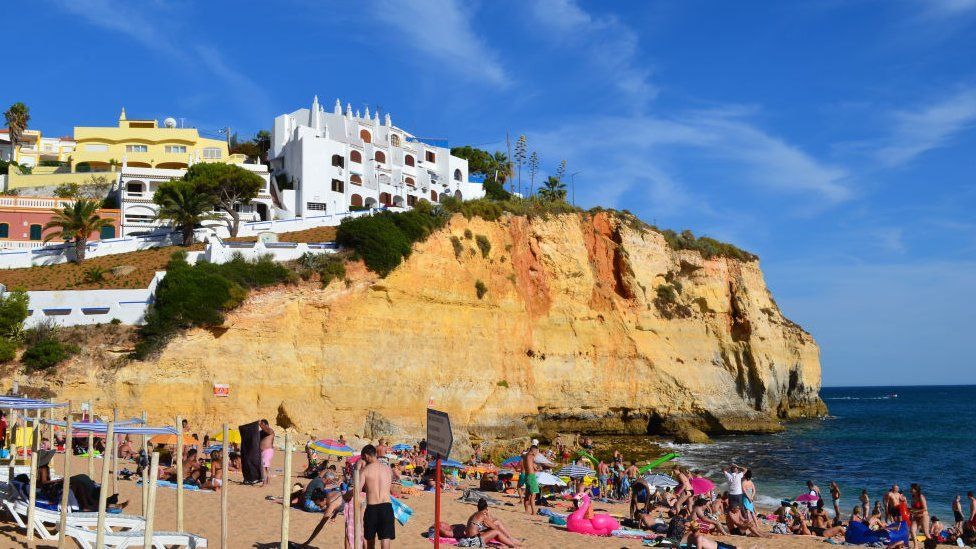 Portugal will be removed from the "red list" of countries from where travel to England is banned after 04:00 GMT on Friday, the Department for Transport has announced.

It means returning travellers will be able to quarantine at home, rather than in a hotel at a cost of £1,750.

But Ethiopia, Oman, Somalia and Qatar will be added to the travel ban list.

Under the current rules, foreign travel from the UK is banned apart from for exceptional reasons.

The earliest date people from England will be able to travel abroad for a holiday is 17 May, when the government hopes to move to step three of its lockdown exit plan.

However, Transport Secretary Grant Shapps last week warned it was still too early to book foreign summer holidays, saying there were "lots of questions" to answer about "how safe it will be in June to travel".

The "red list" is part of travel regulations aimed at stopping Covid variants entering the country.

After the changes come into force, British and Irish citizens or residents arriving in England from Ethiopia, Oman, Somalia and Qatar will have to quarantine in a government-approved hotel for 10 days, and any other visitors will be refused entry.

A ban on commercial and private planes travelling from Oman, Ethiopia and Qatar will also come into force on Friday to reduce the risk of importing "variants of concern".

In a statement, the Department for Transport added that Portugal had been removed from the red list, including Madeira and the Azores, following evidence that showed the risk of importing a variant "had reduced".

Mauritius will also be removed from the red list.

Meanwhile, Portugal has extended until 31 March a ban on commercial or private flights between mainland Portugal and the UK, as part of continued restrictions to limit the spread of the coronavirus.

Portugal's government has said that only flights "of a humanitarian nature" are allowed to and from the UK.

Qatar's international airport is popular for people returning to the UK on connecting flights from countries in Asia and Australasia, so its addition to the red list will have a significant impact.

A travel ban is already in force for the United Arab Emirates, which is another Gulf hub.

Under current lockdown rules, people arriving in the UK now have to take two coronavirus tests while quarantining, and some must pay to self-isolate at a hotel.

There are concerns existing vaccines may not work quite so well against some variants of coronavirus, including the South Africa and Brazil variants.

As such, there are currently travel bans on countries "where the risk of a new variant is greatest".

UK residents and Irish nationals arriving in England from red list countries have to quarantine in hotels selected by the government.

Rule-breakers face stricter penalties, including a prison sentence of up to 10 years for those who lie about having been in a banned "red list" country.

The UK's devolved nations have the power to set their own coronavirus restrictions, meaning Scotland, Wales and Northern Ireland have their own travel rules, which differ slightly.