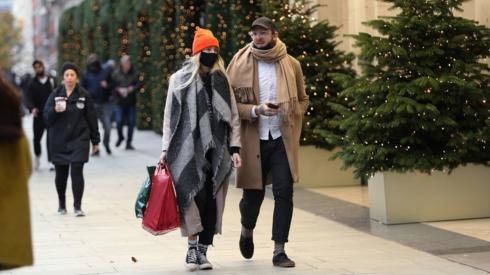 Boris Johnson told the Commons that the three-tiered regional measures will return from 2 December, but he added that each tier will be toughened.

Spectators will be allowed to return to some sporting events, and weddings and collective worship will resume.

Regions will not find out which tier they are in until Thursday.

The allocation of tiers will be dependent on a number of factors, including each area's case numbers, the reproduction rate - or R number - and the current and projected pressure on the NHS locally.

Tier allocations will be reviewed every 14 days, and the regional approach will last until March.

The PM, who is self-isolating after meeting an MP who later tested positive for coronavirus, told MPs via video link he expected "more regions will fall - at least temporarily - into higher levels than before".

He said he was "very sorry" for the "hardship" that such restrictions would cause business owners.

Speaking later at a Downing Street briefing, Mr Johnson added that "things will look and feel very different" after Easter, with a vaccine and mass testing.

He warned the months ahead "will be hard, they will be cold" - but added that with a "favourable wind" the majority of people most in need of a vaccination might be able to get one by Easter.

Until then, the PM said, there would be a three-pronged approach of "tough tiering, mass community testing, and [the] roll-out of vaccines". 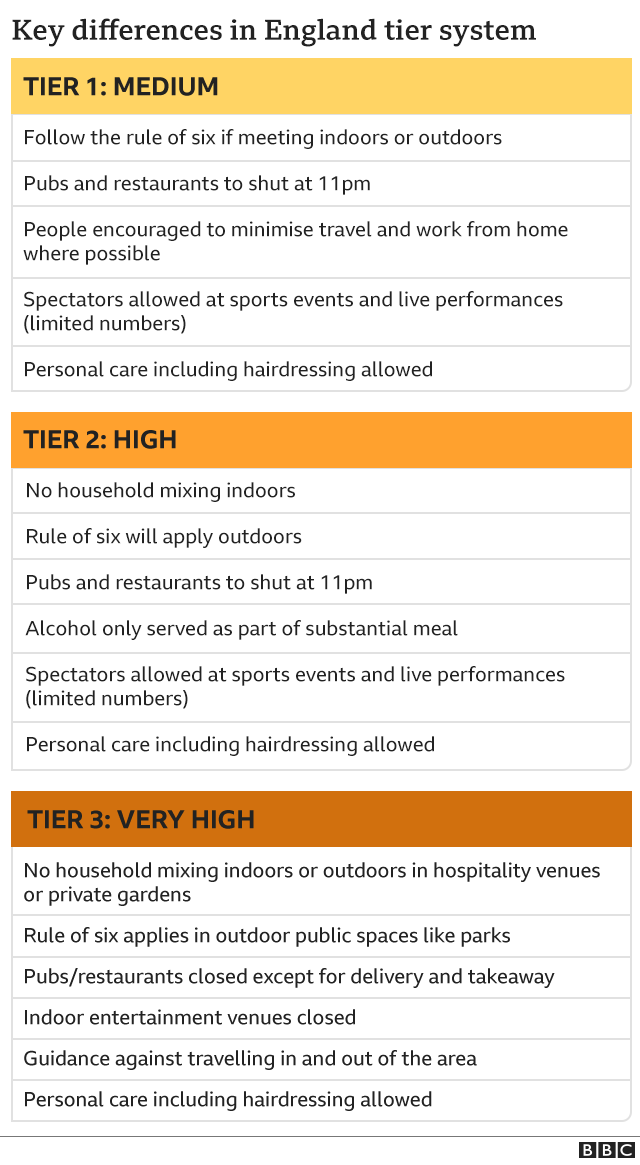 Describing how the tiers had become tougher, the PM said:

* In tier one, people should continue to work from home where possible


* In tier three, hospitality will close except for delivery and takeaway, and indoor entertainment venues must also close.

Where pubs and restaurants are allowed to open, last orders will now be at 10pm, with drinkers allowed a further hour to finish their drinks.

Indoor performances - such as those at the theatre - will also return in the lower two tiers, although with reduced capacity.

In all tiers, exceptions apply for support bubbles. From 2 December, parents with babies under the age of one can form a support bubble with another household.

Mr Johnson said the tiers would now be a uniform set of rules, with no negotiations on additional measures for any particular region.

Measures in Scotland, Wales and Northern Ireland continue to be decided by the devolved administrations, but a joint approach to Christmas, involving all four nations, will be set out later in the week.

The prime minister said: "I can't say that Christmas will be normal this year, but in a period of adversity time spent with loved ones is even more precious for people of all faiths and none.

"We all want some kind of Christmas; we need it; we certainly feel we deserve it.

"But this virus obviously is not going to grant a Christmas truce… and families will need to make a careful judgement about the risks of visiting elderly relatives."

For the third week running we have had some positive vaccine news, but the announcement about the toughened tiers is a reminder, if we needed any, that the next few months will be tough.

Ministers and advisers have been hinting for the past week that the tiers will be toughened - and that is exactly what has happened.

Attention will now naturally turn to which areas will be in which tiers.

Deciding that is a complex equation that will take into account whether the cases are going up or down, the percentage of tests that are positive, hospital pressures and infection rates among older age groups.

To give a flavour of how complex this is places in the North West and Yorkshire have some of the highest rates but they are falling the fastest.

London and the South East have lower rates and more hospital capacity but cases are going up.

Fine judgements will have to be made. We will find out on Thursday.

Mr Johnson also announced changes to sport for both spectators and participants.

While elite sport has continued behind closed doors during the lockdown, grassroots and amateur sport has been halted since 5 November.

From 2 December, outdoor sports can resume, while spectators will be allowed to return in limited numbers. Some organised indoor sports can also resume.

In tier three, fans will continue to be barred from grounds.

In tiers one and two, business events can also resume inside and outside with tight capacity limits and social distancing, as can indoor performances in theatres and concert halls, the government's plan says.

He added that decisions on which areas will belong to each tier must be taken without delay - "I just can't emphasise how important it is that these decisions are taken very quickly and very clearly so everybody can plan.

Helen Dickinson, of the British Retail Consortium, said shops would be "relieved" at the decision to allow them to reopen.

"Sage data has always highlighted that retail is a safe environment, and firms have spent hundreds of millions on safety measures including Perspex screens, additional cleaning, and social distancing and will continue to follow all safety guidance," she said.

But the UK hospitality industry warned the new rules "are killing Christmas and beyond" and said pubs, restaurants and hotels faced going bust.

Meanwhile, a further 15,450 positive coronavirus cases were recorded across the UK on Monday. There have also been a further 206 deaths within 28 days of a positive test. Figures can be lower on a Monday, due to a lag in reporting.

Earlier, it was announced that daily coronavirus tests will be offered to close contacts of people who have tested positive in England, as a way to reduce the current 14-day quarantine period.

Mr Johnson said people will be offered tests every day for a week - and they will not need to isolate unless they test positive.

He also said rapid tests will allow every care home resident to have up to two visitors tested twice a week.

"People will be able to leave their home for any purpose," says Prime Minister Boris Johnson