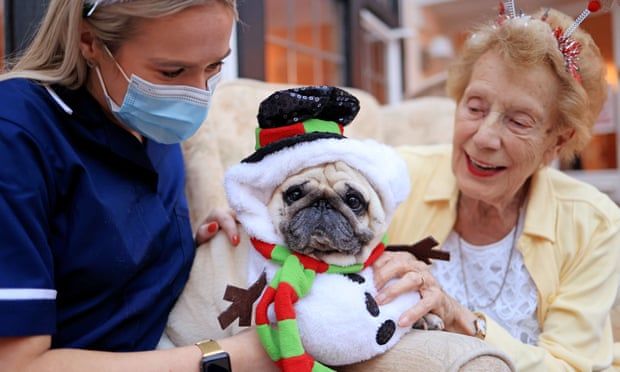 Local Government Association wants policy rethink to earmark 85% of social care tax receipts for NHS
Town halls in England are calling for billions of pounds a year earmarked for the NHS to be diverted to social care amid warnings of severe care worker shortages and hundreds of thousands of people not getting the help they need.

The cross-party Local Government Association wants a rethink of the government policy announced in October, which is to reserve 85% of receipts from the new 1.25% health and social care tax for the health service. It warned the measures, announced to deliver Boris Johnson’s promise to “fix social care”, fail to deal with “immediate, frontline pressures facing care services right now”.

The demand “to immediately redirect a significantly greater share of the levy to frontline adult social care” comes amid concern the social care crisis is preventing hospital discharges amid rising Omicron admissions. A four-star hotel in Bristol has become the latest makeshift care home to be pressed into action, after NHS England’s chief executive, Amanda Pritchard, told hospital bosses to use hotel beds to prevent discharge blockages when conventional community care is unavailable.

Across the UK, almost half of homecare providers also now say they can no longer take on new work, with worker shortages a key problem. A total of 38% said they were handing back contracts to councils and the NHS because they could no longer deliver, a survey by the Homecare Association found. Meanwhile, 95% of the largest private care home chains are struggling to find care staff, according to a poll published on Tuesday by the industry group Care England.

Ministers have said the new national insurance levy starting in April 2022 would deliver £12bn a year for the NHS and social care, but only £1.7bn would go to social care. The LGA has calculated that councils need up to £9.5bn a year more by 2025 to cover unmet care packages, increase pay and finance care homes fairly.

“We recognise the NHS faces a significant backlog which needs to be tackled, but so does social care, which faces huge challenges in addressing unmet and under-met need, workforce shortages and care worker pay,” said David Fothergill, the Conservative leader of Somerset county council and chairman of the LGA’s community wellbeing board. “Otherwise we are building towards a future based on inadequate foundations.”

He added: “This means some people cannot access any or as much of the care as they need, impacting upon their quality of life, and also has a direct knock-on effect on getting people out of hospital and into their homes and communities, which is both bad for the individual and for the health service.”

The latest hotel to be used as a care facility is the city-centre Bristol hotel, which is due to start taking patients from hospitals in Bristol, north Somerset and south Gloucestershire from Wednesday. Up to 30 patients will be discharged into rooms on one floor, supported by live-in staff on another. Local health chiefs describe it as “a temporary care facility” to “release much-needed hospital beds” with “rising Omicron cases likely to add to further strain in the coming weeks”.

At least three other hotels have been pressed into use in the south of England, including in Plymouth, despite concerns they do not match care home conditions. The operator, Abicare, said it has been recruiting live-in workers from Spain, Greece and African countries who already have rights to work in the UK.

The Health Foundation thinktank has calculated that funding for social care needs to increase by £4.8bn a year to stabilise the system and £9.3bn a year to enable it to recover. Under the government’s plan, most of the additional £1.7bn a year will cover the cost of the new £86,000 cap on lifetime care bills, aimed at ensuring people who pay for their own care are not forced to sell their homes.

“What the government is proposing to inject into social care is nowhere near enough to address the issues,” said Mike Padgham, the chair of the Independent Care Group, which represents care operators in Yorkshire. “Some £8bn has been cut from social care budgets since 2010 … Financial cutback after financial cutback has left the provision of care in tatters.”

Last week, ministers announced an additional £300m to fund retention bonuses for care staff amid an exodus of workers, but with payments so far only allowing for bonuses ranging from £60 to £150 a worker, and operators fear the additional funds may have limited impact.

The Department of Health and Social Care has been contacted for comment.
#Boris Johnson  #Johnson
Add Comment