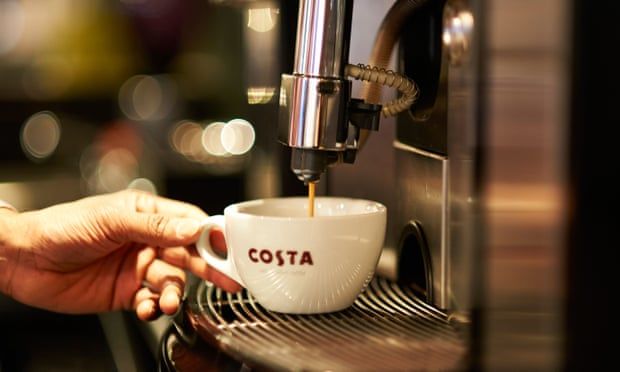 The company, which was bought out by Coca-Cola in 2018, said that from 1 October all store team members would receive increases of at least 45p an hour, raising minimum pay to £9.36 an hour, up from £8.91, thenational minimum wage for those aged over 23. Top rates of pay, depending on location and experience, will increase from £10.64 an hour to £11.29.

Other perks include a quarterly incentive scheme, free coffees on shift, a team member support fund and a pension scheme. The company confirmed staff would not be paid during their statutory breaks.

Neil Lake, the managing director of Costa Coffee UK and Ireland, said: “Our team members are the heart of our business and as we continue to emerge stronger from the pandemic, this 5% pay increase is one way we are able to show our thanks to them.

“Our teams have been through the most challenging year and a half in living memory and have shown incredible passion, resilience, and commitment as they continue to serve perfectly crafted cups of Costa coffee to consumers across the country. We are committed to putting our team members first, investing in their safety and wellbeing and their long-term development, ensuring we remain a great place to work for all our current team members and the 2,000 team members we’ll be welcoming in the coming months.”

The pay rise comes amid a recruitment squeeze that has forced up wages for some lorry drivers, fruit pickers and chefs as businesses battle to retain and hire them.

The Covid-19 pandemic has worsened problems caused by Brexit, which prompted thousands of EU nationals to leave the UK.

Recent research by the job search group Indeed found rapid growth in vacancies in food preparation and service, as well as in cleaning and sanitation, customer service, driving and retail. As a result, food service jobs are paying 3.7% more than they did in February when the UK government announced its “roadmap” out of lockdown.

However, not all companies have followed the rising pay trend. Costa’s pay increase announcement came after a pay cut at struggling rival Pret a Manger, which has permanently ended paid breaks, resulting in a 6% pay cut those on an eight-hour shift. The majority of Pret staff earn £8.91 but about 80% of them receive a £1 an hour bonus if they give satisfactory service judged by a mystery shopper.
#COVID-19  #Covid
Add Comment