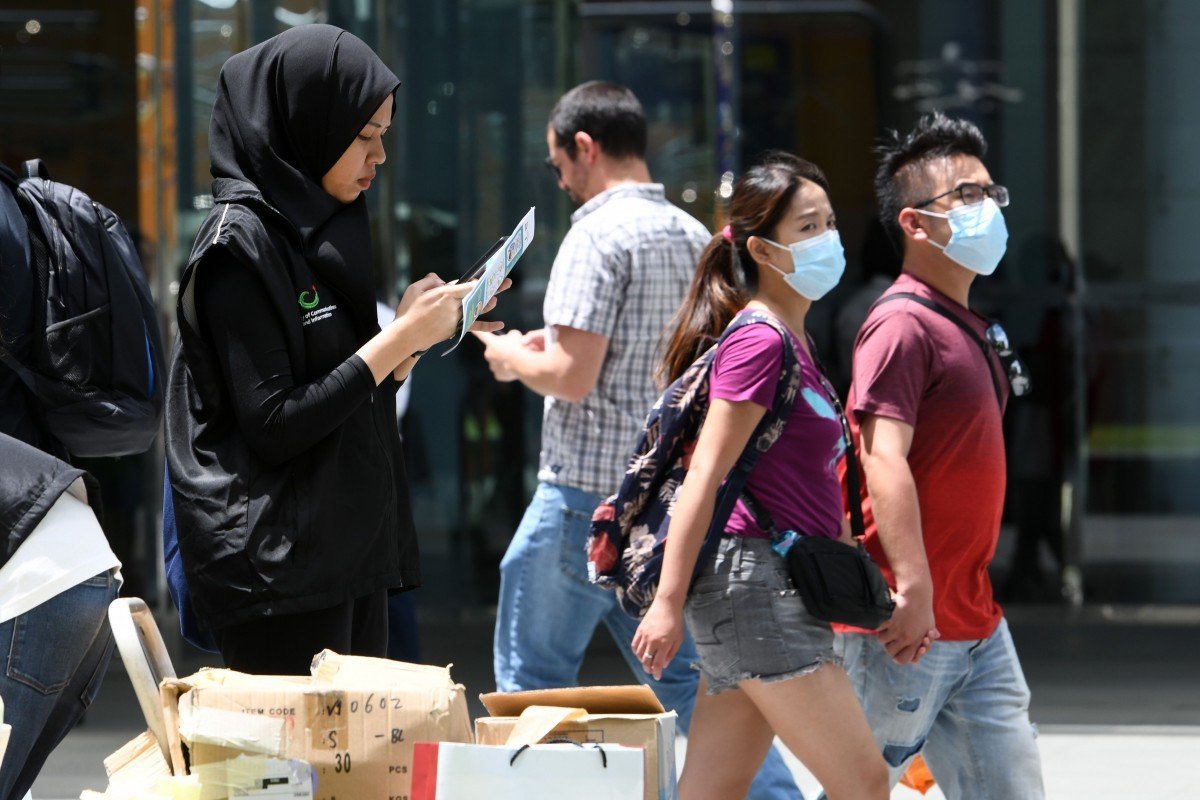 New cases in three people – including a high school teacher – who had not visited China and are not linked to previous infections. Schools to suspend external events, hospitals to screen visitors as Dorscon alert raised to orange – sparking a frenzy of grocery shopping

Singapore on Friday raised its alert level as it reported three more coronavirus infections in patients with no links to previously diagnosed cases and who had not recently visited mainland China.

The new cases signal that there is now community spread of the disease, something National Development Minister Lawrence Wong called an “eventuality”.

The previously diagnosed 29 cases were of people who had either visited mainland China, including Wuhan, the epicentre of the outbreak, or who had come into contact with travellers from China – including a group of people who worked at a shop catering to Chinese tourists, and their family members.

The first case with no link either to mainland China or to previous cases in Singapore emerged on Thursday in a 41-year-old man who developed a fever on January 28 and was admitted to hospital on February 3. Three more cases followed on Friday. Speaking on Friday, Health Minister Gan Kim Yong said investigations into the first case had “not been able to establish a link to previous cases or any travel history to mainland China”.

He said Singapore had been preparing for this scenario and was “ready to manage the situation”.

“There are now cases that we are unable to determine the source of infection, they are not linked to any existing cases nor linked to travel history to China. And therefore we suspect the sources of the infection are in the community.”

He said that as a result, Singapore’s Disease Outbreak Response System Condition (Dorscon) would be raised from yellow to orange, schools will suspend interschool and external activities until the end of the March school holidays. Hospitals will tighten control of entry points and screen the temperatures of incoming patients and visitors.

The Dorscon indicates the current situation and corresponds to an action plan by authorities. Raising the alert level to orange means the disease is severe, spreading easily from person to person, but is not widespread and is being contained. During the Sars outbreak, the alert was pegged at orange and schools were closed for 10 days while companies made staff work from home.

Orange is one step below the highest level, red, which signifies an out of control pandemic, where schools would be shut for a prolonged period, among other measures.

In a media statement on Friday, the health authorities advised organisers of large-scale events to take additional precautions such as screening people’s temperatures, maintaining registration lists, and increasing the frequency of cleaning of commonly-used areas.

Employers should also require employees to take their temperatures regularly and plan for employees to work from home or divide the workforce into segregated teams.

The coronavirus has infected more than 31,000 people and killed 638, with the bulk of the cases in mainland China. Outside China, Japan has the highest number of infections at 86. Singapore follows with 33 and Thailand with 25.

Of Singapore’s cases, two have been discharged and two are in critical conditions in intensive care.

Said Gan: “I understand that Singaporeans are anxious and concerned and there is much that we do not yet know about the virus – new information is emerging every day. We expect that this [will] take time to resolve, maybe months. Life cannot come to a standstill but we should take all the necessary precautions and carry on with life.”

In the wake of the coronavirus outbreak, Singapore has been bombarded by fake news, including a doctored news account circulated via WhatsApp on Friday afternoon saying that schools were to be closed from Monday onwards.

Although that post and others like it were quickly debunked, some citizens have still felt panicked. Communications manager Kai Ho, 29, said she felt compelled to go to the supermarket after her friends told her to stock up on items like vitamin C, protective masks, groceries and fresh food. She found the shop crowded, especially in the canned food aisle, and although she said she felt silly, she did ask herself: “What if food delivery companies stop operating?”

In a Facebook post on Friday, Minister for Trade and Industry Chan Chun Sing acknowledged the photos of empty shelves in supermarkets circulating on social media. He said there was no need for Singaporeans to rush for essential supplies like rice or instant noodles, adding that the ministry is in close contact with retailers and “our supply lines for these essentials are intact and there is no risk of us running a shortage of essential food or household items”.

My auntie just took this photo from her local supermarket in #Singapore. Everyone's getting a little more on edge here since the gov raised the outbreak response to orange. Hoping everything eases out soon. #CoronavirusOutbreak pic.twitter.com/0IJVv3IAYB

Singapore also has a national stockpile for essential items, he said.

Companies such as DBS Bank have announced business continuity measures, with its employees being told over WhatsApp that some front office staff are to work at home from Monday onwards. The bank has also come stopped all work trips, according to the social media post.

But in central Singapore, life went on as usual. At Boat Quay, office workers were taking advantage of happy hour prices as they would on any other Friday.

One of them was Andrew McGrath, chief financial officer at an insurance firm. “It looks like the virus is already everywhere and is hard to contain. So I’m taking sensible precautions as the health ministry recommends but I’m not letting it interfere with my life,” he said.