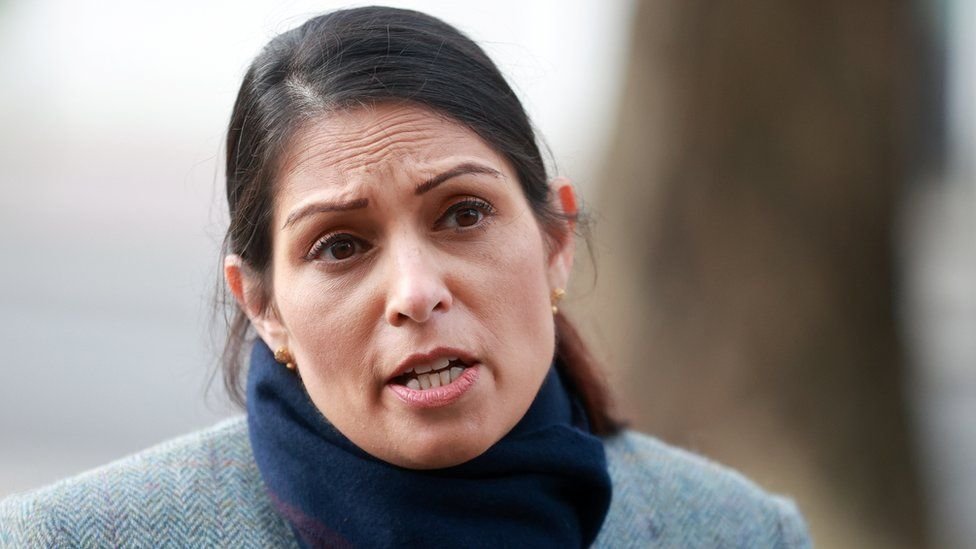 In a video call obtained by Guido Fawkes, the home secretary told Tory supporters she was an "advocate" of closing the borders 10 months ago.

Between mid March and June, the UK did not impose a ban or quarantine restrictions on international travellers arriving in the UK.

A Home Office spokesman said there were now "strong measures" at the border.

Mr Johnson responded that the UK had now "instituted one of the toughest border regimes in the world", accusing Sir Keir of "looking backwards, playing politics and sniping from the side-lines" amidst the pandemic.

Asked for a further response, a No 10 spokesman said they would not "get into the detail of private conversations", and that the PM had full confidence in his home secretary.

Throughout February 2020 and into March, the government had guidance in place international travellers from the Hubei province in China, parts of South Korea, Iran and Italy to self-isolate for 14 days after arriving in the UK.

But on 13 March 2020, this rule was removed and replaced with guidance advising all people in the UK, including arrivals, to self-isolate if they developed symptoms.

It was not until June that quarantine rules were introduced for all arrivals in the UK - including British citizens - and by July, so-called "travel corridors" were introduced, removing the need to self-isolate when coming to the UK from certain countries.

Transport Secretary Grant Shapps made weekly announcements on which countries were included on the list - but on Monday, the government closed all travel corridors to "protect against the risk of as yet unidentified new strains" of coronavirus.

The government was criticised for acting too late over border policy, with the Home Affairs Committee of MPs publishing a report in August, saying a lack of measures earlier in the pandemic was a "serious mistake" and the change in rules in March was "inexplicable".

A Home Office spokeswoman responded to the criticism at the time saying all government decisions had been "been guided by the science, with appropriate measures introduced at the right time to keep us all safe".

Now the home secretary has been recorded telling a Zoom call with the Conservative Friends of India group on Tuesday night: "On 'should we have closed our borders earlier', the answer is yes, I was an advocate of closing them last March."

Only a short excerpt of Priti Patel's remarks has emerged, but there's been no denial or suggestion that the comments were taken out of context.

Interestingly, back in April, the home secretary told MPs the scientific advice was "clear" that measures to screen arrivals would have had a "negligible impact" on virus rates.

If that was the scientists' view, her remarks on Tuesday night suggest that, behind the scenes, she had in fact been arguing for tougher controls.

Of course it's not unusual for ministers to debate a point in private. But once a policy is decided, they're expected to stick by it - the principle of "collective responsibility".

The ministerial code specifically says that a "united front" must be maintained.

So Priti Patel may face questions as to whether she has breached that code by revealing her hand, albeit on what we're told was a private call.

However, No 10 has made clear the prime minister still has confidence in his home secretary.

And, as far as Priti Patel's concerned, the idea she wanted a tougher approach may bolster her reputation with some party members.

Ms Patel repeatedly refused to appear before the Home Affairs Committee between January and April last year, turning down four invitations and offering private briefings instead.

When she did appear on 29 April last year, she was asked by Labour MP Stephen Doughty if she disagreed with the change in rules around self-isolating in March.

She replied: "We all follow the advice that is given from the government."

The committee's chair, Labour MP Yvette Cooper, told BBC News the "partial admission" that the government were wrong last year was an "astonishing statement" from the home secretary, who she had repeatedly questioned over the subject.

Ms Cooper said the government's handling of border policy had been "chaotic and badly managed at every stage", and it had "contributed to the scale and the pace of the pandemic and made the pandemic worse".

Asked about the home secretary's comments on BBC Two's Politics Live programme, Tory MP and Chair of the Foreign Affairs Committee, Tom Tugendhat, said there were "a lot of benefits of hindsight here".

He added: "It is certainly true with hindsight we should have closed the borders last March.

"But I think the government has been making some very difficult decisions to try and keep an economy open that can pay for the healthcare that we all need at the same time as protecting as many people as possible and protecting lives."

However, Labour's shadow home secretary, Nick Thomas-Symonds, said it was a "shocking admission" from Ms Patel, and the government had "left our doors open to the virus and worrying mutations".

He added: "Ministers now need to - urgently - review and overhaul border policy, whilst taking responsibility for the huge damage their incompetence has done to our national safety and security."

Asked about Ms Patel's comments on the call, a Home Office spokesman said: "We have strong measures at the border in place which are vital as we roll out the vaccine."

Would closing borders in March have made a difference?

Detailed analysis of coronavirus samples has revealed how and when the virus got into the country.

The UK's epidemic was largely started by travel from Italy in late February, Spain in early-to-mid-March and France in mid-to-late-March.

China, where the pandemic started, had a negligible impact.

Completely shutting the borders in March could have prevented some of those cases from Spain and France coming in and sparking more outbreaks.

But it is clear the virus was here and spreading by that point.

So the best case scenario is it could have bought a bit of time, which begs the question "to do what?".

You have to view border control as only one part of the government's overall strategy.

New Zealand, which has faced minimal disruption from Covid, used its closed borders alongside lockdown to go for a "zero-Covid strategy", which has never been on the cards in the UK.