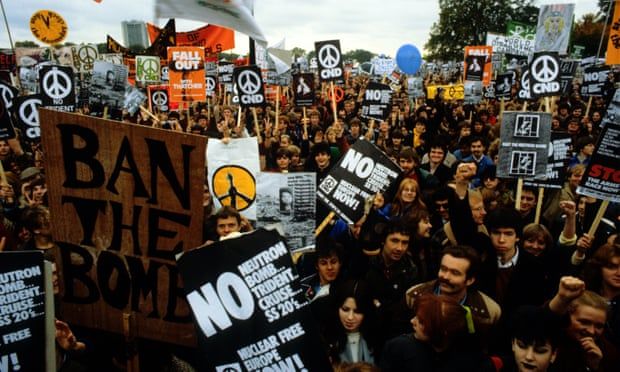 CND calls for answers from inquiry over 1980s police infiltration

Demand follows confirmation by inquiry that undercover officer was planted in campaign HQ from 1981 to 1984
A leading anti-nuclear campaign has called on a public inquiry to conduct a thorough examination of how undercover police officers infiltrated its movement at a time when it powerfully challenged government policies.

The Campaign for Nuclear Disarmament (CND) issued its demand after the inquiry, led by the retired judge Sir John Mitting, confirmed that police planted an undercover officer, John Kerry, in its headquarters between 1981 and 1984.

The inquiry has also disclosed that police deployed an undercover officer to spy on a local CND group in east London in 1985 and 1986, and another to infiltrate the Greenham Common peace camp between 1983 and 1986.

At least two other anti-nuclear groups were monitored by undercover police officers in the 2000s.

Mitting has said that he wants to examine why police spied on CND and other peace protesters when they “posed no serious threat to public order”.

The long-running inquiry is scrutinising the conduct of undercover police officers who spied on more than 1,000 mainly progressive political groups over more than four decades in lengthy deployments that started in 1968.

CND attracted huge support during the 1980s when, in a dangerous phase of the cold war, many feared that tensions between the west and the then Soviet Union would lead to nuclear conflagration.

At that time, CND organised large demonstrations – one of which numbered an estimated 300,000 people in London – to protest against the government’s policy of expanding Britain’s nuclear arsenal and allowing American nuclear weapons to be located on British soil. The movement was put under surveillance by the security agency MI5. The monitoring included tapping the phones of CND leaders.

The general secretary of CND, Kate Hudson, said: “CND has a long record of democratic engagement, working in a peaceful and open way to question and challenge government policies that put citizens in the way of great harm. We have been part of the very fabric of British society for over six decades, working widely across civil society.

“It is shocking to discover that public resources were wasted on ‘infiltrating’ CND as if we were a risk to life and limb or a threat to the security of the realm. We hope that the inquiry will provide us with an understanding of why this happened and help to ensure that our democratic rights to peaceful protest are assured.”

During a four-year deployment, an undercover officer used the fake name of Timothy Spence to spy on local CND activists in east London as well as other local campaigns. Another officer adopted the fake name of Kathryn “Lee” Bonser to spy on the Greenham women’s camp and a small south London group, Lambeth Women for Peace.

In one of the most famous feminist campaigns in recent history, thousands of women camped outside the Greenham Common military base in Berkshire between 1981 and 2000 to protest against nuclear weapons.

Other anti-nuclear groups were also infiltrated more recently. In the 2000s, Lynn Watson, an undercover officer, spied on a group of women who protested against the Aldermaston nuclear weapons base in Berkshire.

Mitting has disclosed that an unidentified undercover officer gathered information about a peace group that initiated a continuous protest in 2006 and 2007 in Scotland outside Faslane naval base, which is home to the Trident nuclear missile fleet. He has not given any details of the surveillance of the group, which was called Faslane 365.
Add Comment