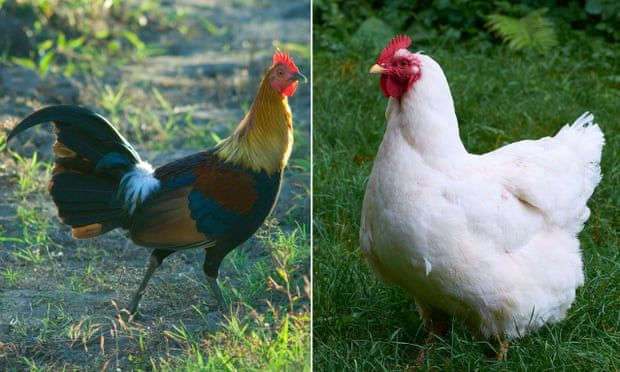 Chickens were first tempted down from trees by rice, research suggests

Close human contact only started about 3,500 years ago and birds were initially venerated, find archaeologists
Chickens were originally tempted down from the trees and into domestication by rice, according to research.

Chicken is one of the most popular foods in the world today, with more than one billion birds slaughtered annually in the UK alone. But researchers at the University of Exeter, the University of Oxford and Cardiff University say in a new study that the birds are actually a relatively new addition to our farms.

It was previously believed that chickens were bred for the table up to 10,000 years ago, but the new report, published in the journal Antiquity, suggests humans did not come into close contact with chickens until about 1500BC.

The researchers used carbon dating to establish the age of 23 of the proposed earliest chickens found in western Eurasia and north-west Africa. Most of the bones were far more recent than previously thought.

Dr Julia Best, from Cardiff University, said: “This is the first time that radiocarbon dating has been used on this scale to determine the significance of chickens in early societies. Our results demonstrate the need to directly date proposed early specimens, as this allows us the clearest picture yet of our early interactions with chickens.”

Chickens, native to the tropical jungles of south-east Asia, did not arrive in Europe until about 800BC. Then, after arriving in the Mediterranean region, it took almost 1,000 years longer for chickens to become established in the colder climates of Scotland, Ireland, Scandinavia and Iceland.

The experts re-evaluated chicken remains found in more than 600 sites in 89 countries. They found that the oldest bones of a definite domestic chicken were at the Neolithic Ban Non Wat in central Thailand, dating to between 1650BC and 1250BC.

Researchers say that humans came into contact with the jungle birds, which lived high up in trees, during dry rice farming. The ancient ancestors of domestic chickens were tempted down from the trees by the rice.

Once they’d been domesticated, the chickens were transported first across Asia and then throughout the Mediterranean along routes used by early Greek, Etruscan and Phoenician maritime traders.

Prof Greger Larson, from the University of Oxford, said: “This comprehensive re-evaluation of chickens firstly demonstrates how wrong our understanding of the time and place of chicken domestication was. And even more excitingly, we show how the arrival of dry rice agriculture acted as a catalyst for both the chicken-domestication process and its global dispersal.”

Previous research showed that chickens were not initially domesticated for food, but as exotica. Earlier studies have found that chickens appeared to be respected in iron age society, for example, and were often buried whole and unbutchered, with their hens or sometimes even with their human owners. Chickens and their eggs began to be popularised as food during the Roman empire.

Prof Naomi Sykes, from the University of Exeter, said: “Eating chickens is so common that people think we have never not eaten them. Our evidence shows that our past relationship with chickens was far more complex, and that for centuries chickens were celebrated and venerated.”
Add Comment