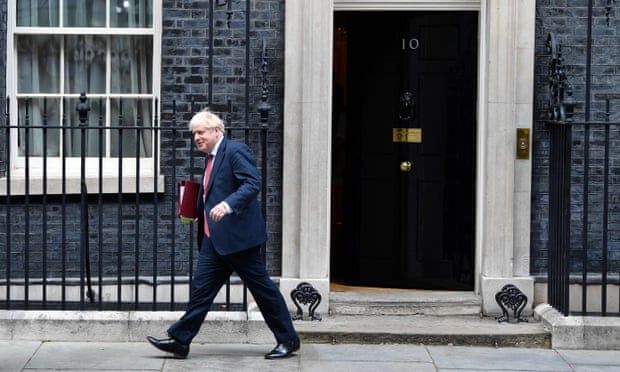 Boris Johnson has been called “Mr U-turn” in his time as prime minister this reputation has been well-earned. A conservative count gives more than 30 often panicked policy changes since the 2019 general election.

31 January 2020
The BBC quoted the prime minister as saying the “best thing would be to ignore” Covid around the time the first UK case was detected; a claim Downing Street declined to deny. Ministers soon had to take drastic action.

12 March 2020
Mass testing was ended despite World Health Organization (WHO) advice that it was vital. The health secretary, Matt Hancock, subsequently announced a target of 500,000 tests a day by the end of October 2020.

20 May 2020
A scheme granting indefinite leave to remain in the UK to relatives of foreign national NHS staff who died from Covid-19 initially excluded cleaners, porters and social care workers. It was eventually extended to low-paid workers.

21 May 2020
Johnson backed away from a policy requiring people coming to the UK to work for the NHS to pay a health surcharge.

16 June 2020
Johnson belatedly bowed to pressure to help feed hungry children outside school term time, insisting he had been unaware of his own government’s concerted fight against the England footballer’s campaign.

18 June 2020
Several months and millions of pounds after backing an NHS anti-Covid app, ministers finally acknowledged it would not work.

9 June 2020Johnson insisted primary schools in England should reopen. But ministers eventually agreed to listen to experts who had warned the plan was unworkable.

14 July 2020
Johnson had ignored Washington’s warnings that Huawei posed a threat. But he backtracked and it was announced that Huawei kit would be stripped out of the 5G phone networks.

10 August 2020
Ministers finally agreed to adopt a regional approach to contact tracing – following the examples of some foreign nations – after months of pursuing a £10bn centralised contact-tracing model.

15 August 2020
Johnson initially insisted 2020’s A-level results were “robust” and the education secretary said there would be no U-turn on their calculation. Within two days, the government U-turned.

25 August 2020
Days before secondary schools in England were due to reopen, Johnson scrapped his government’s plan to advise against wearing face masks.

20 August 2020
Ministers made a series of threats to lift the ban on evictions imposed during the pandemic – including in August 2020 – and relented several times.

31 October 2020
Having ignored scientific advice in favour of a two-week national “circuit breaker” lockdown for England in September, Johnson announced a month-long lockdown for November.

5 November 2020
The chancellor had looked to wind down the furlough scheme. But he was forced into a series of embarrassing climbdowns because of the scale of the second coronavirus wave.

8 November 2020
Ministers took up the fight against Rashford once again. And, once again, they backed down; announcing a £170m winter grant scheme for families struggling due to Covid.

19 December 2020
Johnson again tried to avoid making a decision on Covid restrictions and, again, was forced to belatedly introduce them. The nation’s Christmas plans were plunged into chaos.

Lockdown a day after opening schools

4 January 2021
A day after urging children to return to classrooms, insisting it was safe, Johnson announced it was not safe even to leave the house and locked England down.

18 July 2021
The prime minister and chancellor were forced to self-isolate after coming into contact with the health secretary, who had contracted Covid. They had tried to avoid it, claiming to be part of a pilot testing scheme.

13 July 2021
In his 2019 manifesto, Johnson promised overseas aid spending of 0.7% of GDP. About a year and a half later, he cut billions of pounds from the budget.

17 July 2021
Plans to allow Britons who have had two jabs to return from amber list countries without isolating for up to 10 days were dropped in respect of France – one of the most popular destinations – at the last minute.

21 July 2021
Johnson trumpeted the deal he struck over Brexit. But, within less than two years, his government was already trying to unpick it, claiming it had proven unworkable.

22 July 2021
An insistence that double-vaccinated critical workers would not be exempted from self-isolation was dropped as hundreds of thousands were pinged.

20 August 2021
Ministers backed away from their initial refusal to support 125 Afghan guards who protected the British embassy in Kabul before its fall. It later emerged only one had made it to the UK.

8 September 2021
Johnson was accused of breaking a key manifesto pledge not to raise taxes when his government brought forward plans to hike national insurance contributions.

12 September 2021
Vaccine passport plans were dropped only two weeks after Downing Street insisted it would press ahead. Within another two days, the prime minister raised the prospect yet again.

24 September 2021
With queues forming at fuel stations, ministers were forced to rethink their post-Brexit anti-immigration stance and invite thousands of foreign lorry drivers to the UK.

4 November 2021
Plans to immediately scrap the parliamentary standards system were dropped amid public fury, as the Tories were accused of acting to protect one of their own.

The PM’s own standards

21 April 2022
Tory MPs were initially told to vote for an amendment that would effectively torpedo Labour efforts to place Johnson under parliamentary investigation – only for No 10 to change its mind on the morning of the debate and give MPs a free vote.