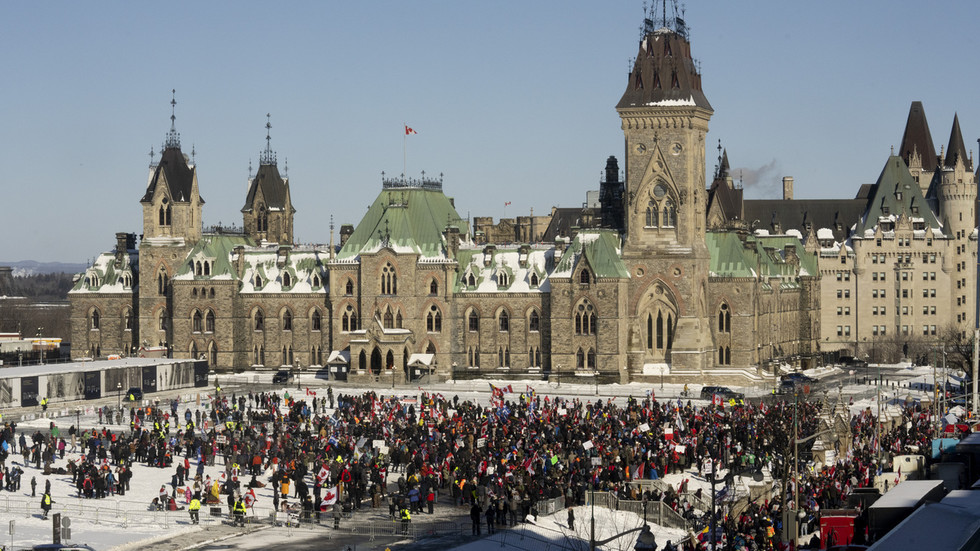 Ottawa mayor Jim Watson has declared a state of emergency, citing “serious danger and threat to the safety and security of residents,” as Freedom Convoy truckers and their pedestrian supporters continue to occupy the capital. The move comes after Watson lamented earlier on Sunday that police have been outnumbered by the demonstrators, and indicated he wants the federal government to help squash the protest.

“The situation at this point is completely out of control because the individuals with the protest are calling the shots,” Watson told Newstalk radio. “They have far more people than we have police officers and I've indicated to the chief that we have to be much more nimble and proactive when it comes to these activities.”

Before announcing the emergency, Watson pleaded with the federal government to “sit down and have some kind of a discussion, some kind of mediation to get this situation resolved because it’s now spreading across the country.”

Watson’s statements echoed an admission from Police Chief Peter Sloly on Saturday. “We do not have sufficient resources to adequately and effectively address this situation while adequately and effectively providing policing in this city,” the top cop said during a meeting with the Ottawa Police Services Board. Referring to the demonstration as a “siege,” he insisted it was “something that is different in our democracy than something I’ve ever experienced in my life.”

While Sloly has repeatedly claimed “all options are on the table,” PM Justin Trudeau last week ruled out deploying the military, acknowledging that such a response should be a matter of last resort. The protesters have promised to hold the line until the government repeals its vaccination mandates and QR code “health passports.”

Some 5,000 people and 1,000 vehicles descended on downtown Ottawa on Saturday, joining the multitudes already present on the tenth day of the ongoing demonstration. A smaller counter-protest took place at City Hall.

Police boasted that 450 tickets had been issued in the “red zone” around Parliament Hill since Saturday morning, though most were for minor infractions such as obstructed license plates, seatbelt violations, fireworks or cell phone usage. The Ottawa Police Service is also investigating alleged threats to public officials and a whopping 200 calls to its hate crime hotline, though they didn’t reveal the target of the “hate.”

The protesters have largely refrained from violence and property damage, though that hasn’t stopped Sloly and other opponents of the convoy from invoking the supposed “insurrection” Capitol riot of January 6th. Authorities have placed heavy barricades at key crossing points throughout downtown and closed roads in an effort to keep out the endless parade of trucks.

Attempts to divert trucks to the Ottawa Baseball Stadium to keep them out of downtown appear to have backfired, with the stadium turning into a “staging area” for the demonstrators with saunas and reportedly even bouncy castles for protesters’ children along with a refueling station and other supplies.

Organizers have indicated they plan to stay in Ottawa for the “long haul,” seeking donations from supporters to cover the costs of fuel, food and lodging. After fundraising platform GoFundMe froze $7 million in donations, they regrouped on Christian competitor GiveSendGo, overloading the platform’s servers as supporters rushed to pledge their money once more.

While Ontario has refused to budge regarding its Covid-19 restrictions, the provinces of Quebec and Saskatchewan have already rolled back some of their stricter measures, while Alberta announced a vote to lift the mandates will be held this week.

Peter 183 days ago
Liberal arrogance: Mistaking obedience and pragmatism with agreement. The majority of Canadians do not agree with the Liberals. And the Liberals are too arrogant to meet with the protesters.
View all comments (2)Add comment