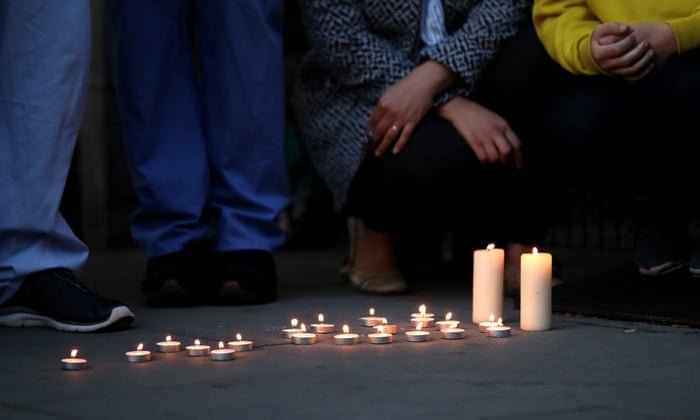 Most deprived areas of England and Wales has 55.1 deaths per 100,000 people, compared with 25.3 in affluent areas
The government must prioritise health funding for the most deprived regions in the aftermath of the coronavirus crisis, politicians and public health experts have demanded, after new data analysis revealed the devastating scale of the death toll in the poorest parts of England and Wales.

In findings one expert said highlighted the fact that Covid-19 “is not a leveller” as politicians have repeatedly claimed, the Office for National Statistics (ONS) said that those living in the poorest parts of England and Wales were dying at twice the rate of those in the richest areas.

With 55.1 deaths per 100,000 people in the most deprived places compared with 25.3 in the least deprived, the King’s Fund health thinktank demanded the government focus new resources to reverse health inequalities as the crisis eases.

The findings came as another 739 people died across the UK, bringing the total to 27,510. They echo last week’s report from the Guardian that members of ethnic minority groups were particularly badly affected by the virus, with those from BAME backgrounds overrepresented in the toll by 27%.

Responding to the analysis at the government’s briefing on Friday, the health secretary, Matt Hancock, acknowledged the issue, saying: “This is something we are worried about and looking at.”

He added, however, that the findings should be seen in the context of disproportionate deaths among men, older people, minorities and other subgroups. “We’re looking at it in the context of all of the different ways that this disease seems to have a different impact,” he said.

Critics said impact of austerity in the poorest communities was behind the new data. Steve Rotheram, the Labour mayor for the Liverpool city region argued that deprivation must be a factor in how spending is allocated to deal with costs incurred during the crisis.. Liverpool has one of the highest Covid-19 death rates outside London, with 303 deaths, amounting to 81.8 deaths per 100,000 people, and is the local authority to have suffered the biggest cuts to its budget since 2010.

The city region’s councils are already warning of a £137m funding gap between the money they have spent dealing with coronavirus and the funds pledged to them by government, said Rotherham. He called for a change in the methodology of the Treasury’s “green book”, which guides government spending, in order to prioritise the most deprived areas – rather than the per capita approach it currently takes.

“Deprivation should be factored into Treasury-book methodology across the board but specifically in relation to this. Local authorities were promised ‘whatever it takes’. The first allocation of fund was given on a needs basis but the second wasn’t,” he said.

Maggi Morris, a health consultant and former head of public health in Central Lancashire, said the economic policies of Conservative-led governments of the last decade had done nothing to actually help reduce health inequalities. “In fact, they have exacerbated them,” she said.

The government must reverse benefit changes, she said, particularly cuts to housing allowance and the bedroom tax, which had forced more people to live in cramped accommodation where disease spreads more easily.

The ONS data exposed the lie that Coronavirus attacks all equally, she said. “It is not a leveller. More people who are at social economic disadvantage will not only get ill but get iller and will die in numbers greater than the privileged. This disease knows where to find the weakest links.”

London’s poorest boroughs have the highest Covid-19 death rates in led by England and Wales, led by Newham, with 144.3 deaths per 100,000 population, followed by Brent with 141.5 and 127.4 in Hackney. Other local authorities including Hertsmere, Salford, Watford, Luton, Sandwell and Slough also had rates above 65 deaths per 100,000 people.

In Middlesbrough, where 89 people have died of Coronavirus – which amounts to 79 deaths per 100,000 – male life expectancy is just 75.3, compared with almost 84 in the wealthy London borough of Westminster.

Andy McDonald, the local Labour MP, said: “The health profile of Middlesbrough is awful and we know what that’s about. It’s about poverty and inequality and you can’t get away from that.”

The ONS data is age-standardised, which means the age profile of people living in each area has been accounted for. But David Buck, the former deputy director for health inequalities at the department of health and now a policy advisor at the King’s Fund, said he suspected further data analysis would show that younger people were dying from Covid-19 in the poorest areas.

“We know that the more deprived your situation the more likely you are to have co-morbidities such as diabetes. We know that those multiple, long term conditions are much more prevalent the poorer you are but also in a younger age group … I haven’t looked at the data but that would be my bet,” said Buck.

And Dr Zubaida Haque, deputy director of the Runnymede Trust, said the figures show the government can no longer continue a one-size-fits-all approach and that ethnic minorities were overrepresented in the worst-paid and key-worker jobs.

“The government needs to roll out more economic and social measures that also take into account BAME socioeconomic and housing circumstances, such as overcrowding. At the moment, the government has told older people to self isolate, but that’s not a practical solution for older people living in overcrowded housing.”

She added the focus on PPE must include all key workers, not just the NHS.

A Department of Health and Social Care spokesperson said: “We have commissioned urgent work from Public Health England to understand the different factors that may influence the way someone is affected by this virus. We will set out full details in due course.”

Of the 20,283 Covid-19 registered deaths in England and Wales to 17 April, an overwhelming proportion were of people from the poorest areas.
Add Comment