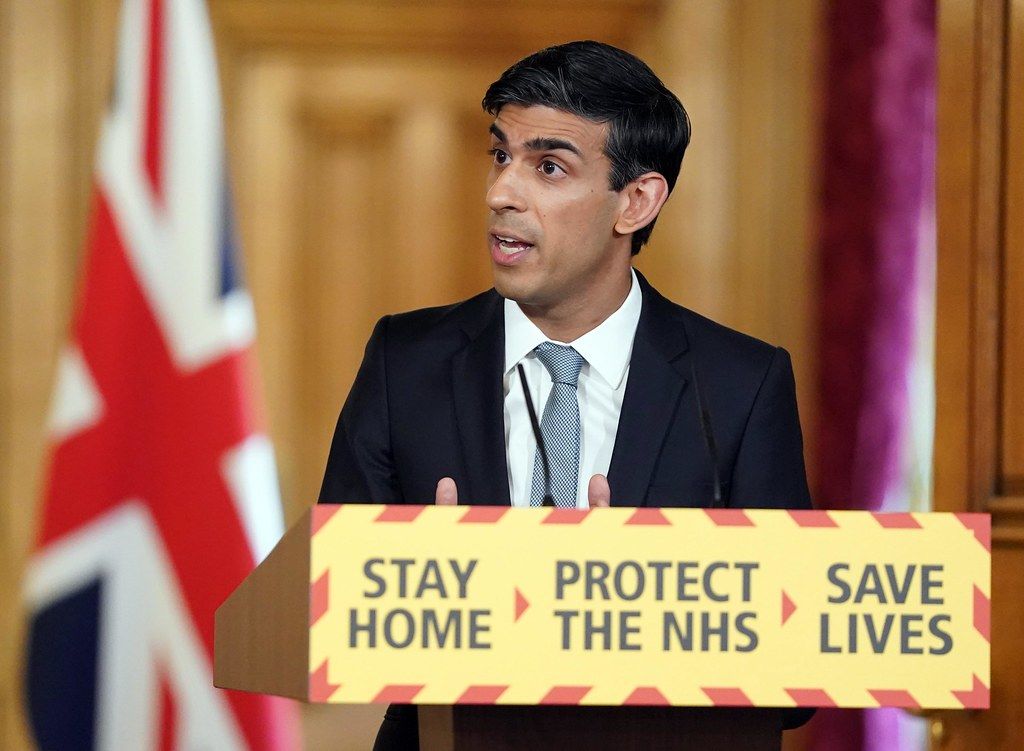 The furlough scheme will be extended to September - along with higher universal credit payments.

But taxes on large company profits will rise in 2023 and a million more people will start paying income tax.

It will take the UK's tax burden to its highest level since the 1960s, said the Office for Budget Responsibility (OBR).

In his Budget speech, Mr Sunak said unemployment will be lower - and growth higher - than previously thought as the UK emerges from lockdown later this year, citing forecasts from the OBR watchdog.

But he warned that repairing the long-term economic damage "will take time", with the economy in five years' time predicted to be 3% smaller than it would have been without the pandemic.

Despite the £280bn of support already committed to protecting the economy, the harm done by coronavirus had been "acute", he told MPs.

"Our economy has shrunk by 10% - the largest fall in over 300 years. Our borrowing is the highest it has been outside of wartime.

"It's going to take this country - and the whole world - a long time to recover from this extraordinary economic situation. But we will recover."

The headline rate of corporation tax will go up from 19% to 25% from 2023, although smaller firms will be exempt.

The Institute for Fiscal Studies said the Budget is set to raise an extra £29bn by 2025-26, which was "big by recent standards".

And it added that the UK's tax "burden" is set to rise to its "highest sustained level" ever.

IFS director Paul Johnson said: "Mr Sunak made much of his desire to be honest and to level with the British people.

"The fact that he felt constrained to raise taxes by hitting companies and through freezing allowances, rather than through more explicit rises in people's taxes, suggests there are limits to how far he wants to level with us, as he attempts to raise the overall tax burden to its highest sustained level in history."

There has been a lot of give, and there will be a lot of take.

Business will, in time, pay billions more. More than a million people will have to start paying income tax, and a million extra will pay at a higher level.

The deeply strange circumstances of the pandemic have turned the party with a theoretical love of low taxes into a government that will crank them up significantly in practice.

"Honest Rishi Sunak", as he hopes to be represented, has chosen his determination to start dealing with the cost of Covid over the Tories' traditional backing for low taxes.

Boxed in by election promises, he has chosen two huge future money raisers.

Despite those hikes, and the hundreds of billions spent on Covid, public spending overall is still set to contract.

The chancellor extended the furlough scheme to September, paying up to 80% of people's wages - and announced further grants for self-employed people, with the scheme widened to include 600,000 who were not previously entitled, including many newly self-employed people.

He also extended the £20-a-week top-up to universal credit for six months.

Other Budget measures include:

*  Eight 'freeports' in England, with lower taxes and "cheaper customs"

*  £408m for museums, theatres and galleries in England to help them reopen when Covid restrictions ease

*  £150m to help communities take over pubs in danger of closing

All alcohol duties will be frozen, which Mr Sunak said would help pubs and restaurants recover, and there will be no increase in fuel duty. But duty on cigarettes will go up by 2%, plus inflation.

The reduced 5% VAT for the hospitality and tourism sector will be extended for six months to 30 September, and will not return to the full standard rate of 20% until April next year.

Mr Sunak also announced that 750 civil service jobs at the Treasury will be transferred to Darlington, in the north-east of England, and there will be more than £1bn shared out among 45 struggling towns in England.

At a post-Budget Downing Street press conference, Mr Sunak vowed to protect people and businesses "well beyond the end of lockdown", and to build a "fairer and more just" country in the memory of those who have lost their lives to coronavirus.

It comes as the latest government figures on Wednesday showed a further 315 people had died with coronavirus in the UK within 28 days of a coronavirus diagnosis, and there were another 6,385 confirmed cases.

Mr Sunak hit back at critics who say the business tax hike will choke off recovery, saying it will "still be the lowest out of the G7 economies," including the US, France and Germany.

"The scale of what the chancellor announced today is nowhere near ambitious enough," he told MPs, and he claimed Mr Sunak was "itching to get back to his free-market principles and to pull away support as quickly as he can".

The SNP's leader at Westminster, Ian Blackford, said furlough should be in kept place "as long as businesses and devolved governments need it".

"This Budget is carefully laying the ground for more Tory austerity, a decade more of Conservative cuts," he told MPs.

Liberal Democrat Treasury spokesperson Christine Jardine warned that the universal credit top-up will end at the same time as furlough, meaning people could lose their jobs and not receive the extra help they will need.

Plaid Cymru said it was a "Budget of half measures and quick fixes", and not making the universal credit uplift permanent would "lead to 26,000 families in Wales not being able to afford essentials in six months' time".