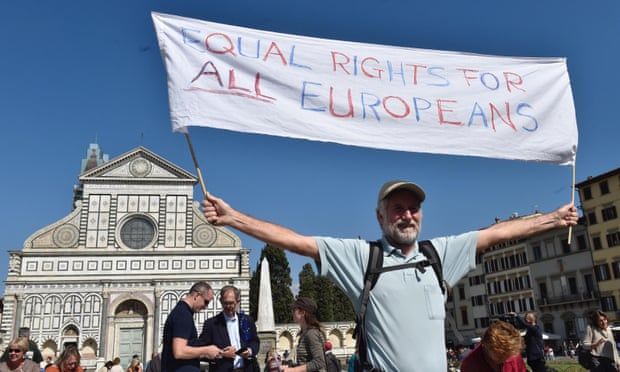 Blow to UK nationals as advocate general finds against Alice Bouilliez, who objected to losing voting rights
The European court of justice has been advised that British nationals living on the continent do not keep the advantages of EU citizenship now the UK has left the bloc, in a blow to campaigners fighting to keep more of their rights after Brexit.

Anthony Collins, an Irish advocate general at the court, said in an opinion published on Thursday that British nationals “who enjoyed the benefits of union citizenship do not retain those advantages following the UK’s withdrawal from the EU”.

The Luxembourg-based court is expected to issue a formal ruling on the case in June, which was brought on behalf of a retired civil servant, Alice Bouilliez, who has lived in south-west France for 37 years. It usually follows its advocates’ advice.

“Of course it’s disappointing,” Bouilliez, 62, a former Foreign Office official, said. “There is still a chance that this advice will be modified or even reversed, but it is upsetting. The opinion does seem quite cut and dried.”

Bouilliez had based her case on the loss of her voting rights in local and European elections, arguing that EU citizenship was a fundamental status that should not be withdrawn without consent when there were serious consequences for people’s rights.

Under the terms of the Brexit withdrawal agreement, the estimated 1.3 million UK citizens legally resident in one of the EU’s 27 states at the end of the transition period are eligible for permanent residence, protecting their most basic rights.

But the withdrawal agreement did not secure several rights that British nationals enjoyed as EU citizens, including the right to vote and stand in local and European elections and the right to live and work outside their EU country of residence.

Julien Fouchet, a French lawyer representing Bouilliez, said he was “very disappointed” with the announcement but emphasised that in 25% of cases the court did not follow the preliminary opinions of its advocate general.

“Our arguments were not heard,” Fouchet said. “The advocate considers nationality is the essential criterion, that residence does not count. He seems to think UK citizens can easily apply for dual nationality, but that is very far from always being the case.”

He said the opinion was “over-simplified” and “a big step backwards for the European Union. I consider EU citizenship to be one of the most significant achievements of the union. Its loss entails considerable consequences.”

Fouchet said he had hoped voting rights would have been retained, pointing out that Bouilliez, who he said could not apply for French citizenship because of her oath of allegiance to the Queen as a Foreign Office employee, was not able to vote in the Brexit referendum because she been out of the UK for more than 15 years.

Collins argued in his opinion that EU citizenship was additional to, and did not replace, nationality conferred by member states, that British nationals ceased to be EU citizens after Brexit, and that the loss of citizenship rights was “one of the consequences of the sovereign decision of the UK to withdraw from the EU”.
Add Comment