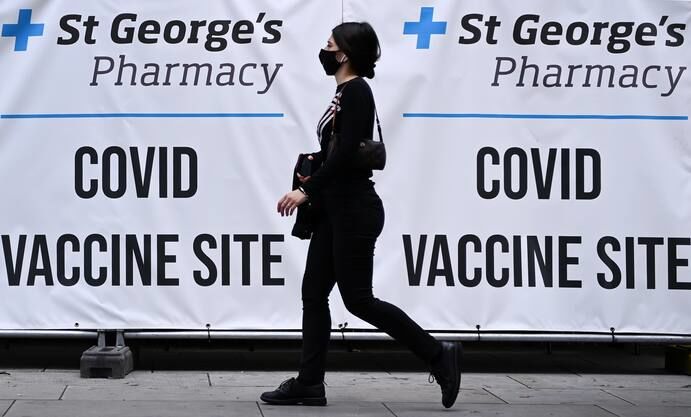 The U.K. Obstetric Surveillance System found that the proportion of pregnant people hospitalized with moderate to severe illnesses has increased with the highly contagious delta variant.
Britain’s chief midwife association is renewing calls for pregnant people to get the coronavirus vaccine amid worries over rising risks from the delta variant.

The appeal followed recent data by Britain’s Obstetric Surveillance System that the proportion of pregnant patients hospitalized with moderate to severe illnesses has increased with the highly contagious delta variant.

The World Health Organization has previously warned that pregnant people are at a higher risk of severe cases of covid-19, the disease caused by the virus, compared to others in their age group. But the U.K.'s latest data provides some of the first figures into the affect of the delta variant on pregnancies.

Numbers from the Obstetric Surveillance System released last week showed that 171 women had been hospitalized with covid-19 symptoms, none of whom were fully vaccinated. Three of the patients had just one dose of a two-shot coronavirus vaccine, while the rest were not inoculated.

Other studies have shown the virus can be contracted by the fully vaccinated, but hospitalizations in those cases are rare.

“It’s so important for pregnant women to get their jab, particularly with the virus being so prevalent and the delta variant proving itself to be so much more transmissible,” said Gill Walton, chief executive of the Royal College of Midwives, in a statement Friday shared by the National Health Service. “Hundreds of thousands of pregnant women worldwide have been vaccinated, safely and effectively protecting themselves against covid and dramatically reducing their risk of serious illness or harm to their baby.”

Britain began administering the vaccine to pregnant people in April. On Friday, Jacqueline Dunkley-Bent, the chief midwifery officer for England, issued a letter to midwives and general practice doctors and asked them to encourage vaccinations due to the delta variant.

When vaccines first rolled out, doctors in Britain, the United Kingdom, the United States and other countries recommended that pregnant people not receive the vaccine as this demographic had been excluded from the initial studies. However, after further review, health-care providers began to add pregnant people to the list of those approved to be vaccinated, particularly after more-contagious variants began to circulate.

Currently anyone above the age of 18 is eligible for a vaccine in the United Kingdom, where about 65 percent of the population has been vaccinated.

One barrier to increasing vaccination rates has been misinformation that coronavirus vaccines can cause infertility. The vaccines using mRNA technologies, the Pfizer and Moderna versions, and those that rely on technologies similar to the flu vaccines, such as the Johnson & Johnson and AstraZeneca shots, do not interfere with a woman’s fertility, scientists say.

Some women, transmen and post-menstrual women have anecdotally reported short-term changes in their menstruation cycles following vaccination, such as heavier bleeding or a period restarting after having stopped. Scientists have said there is no known evidence directly linking the two, as various factors could simultaneously be at play.

According to Obstetric Surveillance System data, since May, 1 in 3 hospitalized pregnant women with covid-19 in England needed respiratory support, more than a third developed pneumonia and 1 in 7 required intensive care.

“Every day our members are seeing very sick pregnant women with covid-19 in hospital and the majority are unvaccinated,” Edward Morris, president of the Royal College of Obstetricians and Gynecologists, said in a statement. “We want to reassure pregnant women that covid-19 vaccines are the safest and best way to protect you and your baby from severe illness and premature birth.”
#COVID-19  #vaccine  #Pfizer  #AstraZeneca  #Covid  #Coronavirus  #Vaccines  #Johnson
Add Comment