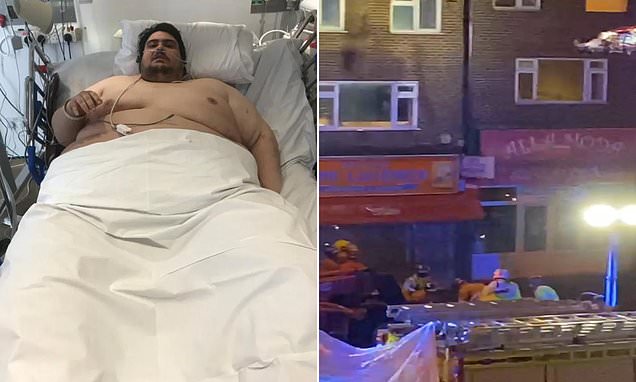 The mother and full-time carer of Britain's 50-stone fattest man today spoke of her hopes he will 'switch to salads' after he was hoisted out of their third-floor flat by a crane after developing a £10,000-a-year takeaway habit.

Jason Holton, 30, from Camberley, Surrey, has been housebound for five years and spends £30 a day on JustEat takeaways including doner meat, chips and chicken chow mein washed down with 1.5 litres of orange juice and five cans of diet coke.

His 52-year-old mother, Leisa, watched on as her son was evacuated by 30 fireman in a seven-hour operation, which involved structural engineers reinforcing the floor of their two-bed maisonette in case he fell.

She told MailOnline today: 'He always had a bit of an obesity problem. From when he was a child he was ok and not too bad. Most of it was five years ago when he piled on more weight after developing some mental health problems.

'He's been housebound and unable to get out of the house. I'm hoping he'll change things and just keep to salads and not go for takeaway foods. He's already spoken about that. I hope this might wake him up.'

Mr Holton's health problems mean he is unable to work, leaving him on benefits including £197.60 a week Employment Support Allowance and a £112.80 Personal Independence Payment. His mother also gets £200 a month to help with council tax.

Leisa was told her son could die of a heart attack in five years if he does not take serious action to curb his 10,000-calorie daily diet.

The worried mother insisted she has tried to stop him ordering takeaways with his debit card but believes he has an 'addiction' to fast food.

She added: 'Seeing him being lifted out of the flat was very worrying because they said he could actually stop breathing in the move. So I was just glad he was alright.'

'He's still in hospital at the moment, where he's been for nearly two weeks, although he hasn't had an operation yet.

'I haven't been able to visit because of the coronavirus. It's bad and really hard when you are worried about a member of your family but can't go and see them.'

Mr Holton has described how his ballooning weight and various mental and physical health problems had left him depressed. He spent weeks 'waiting for my heart to give up' before eventually calling the emergency services.

Mr Holton - who previously lost several stone at a New Jersey fat camp, is being treated for Lymphoedema, a chronic condition caused swelling in his groin and legs.

It is not known what NHS treatment Mr Holton could receive, but a complex Lymphoedema operation with follow up treatment can cost £4300 a year, according to the British Lymphology Society.

Speaking from his hospital bed, he told The Sun: 'It was amazing because it was the first time in six years I'd experienced fresh air.

'I was given codeine to take away the pain from the crane straps, but all I remember is the breath of fresh air and the breeze rushing over my body.'

The operation, on October 11, was witnessed by a man who was walking by on his way from the pub and recorded what happened.

He told MailOnline: 'At first I thought it was a training operation or something, I didn't realise they were actually moving a person until later.

'All the firefighters set up their equipment before smashing the window and winching him down.'

Mr Holton said he once asked the NHS for gastric band surgery but was turned down. Instead his mother was told to rip up the debit card he uses to buy takeaways.

He became the UK's fattest man after 65st Carl Thompson died in 2015.

The 33-year-old, from Dover, had been housebound for more than a year after doctors warned he needed to lose 70 per cent of his body-weight to survive.

When his mother died of a brain tumour in 2012, Mr Thompson turned to junk food as a means of coping with his grief – despite already being obese.

His weight went from 30 stone to 65 in three years, leaving him unable to care for himself.

Consuming a staggering 10,000 calories every day – four times the usual daily amount for a man – Mr Thompson binged on Chinese takeaways and pizzas he had delivered to his door and claimed to have spent £10 a day on chocolate

Unable to walk or even dress himself, he was bathed and cooked for by a team of NHS carers. 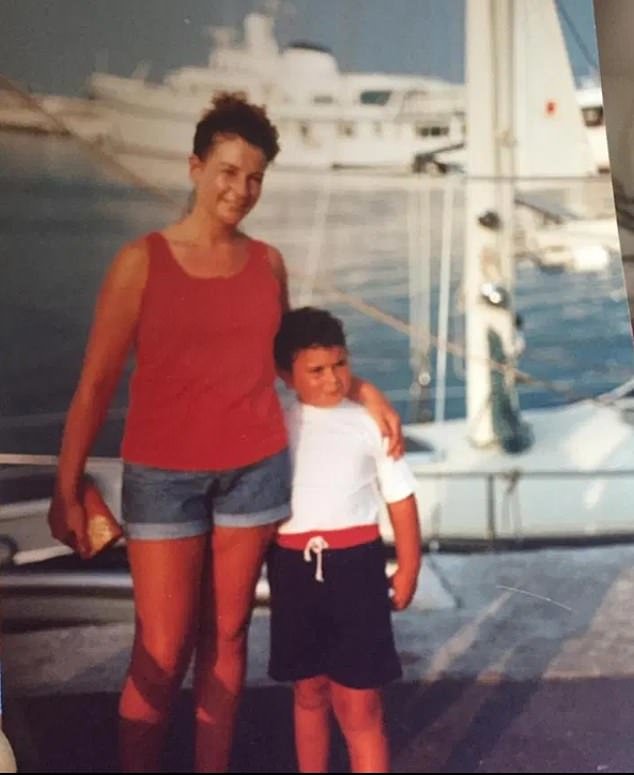 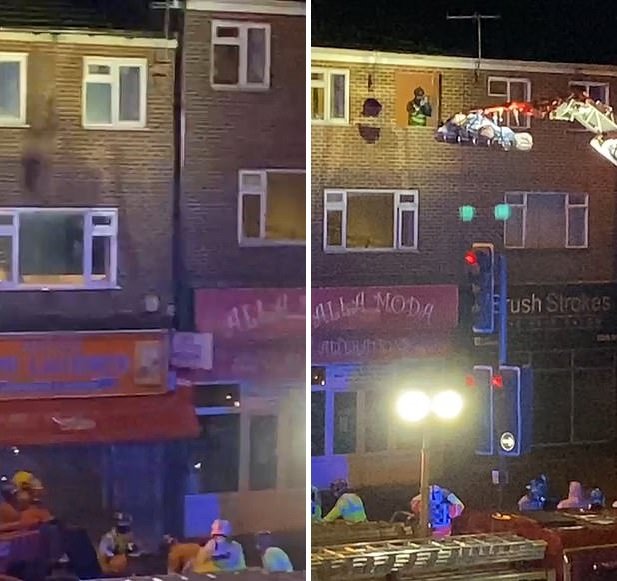 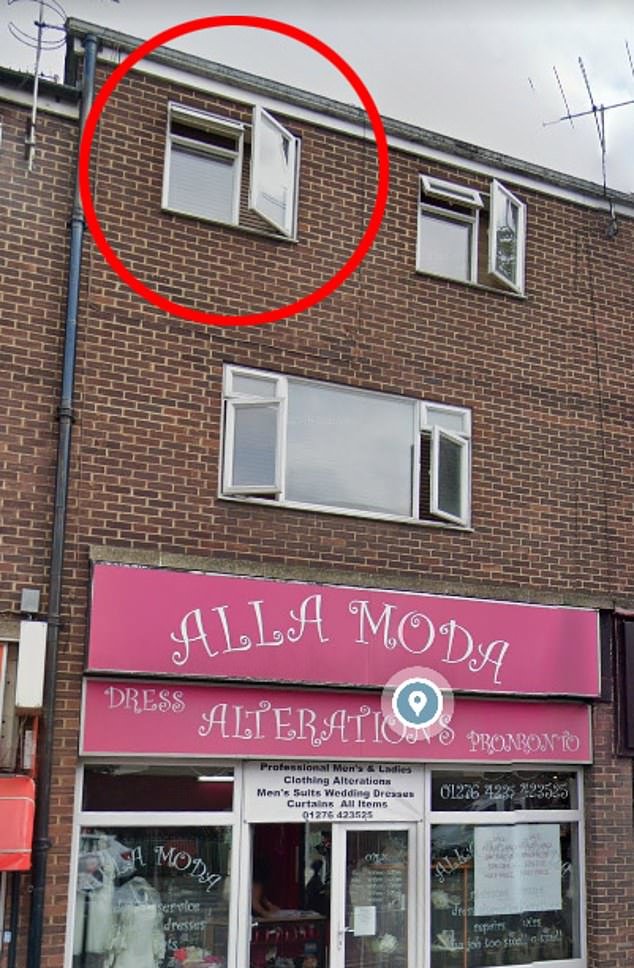 Mr Holton was lifted out of his two-bed maisonette in a seven-hour operation that involved structural engineers propping up the floor in case he fell. The window he was removed from is circled in red 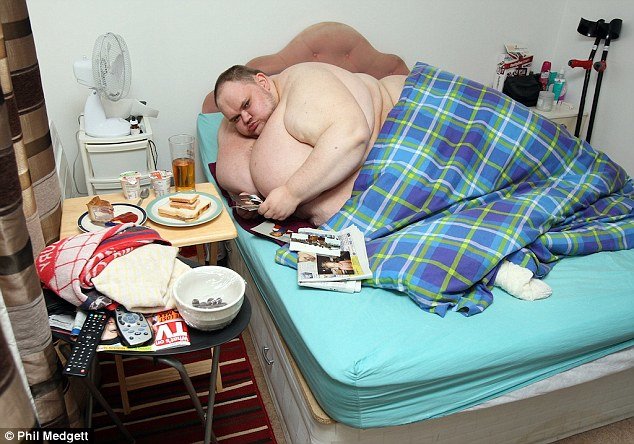 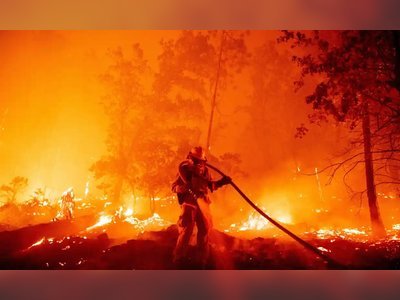 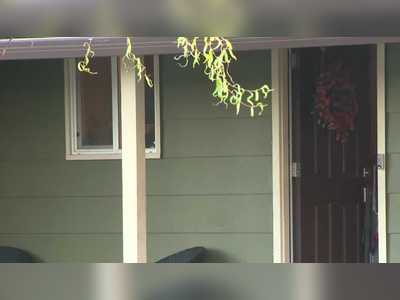 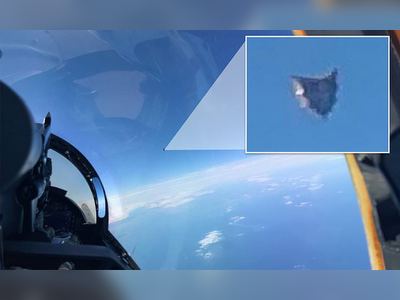 The two classified intelligence 'position reports', issued in 2018 and the summer of this year, circulated widely in the U.S. intelligence community, including the CIA, NSA, and... 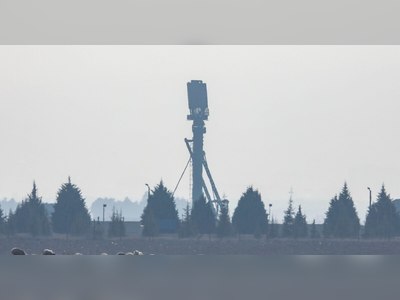 The NDAA would mandates sanctions on Turkey for its acquisition of the S-400 air missile defense system. 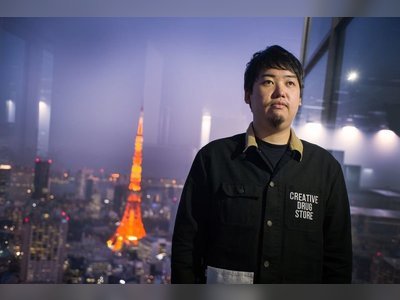 Everything changed for Yuta Tsuruoka when his mother, who runs a small shop in rural Japan, made a passing comment: She wanted to set up her own online store but didn’t know how.