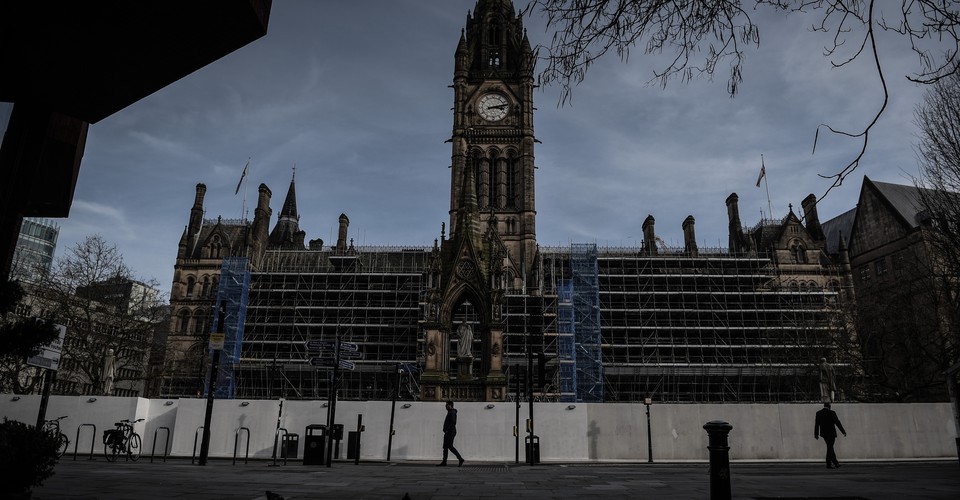 The country has gone into lockdown once more. The current set of restrictions has more troubling reasons than the last.
After Britain first went into lockdown to arrest the spread of the coronavirus last year, one had to contend with a number of mitigating factors when assessing the government’s performance. Yes, the country then suffered the worst death toll in Europe, and the worst economic slump, but Boris Johnson had “followed the science,” delaying a lockdown on the advice of his government’s medical and scientific advisers.

More generally, Britain—like everywhere else in the world at the time—was feeling its way in the dark. It may have stumbled more than most, costing many thousands of lives, but by the summer it appeared to have regained a modicum of composure, falling in line with most other European countries.

Yet today, once again, Britain is failing. Addressing the nation last night, Johnson warned that COVID-19 was running rampant throughout the country, with hospitals at risk of being overwhelmed, as he imposed a third national lockdown in nine months after weeks of pressure to strengthen the government’s response. Last summer, I sought to understand why Britain had done so badly—there was little doubt it had failed; the only question was why. Now the question has boomeranged back.

For Johnson and his government, the answer, like most sequels, is worse. From the beginning of the outbreak last spring, they understood the threat of a second wave in the winter. But while Johnson assiduously “followed the science” then, this time he has fallen out of line with his scientific and medical advisers, who have been pushing him to move harder for weeks, if not months.

This time, Johnson cannot claim ignorance. “This is not a failure of science advice,” Mark Walport, Britain’s former chief scientific adviser, told me. “The policy makers had their attention drawn to what was coming.” Ian Boyd, a member of the government’s main pandemic advisory committee, told me: “Since April, the big thing on everybody’s mind was winter. We all knew it would be a challenge. There was a sense of inevitability about it.”

As early as March 3, in fact, when the British government published its first pandemic strategy, Johnson’s experts were warning in briefings to journalists about the dangers of a winter surge, and that such a scenario should be avoided. In July, Britain’s Academy of Medical Sciences published a report noting that the threat of a winter crisis could be greater than in the spring.

That same month, the government’s chief medical officer, Chris Whitty, told Parliament’s health committee that a winter surge was “a really serious concern looking forward [and] where I spend most of my thinking time.” In late September, his colleague Patrick Vallance, the chief scientific adviser, warned that Britain could face 50,000 cases a day by mid-October, with more than 200 daily deaths a month or so later. While the country took a little while longer to get to these grim milestones, they have now been comfortably passed.

Johnson’s alibi now is that he did learn the lessons of the first wave—he just got unlucky. His argument, articulated in the evening broadcast announcing the lockdown, is that a new and far more contagious variant of the disease emerged in England this fall, destroying the government’s successful suppression of the virus. The government’s strategy, he said, would have worked if it weren’t for the new strain.

And this is, at least to some degree, true. Evidence suggests that the new strain is more contagious and could well be partly responsible for the rapid surge in cases across Britain. As one expert noted to me, it has been a bit like someone who was managing just fine with mortgage payments while interest rates were at 4 percent suddenly, and without warning, having to make payments when the interest rate rises to 6 percent, a 50 percent increase.

Yet isn’t the point that homeowners—let alone governments—must plan for these scenarios? Governments cannot blame the failure of their policies on viruses not behaving as expected, just as homeowners cannot complain to the bank if they can’t afford their mortgage.

In any case, the higher the prevalence of the virus, the more likely it is that significant mutations will occur. By not suppressing COVID-19 more effectively, Britain was increasing the chance of a mutation doing exactly what it did. It is not even the only variant in Britain—another has been imported from South Africa, seeping through the country’s porous borders with apparent ease.

The reality is that Johnson has learned only some of the lessons from his failures in the first wave. He has proved consistently slower to take action to suppress the virus than other leaders—even compared with those in the U.K. itself. In fact, Johnson’s reluctance to act and his optimism that he won’t have to in the future have become a pattern.

As far back as March, he was predicting that the country could “turn the tide” of the pandemic after 12 weeks and “send coronavirus packing.” In July, he claimed that Britain would not need another national lockdown.

Even when he was forced to impose fresh restrictions in October, he moved slower than leaders in Wales and Scotland and slower than the opposition demanded, appearing to resist further restrictions until given no choice. As recently as Sunday, he said there was no doubt in his mind that schools were safe—only to announce their closure a day later.

In the end, both Walport and Boyd described Johnson as trying to steer a middle course, managing the pandemic without destroying ordinary life and the economy. This was entirely reasonable, both acknowledged. Yet, as Walport noted, “The resulting compromises may have not succeeded in preventing severe damage either from the disease or from its social and economic consequences.”

In other words, Johnson—famous for his stated desire to have his cake and eat it, too—tried to have it both ways, but got neither. He has now bet the house on vaccines to save the day. Yet even if they do, and he will deserve some credit for backing the vaccine effort early with serious government money, it will not erase the failures of Britain’s pandemic response.
#COVID-19  #vaccine  #Covid  #Coronavirus  #Boris Johnson  #Vaccines
Add Comment