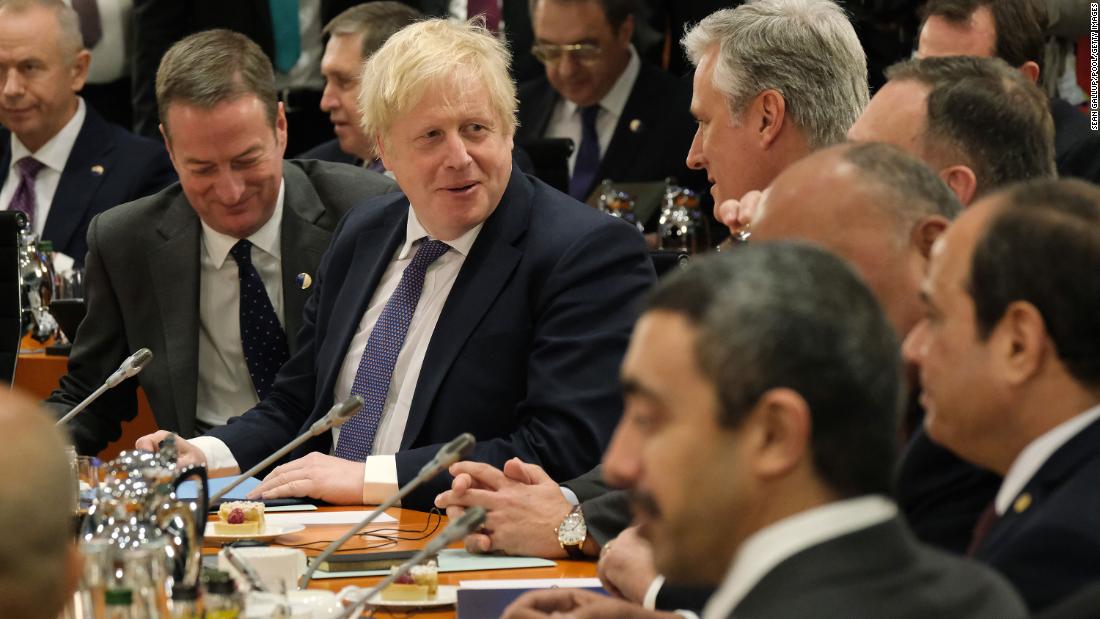 This week, Boris Johnson gets his first big chance to answer a question that's puzzled many in the international community for some time: Post-Brexit, what is Britain actually for?

Critics of the United Kingdom's decision to leave the European Union have long worried that, overseas, Brexit was viewed as an inward-looking project carried out by a nation hostile to the outside world.

Policies enacted by Johnson's government since have done little to assuage these fears: Cultural battles over British heritage; disputes with the European Union over the trade deal signed by the Prime Minister himself last year; slashing spending on foreign aid, to name a few.

Now, Johnson has a truly golden opportunity to write chapter one in the story of post-Brexit Britain's return to the international community as a champion of the liberal democratic world and protector of Western values.

The G7 summit, taking place from Friday on the coast of Cornwall in southwest England, is the first major in-person meeting of the leaders of the world's biggest economies since the start of the Covid-19 pandemic. It is also the first foreign trip of Joe Biden's presidency.

British government officials couldn't be happier that such a high profile event is being held on their soil at the precise moment that global leadership is needed to steer the recovery from the worst international crisis since the Second World War.

The central message of Johnson's policy priorities couldn't be clearer. "We will use our G7 Presidency to fight and build back better from coronavirus," the UK government says. This means an ambitious, optimistic drive for democratic, wealthy nations to rebuild the global community in a way that doesn't leave poorer nations behind.

Johnson's team doesn't seem to be looking for headline-grabbing policies or vague communiques that won't be delivered on. They truly believe that hosting this summit at a time of real international crisis means there is an opportunity to shift the political consensus on policymaking and for strong, democratic nations to take the lead on addressing the greatest long-term challenges facing the world. Taking this action now, they believe, would mean such nations can rebuild society on their own terms and minimize threats from anti-democratic rivals such as China and Russia.

They will hope to build on the achievements of finance ministers, who, meeting in London ahead of the main summit, agreed on Saturday to back a global minimum tax of at least 15% on multinational companies. The group also agreed that the biggest companies should pay tax where they generate sales, and not just where they have a physical presence.

While Johnson will spend the coming days talking about growing prosperity in all corners of the globe and championing democratic values in quite broad terms, the most thought-through plank of his G7 agenda is on a matter that the Prime Minister says is close to his heart: Tackling climate change.

Conveniently, climate change is an issue that affects virtually every policy priority of every developed nation. It is also one where the UK can credibly take an international lead.

"Boris has correctly identified that climate policy is an easy win because everyone agrees urgent action is needed," said David Liddington, former deputy prime minister of the UK. "But it's also a very smart move for the UK. We have a respectable track record on climate change. A lot of the best scientists and researchers are at our universities so it's also a big opportunity for our domestic economic renewal."

The UK is also hosting the United Nations Climate Change Conference, COP26, in November later this year. "The G7 is the beginning of six months of diplomacy leading to COP," a senior adviser to the Prime Minister told CNN. They explained that Johnson saw this year as a chance to establish "Britain's new place in the world" and put to rest fears that it was a nation in retreat. 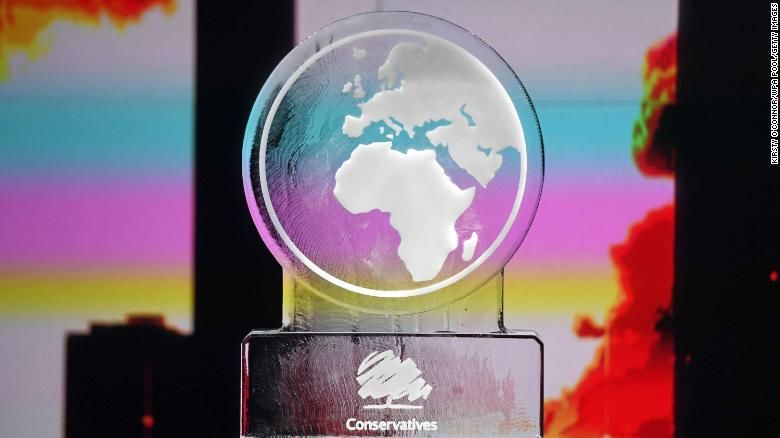 An ice sculpture is put in place for Prime Minister Boris Johnson in the studio before the start of the Channel 4 News' General Election climate debate on November 28, 2019 in London, England.

Putting Johnson's climate agenda in an international context, the adviser said the top priority is to put pressure on wealthy nations to fulfill that UN target of $100 billion a year to tackle climate change, a deadline which was set for 2020 and missed.

Climate change is a huge issue that touches on everything from international security to economic prosperity, so it stands to reason why it would be at the heart of Johnson's G7 agenda.

While the UK has a credible record on climate change, Johnson himself has been criticized for policies and behavior that contradict his rhetoric. He and his government came under fire when it initially stayed out of plans to construct the first deep coal mine in the UK in 30 years, only U-turning and calling for a public inquiry after coming under pressure.

The parliamentary watchdog They Work For You says that as a member of parliament, Johnson has "generally voted against measures to prevent climate change" between 2004 and 2020.

Beyond climate, government officials are acutely aware that the past five years of Brexit-driven political chaos might have affected the international view of the UK.

"There is no doubt that Brexit has mystified and at times unsettled the UK's closest international partners -- especially the US, for whom Britain is the most important European security partner and had also been seen as uniquely well equipped to demonstrate the spirit and strength of liberal values," said Leslie Vinjamuri, director of the US and Americas program at Chatham House.

"For so many Americans, London had also been recognized as a global hub, a city with the perfect time zone and location, where people would stop as they passed from America to the Middle East to Asia. To see the capital of this country become suddenly so fixated on seemingly parochial problems was jarring," Vinjamuri added. 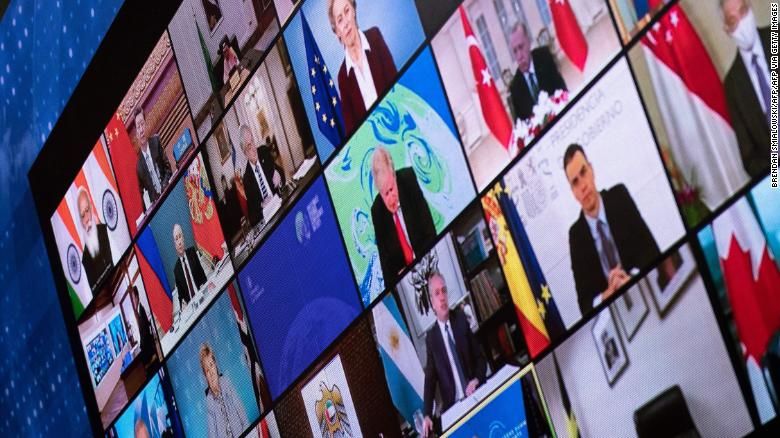 World leaders are seen on a screen during a climate change virtual summit from the East Room of the White House campus April 22, 2021, in Washington, DC

But Johnson's team is confident that the G7 and COP will remind the world that the UK has always been a reliable partner and is a trustworthy protector of the international system. And as Vinjamuri said, "reputations can be overcome, as people have short memories. And it's very significant that Johnson is getting out ahead on climate and defense."

"Everyone has a common enemy in the virus, which has put in the shade smaller disagreements. There are now even more concerns about China that simply didn't exist 18 months ago, and the big EU countries are not as reliable on China as the UK in the eyes of countries outside of Europe."

Beyond politics, Johnson is a man who likes to put on a show for the cameras. Hosting the first major diplomatic event in over a year and welcoming the new US President is firmly in his comfort zone.

"This G7 really does provide him with a huge stage to not only throw a great performance for the world's media, but also bolster his credentials that he is a true leader who can broker agreements between the most powerful people on earth," said Anand Menon, professor of international politics at King's College London.

As things stand, the conditions really suit Johnson, and his team is confident that hosting the G7 is going to be a PR triumph for Global Britain.

On paper, they are probably right to be confident, though Johnson is a particularly gaffe-prone politician and has been caught out on numerous occasions for saying wildly inappropriate things. Top examples include the time he said the war-torn Libyan city of Sirte could be the "next Dubai" once they've "cleared the bodies away" at a conference and when he accidentally and mistakenly implied a British citizen arrested in Iran had been teaching journalists, a claim which may have been responsible for her prison sentence being extended. Johnson was the UK Foreign Secretary at the time of both incidents. 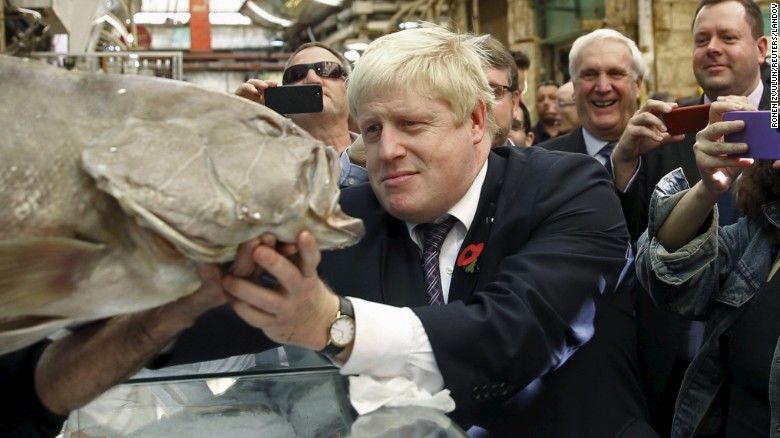 Boris Johnson looks at a fish while touring the Mahane Yehuda market in Jerusalem November 10, 2015.

There are also the expected G7 protests, for which Johnson's detractors have plenty of ammunition. The Prime Minister is engulfed in numerous sleaze scandals and was only last week accused by his former chief adviser of pursuing policies that resulted in tens of thousands of deaths during the pandemic.

Johnson is under pressure from lockdown skeptics, some of whom are in his own Conservative party, to end all Covid-19 restrictions on June 21, the date set by the government as the earliest at which all pandemic limitations could be lifted. That date has been thrown into doubt by a rise in cases of a coronavirus variant originally found in India. If there is a spike in cases during the summit, it will be embarrassing on two fronts: The fact it happened at all and the inevitable political backlash from multiple sides.

But Johnson now has a rare opportunity to hit something of a reset button on Britain's reputation overseas on the grandest stage of all. His run of political good luck of late is leaving his inner circle confident that it will be a storming success.

That success could be fleeting, however. These sorts of events do have a tendency to get a lot of coverage then be quickly brushed aside. No formal policy is made at the G7 and by the UK's own admission, its ambitions are fairly limited.

This could mean that for all the bluster of Britain returning to the world stage, Johnson might find that he's spent a load of political capital on a summit that gets overrun by events out of his control and ultimately forgotten almost as soon as it's over. If that happens, it would be an anti-climax after all the planning that's gone into his glamorous summit at the seaside.