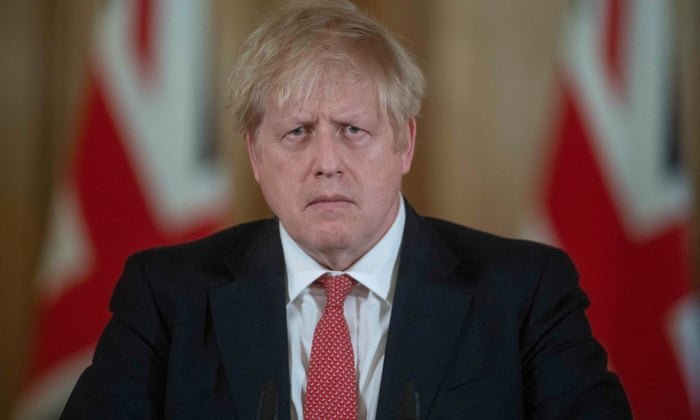 Boris Johnson to warn UK: tougher lockdown may be necessary

Outbreak will get worse before it gets better, PM tells nation as death toll hits 1,000
Boris Johnson will warn every household in Britain that the coronavirus outbreak is likely to worsen and that he is prepared to tighten the nation’s lockdown, after the UK suffered the biggest daily increase in its death toll.

The country’s 30 million households will receive a letter from the prime minister cautioning them that the worst is still ahead, along with details of the government’s orders on social distancing, symptoms and handwashing, as ministers battle to prepare the NHS for the coming surge in cases.

“From the start, we have sought to put in the right measures at the right time,” Johnson says in the letter, which will land on doorsteps this week. “We will not hesitate to go further if that is what the scientific and medical advice tells us we must do.

“It’s important for me to level with you – we know things will get worse before they get better. But we are making the right preparations, and the more we all follow the rules, the fewer lives will be lost and the sooner life can return to normal … That is why, at this moment of national emergency, I urge you, please, to stay at home, protect the NHS and save lives.”

The stark warning came as health chiefs reiterated that Britain will do well to keep deaths below 20,000 and warned against complacency. It follows new research from Imperial College London, which suggested Britain could suffer 5,700 deaths – far lower than previous estimates – should it follow the same path as China.

“Now is not the time to be complacent,” warned Stephen Powis, national medical director of NHS England.

“If we do reduce the deaths to a level which is below what we initially thought, I want to be absolutely clear, that won’t be because we are somehow lucky. It will be because every citizen of this country, the British public, has complied with the instructions that the government has given based on the best scientific evidence.”

With the number of coronavirus cases around the world passing 600,000, it emerged that:

Police signalled they would take robust action against acts of deliberate coughing over elderly or vulnerable people, as officers said they had been made aware of several such allegations.

Spain recorded another record daily death toll of 832, though health officials said that the outbreak may be peaking in some parts of the country. Deaths in Italy rose by 889 to 10,023 people.

President Trump said he was considering a two-week quarantine for New York, New Jersey and parts of Connecticut as the number of Covid-19 cases in those states continued to climb.

Meanwhile the business secretary, Alok Sharma, insisted there were “no gaps in government” despite the prime minister being among several senior figures to have entered self-isolation.

Officials said that Boris Johnson still had only mild symptoms, after revealing on Friday that he had contracted the virus.

He was working from 11 Downing Street on Saturday and will today chair a meeting of the Covid-19 war cabinet. Alister Jack, the Scottish secretary, is the latest cabinet minister to be self-isolating after he developed mild symptoms.

A poll for the Observer shows the majority of the British public want even stricter measures put in place to combat the spread of the virus and believe that the government was too slow in responding to the pandemic.

The latest Opinium poll suggested 57% of the public think the lockdown measures should go even further, while a third (33%) think there should be a ban placed on all public transport. A majority (56%) also think the government did not act fast enough. However, the vast majority of voters (92%) back the current lockdown measures and approval for the government’s handling of the crisis is also growing.

Ministers remain under pressure over the preparedness of the NHS. It has prioritised the testing and approval of new protective equipment amid continued complaints from NHS and care workers that they do not have access to the right protection. Coronavirus tests are also now being rolled out for NHS staff, with more test centres set to be opened in the next few days.

Concerns remain over the number of ventilators and the speed at which more can be purchased. There are currently 8,000 available and another 8,000 said to be arriving in the next few weeks. Stefan Dräger, the head of ventilator manufacturer Drägerwerk, told German magazine Der Spiegel that the number of intensive care beds in England per capita was lower than Italy and five times lower than in Germany. “The challenge in England will be greater than in Spain,” he warned.

Downing Street officials have also said they are prepared to use the RAF to repatriate British nationals stuck overseas if commercial flights cannot be found. “Our priority is commercial flights, but we do not rule out exceptional means if necessary,” said one.
Add Comment