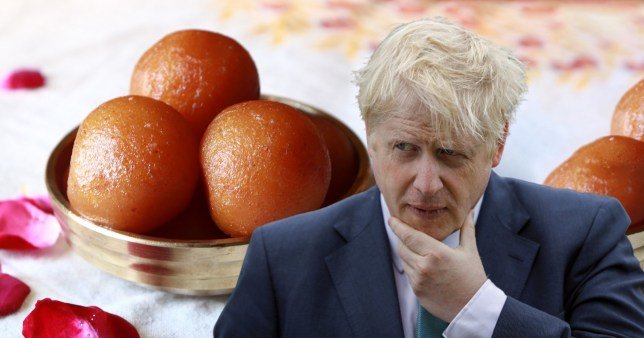 With lockdown restrictions leaving families and friends unable to celebrate Diwali together this year, Boris Johnson brought smiles to people’s faces with a speech marking the festival.

He probably wasn’t aiming for laughs, but his clumsy and weirdly aggressive pronunciation of gulab jaman, a famous South Asian sweet, has been making many people’s day.

He said: ‘I know that celebrating at a distance isn’t easy when you want to get together with all your family or visit your friends or share with them the Diwali fun, as well of course the odd samosa or gulab jaman.’

The PM’s blustering, emphatic pronunciation of gulab jaman did not go unnoticed by some Twitter users, who discovered the video today.

Another user wrote a tongue-in-cheek response, saying: ‘Boris Johnson has Rishi Sunak and Priti Patel by his side 24/7 you’re telling me neither of them could take five seconds to tell him how to pronounce gulab jamun properly.’

Whether the Prime Minister’s forceful pronunciation is because he is unfamiliar with the South Asian delicacy, or because the thought of biting into the delightful ball of fried milk solids bathed in sugar syrup caused a verbal eruption is uncertain.

It isn’t the first unfortunate collision the Conservative party have had with South Asian culture.

Zac Goldsmith raised eyebrows a few years ago during the London mayoral elections when he claimed to be a fan of Bollywood but couldn’t name a single actor or film.

‘I’m a Bollywood fan, so anything with a Bollywood theme, I will lap it up,’ the former mayoral candidate gushed at a film premier.

When asked by a journalist to name his favourite film or his favourite actor, Mr Goldsmith staggered for an answer before saying, ‘No I’m not going to give you one.’


Diwali is celebrated around the world by Hindus, Sikhs and Jains and Buddhists.

The festival of light, which celebrates the triumph of light over darkness and good over evil, lasts for four days. The main day – Diwali day – is on November 14.

This year’s Diwali is unlike any other as parts of the UK are under a second national lockdown to prevent further coronavirus infections.

Johnson went on to thank the community for the ‘amazing part you are playing in our battle against Covid-19’.

He added: ‘Just as Lord Rama and his wife Sita found their way home after defeating demon king Ravana, their way lit by many millions of lamps, so too we shall find our way and we shall do triumphantly.’