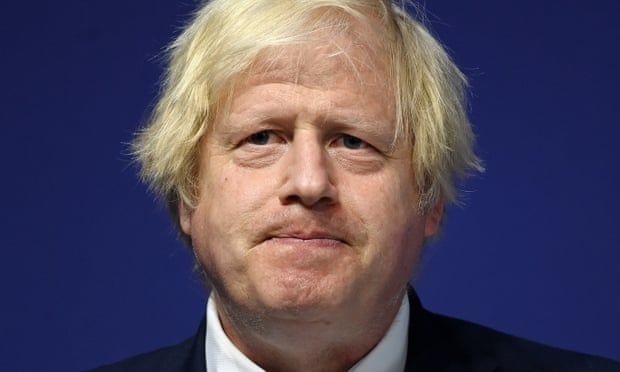 Bad news for the Tories does not necessarily lead to good news for Labour: backing for Keir Starmer is also down

Boris Johnson’s personal approval rating has slipped to its lowest level since he became prime minister, according to the latest Opinium poll for the Observer.

His overall approval rating has fallen to -16, down from the -13 he recorded two weeks ago and -8 a fortnight before that. It is even lower than the -15 he recorded back in January, when Britain was in the grip of a Covid peak, lockdown measures were in place and the NHS was under severe pressure.

The latest poll shows that 34% of voters now approve of the job he is doing as prime minister, while 49% disapprove – up two points on the previous poll. When rounding was taken into account, the overall approval rating amounted to -16.

However, the poll suggests that bad news for Johnson does not necessarily lead to good news for Labour. Keir Starmer’s approval rating is also down, with a net score of -11. It fell from -6 two weeks ago. 28% approve of the job he is doing, while 39% disapprove. It is his worst score since Opinium started tracking him in this way. 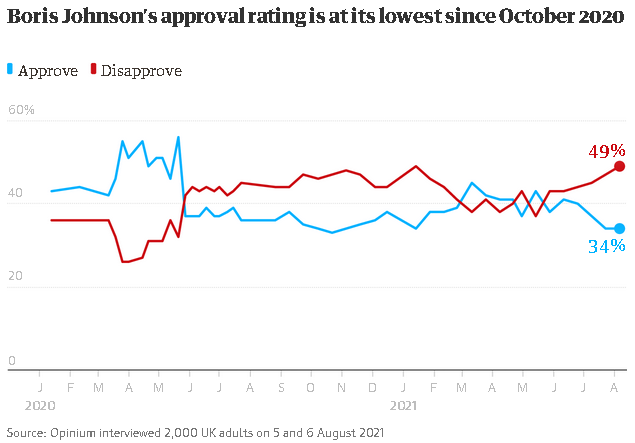 Johnson remains ahead when voters are asked whom they regard as making the best prime minister, with 31% backing Johnson (up a point from the last poll) and 25% opting for Starmer (-1). However, both were behind “neither”, which was selected by 32% of respondents.

Overall, the Tories now lead by seven points, meaning their lead is largely unchanged from the eight-point lead a fortnight ago. The Conservatives are now on 42%, with Labour on 35%, the Lib Dems on 7% and the Greens on 5%. 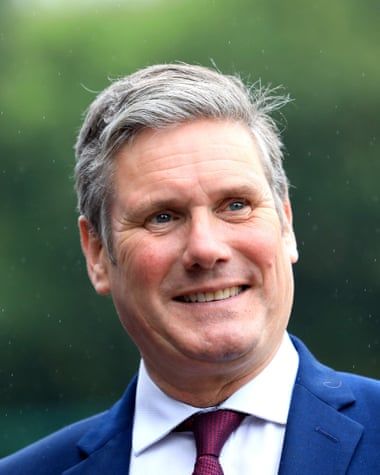 25% of those polled back Keir Starmer for prime minister but both he and Johnson were behind ‘neither’.

The poll also exposed public confusion over the government’s vow to “level up” the country. Less than a fifth (18%) of the public have a clear idea of what the term meant, with a further 30% saying they had a vague idea. Three in ten (30%) had not heard the term before.

Adam Drummond, head of political polling at Opinium, said: “It’s only after rounding, but our latest poll shows Boris Johnson with his lowest approval rating of any of the 53 times we have asked the question since he became prime minister. While the so-called “vaccine bounce” he has been enjoying in recent months may be over, the Conservatives still enjoy a comfortable seven-point lead in the polls – partly off the back of Starmer’s similarly poor ratings.

“But even as his ratings do drop, the prime minister should never be written off. He has bounced back from poor polling numbers before, and he may be able to do so again.”