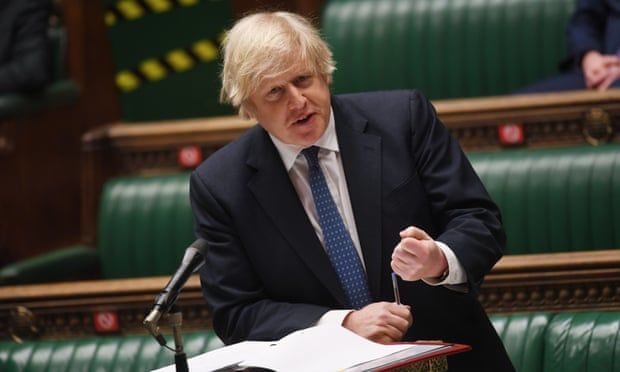 Boris Johnson has resisted calls from Labour to apologise and correct what the party said was a false claim about opposition MPs voting against a pay rise for nurses.

The prime minister’s press secretary, Allegra Stratton, insisted he said nothing wrong, after the Commons Speaker, Sir Lindsay Hoyle, piled pressure on by saying that not admitting mistakes was “dishonourable”.

The row began when Johnson was challenged by the Labour leader, Sir Keir Starmer, over the government recommending a 1% pay rise for some NHS staff, despite their hard work during the coronavirus pandemic.

Holding up a copy of the NHS long-term plan published in June 2019, Starmer said: “Two years ago, he made a promise to the NHS in black and white: his document commits to a minimum pay rise of 2.1%.”

Johnson retorted that Starmer “voted against the document in question”, prompting outrage from Labour MPs and a complaint from the shadow health secretary, Jonathan Ashworth – because no one voted against the NHS Funding Act, which brought the 2.1% pay rise into effect.

At the time, Hoyle said that by making his intervention, Ashworth had achieved his aim of putting a clarification on the record.

However, amid rising anger from opposition MPs, Hoyle issued a new statement saying the onus was on MPs to “correct the record if they make an inaccurate statement to the house”.

He cited the ministerial code, which says MPs should “correct any inadvertent error at the earliest opportunity”. And in a thinly veiled warning to Johnson, Hoyle said ministers “must take responsibility for correcting the record if a mistake has been made”.

He added: “It is not dishonourable to make a mistake, but to seek to avoid admitting one is a different matter.”

Stratton later said Johnson had nothing to apologise for and would not make new comments on the subject in parliament, because the prime minister had been talking about the Queen’s speech, which sets out the government’s upcoming plans to create new laws.

There was no mention of the speech during Johnson and Starmer’s exchange, but Stratton said the “document in question” that the prime minister referred to was the Queen’s speech.

She denied the government was trying to retroactively find an explanation for Johnson’s comments, telling reporters at the daily lobby briefing of journalists: “It’s not hindsight, it’s explaining what was said yesterday. We’ve gone over this to establish the grounds upon which he made a point.”

On Wednesday, Stratton made no mention of the Queen’s speech in her explanation of Johnson’s comments, but on Thursday explained that was because “I hadn’t had a chance to speak to the PM … I hadn’t been able to get to the bottom of the particular point he’d been making”.

Asked if Johnson felt he needed to make the explanation himself in parliament, she said: “No, he does not.”

Starmer, when asked about the matter at Labour’s local election campaign launch, said Johnson should apologise and correct the record. “I’m afraid we have a prime minister who has never taken responsibility for anything in his life, and he should start now,” he said.

Jacob Rees-Mogg, leader of the Commons, explained the meaning behind Johnson’s comments in a short statement on Thursday, but Labour pushed for the prime minister to do so himself.

In his second letter to Johnson on the subject, Ashworth said: “I believe it is in the public interest that you clarify the situation yourself through a statement to parliament to abide by the [ministerial] code.”