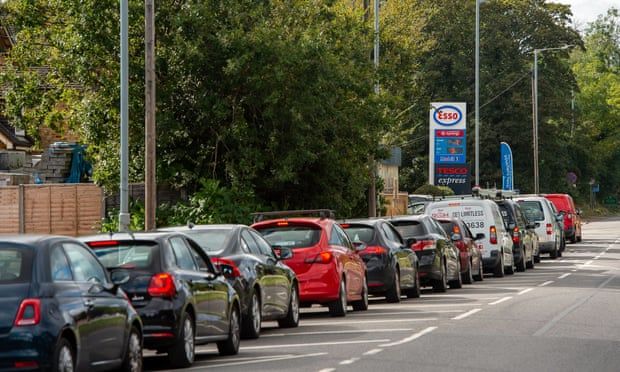 Keir Starmer and industry leaders call on PM to do more as ministers decide against immediate deployment of troops
Boris Johnson has ordered the army to remain on standby to help fuel reach petrol stations hit by panic buying, as Keir Starmer and businesses called on him to get a grip on the shortages rippling across the economy.

No 10 said army drivers would be ready to help deliver petrol and diesel on a short-term basis, but stopped short of an immediate deployment, even though some essential workers have not been able to carry out their jobs without fuel.

The decision was taken at a meeting of cabinet ministers on Monday, as the industry said consumer panic – rather than real shortages – was the main driver of the problems, and predicted that it would ease within days.

People continued to queue at fuel stations in spite of government warnings that drivers trying to top up were making the situation worse.

Kwasi Kwarteng, the business secretary, said it was right for the government to take “sensible, precautionary steps”.

“The UK continues to have strong supplies of fuel. However, we are aware of supply chain issues at fuel station forecourts and are taking steps to ease these as a matter of priority,” he said. “If required, the deployment of military personnel will provide the supply chain with additional capacity as a temporary measure to help ease pressures caused by spikes in localised demand for fuel.”

The government also authorised an extension to licences for fuel tankers, automatically renewing them without refresher training.

A joint statement from the fuel industry, released by the government, said companies expect the situation to ease in the coming days because many cars are now holding more fuel than usual.

The companies, including BP, Shell and Esso, said there was “plenty of fuel at UK refineries and terminals, and as an industry we are working closely with the government to help ensure fuel is available to be delivered to stations across the country”.

No 10 and ministers did discuss a plan for more immediate deployment of military drivers, but decided to hold off for now. The Ministry of Defence was sent a military aid to civil authority request to ensure that about 100 troops would be ready for action.

The Labour leader accused Johnson of having allowed the situation to “spiral out of control, despite months of warnings from industry”.

“The consequences of Boris Johnson’s failure to prepare or plan are being felt across our country,” Starmer said. “The government must now bring together businesses and trade unions to develop a proper plan, both for the immediate crisis, as well as to tackle the long-term issues that have led us here.”

Ed Davey, the Liberal Democrat leader, said the government should already have had troops on standby, as he did as energy secretary when the threat of a fuel shortage loomed in 2012.

“Someone in government needs to explain their incompetence and there must be a case for someone to resign – whether it’s transport secretary Grant Shapps, business secretary Kwasi Kwarteng, or someone in the MoD. But this is shockingly bad government,” he added.

The CBI called on the government to do more to anticipate wider problems with shortages that are likely to carry on hitting the economy while labour shortages continue.

Tony Danker, director general of the business body, said: “There are labour shortages across the economy, and of course, the government is right that in the long run, we can’t simply turn to immigration to solve those problems. But in the short run, there is no solution, other than to look that way.”

Pump prices for fuel in the UK have reached their highest level in eight years as petrol stations run dry amid panic buying, with a further jump expected as wholesale energy costs continue to surge. Figures from the RAC showed that the average price of a litre of petrol rose from 135.9p on Friday to 136.6p on Sunday, the highest level since September 2013.

As queues continued to form at forecourts on Monday after a chaotic weekend, the AA warned that prices could rise further this autumn as the global oil price soars to its highest level in three years.

Hoyer, which delivers petrol for BP, said it had 50 vacancies in its fuel fleet of about 1,200 vehicles, and called on motorists to stop panic buying. Meanwhile, surplus goods firm Wholesale Clearance UK said it had sold out of jerry cans over the weekend as motorists stockpiled fuel.
#Boris Johnson  #Johnson
Add Comment