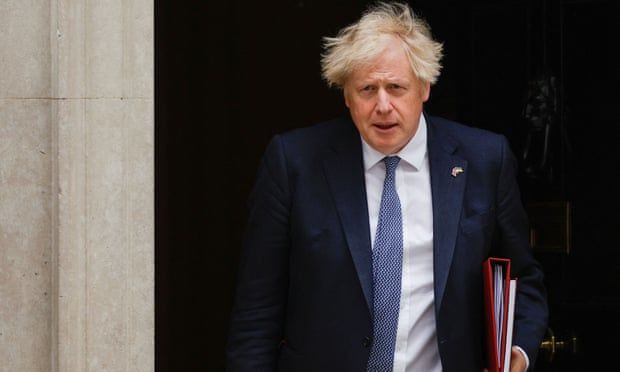 Andrea Leadsom criticises PM’s ‘failure of leadership’ as another MP submits letter to 1922 Committee
Boris Johnson is facing mounting calls for a confidence vote in his leadership that could put his position under threat within days, as two more MPs suggested they had lost faith in the government.

The former cabinet minister Andrea Leadsom criticised Johnson’s “failure of leadership” – the latest in a string of senior Tory figures to express doubts about the prime minister’s future.

The former business secretary, who has twice run for the party leadership, stopped short of calling for Johnson to resign but said individual MPs would decide on how best to restore confidence.

In a letter to her constituents, Leadsom said she believed it was “extremely unlikely that senior leaders were unaware of what was going on”.

“I therefore agree with Sue Gray’s conclusions that there have been significant failures of leadership, both political and official, in No 10 and the Cabinet Office,” she wrote.

The MP for South Northamptonshire added: “Each of my Conservative MP colleagues and I must now decide individually on what is the right course of action that will restore confidence in our government.”

Leadsom’s comments came as John Stevenson, the MP for Carlisle, went further on Tuesday and said he had added his name to those writing to Sir Graham Brady, the chair of the 1922 Committee, to call for a confidence vote.

“The continuing criticism, revelations and questions are debilitating for the government at a time when there are so many other important and critical issues to be addressed,” he said.

“Sadly the prime minister appears to be unwilling to bring matters to a head and submit himself to a vote. Therefore the only option is for Conservative MPs to facilitate a vote of confidence. I have already taken the appropriate action.”

On Monday, the first day of the parliamentary recess, four other MPs called on Johnson to resign or call a vote in himself, including Jeremy Wright, a former attorney general.

Several Tory MPs told the Guardian they believed the threshold of 54 letters withdrawing support for Johnson was close to being crossed – or may have been already. This would trigger a secret ballot on whether they still have confidence in the prime minister.

At least 30 MPs have said the prime minister should resign or call a confidence vote but not all have confirmed they have submitted a letter.

Elliot Colburn, a Tory MP with a small majority against the Lib Dems, said he had put in a letter “some time ago”, while Nickie Aiken, the Cities of London and Westminster MP whose council turned Labour this month, called on Johnson to bring an end to the situation by submitting a no-confidence letter in himself. The Tory MP Andrew Bridgen also told constituents he had resubmitted his letter.

On Tuesday the former Tory leader William Hague said the prime minister was in “real trouble” and he believed a confidence vote in Johnson was imminent.

“A lot of people misread it really, the events of last week, as meaning the trouble is over, Boris is free and that’s actually not the mood in the Conservative party, which is very, very troubled about the contents of that report,” he told Times Radio.

“So I think the Conservative party will need to resolve this one way or another, obviously because to be an effective party they either need to rally behind the prime minister they’ve got, or they need to decide to force him out and I think they’re moving towards either next week or around the end of June, they are moving towards having a ballot, it looks like that.”

Sir Bob Neill, the chair of the justice select committee, who has called on Johnson to resign, also told Times Radio he believed public trust could not be restored with Johnson in post.

He said there was a “very strong feeling of a loss of faith, a loss of trust in the government”, adding: “I think that then feeds through into a sense that the government is unable to move on from this, a sense that there is a degree of drift. Although we’ve done some good things, many worthwhile things, we’re not actually getting a grip of the agenda going forward.”

He added: “That requires, I think, a fresh momentum and it requires real drive and I don’t think that the situation that unfortunately has happened in No 10 leaves the prime minister able to take that initiative.”
#Boris Johnson  #Johnson
Add Comment