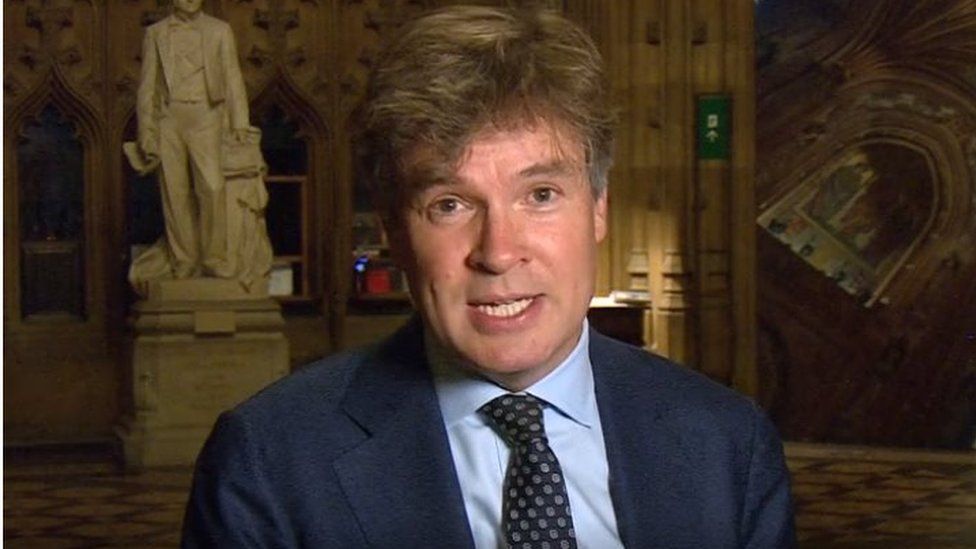 A crowd had gathered to protest the extension of coronavirus restrictions for a further four weeks.

The protesters shouted "traitor" at Mr Watt and accused him of "lying" about lockdowns being legal.

The Metropolitan Police said they were interviewing a man in his fifties at a police station in Hertfordshire in relation to the incident.

"A second man has been identified and is being actively sought by officers," it added.

Following the emergence of the footage, the prime minister tweeted: "Disgraceful to see the hounding of Nick Watt doing his job.

"The media must be able to report the facts without fear or favour - they are the lifeblood of our democracy."

In a statement, BBC director-general Tim Davie said: "The safety of journalists is fundamental to any democracy - they must be able to report unhindered free from abuse.

"There is absolutely no justification for any journalist to be treated in this way."

The footage was also condemned by the Home Secretary, Priti Patel, while media minister John Whittingdale said the incident was "totally unacceptable" adding that the UK was "taking the lead" in tackling intimidation of journalists through its national action plan.

Measures in the plan include new training for police officers and journalists, as well as "commitments from social media platforms and prosecution services to take tough action against abusers".

Labour's shadow culture secretary Jo Stevens, said: "This extremely disturbing footage showing clear intimidation of a journalist while carrying out his job is absolutely unacceptable and should be condemned in the strongest terms.

"It is shocking that a BBC lanyard makes someone a target like this."

Following suggestions online that officers should have intervened in the incident, the Metropolitan Police initially said: "In this instance, while officers were nearby as part of the policing response to the ongoing protest, they were not in the immediate vicinity of the incident."

The force later released a further statement saying: "An initial statement issued earlier today suggested officers were not in the immediate vicinity of the incident. It was drafted based on the 45 second video of the incident which was shared very widely on social media this morning.

"We were subsequently made aware of a longer piece of footage lasting 3 minutes and 28 seconds which shows the incident in full.

"It is clear that the incident began on Whitehall where officers were present."

It added that "the behaviour shown in the video is unacceptable - members of the public, of any profession, have the right to go about their day without being subjected to verbal harassment or actions that put them in fear for their safety".

Responding to concerns about police actions during the incident, the Met said it would "be reviewing our actions with a view to improving the policing of events for all Londoners".