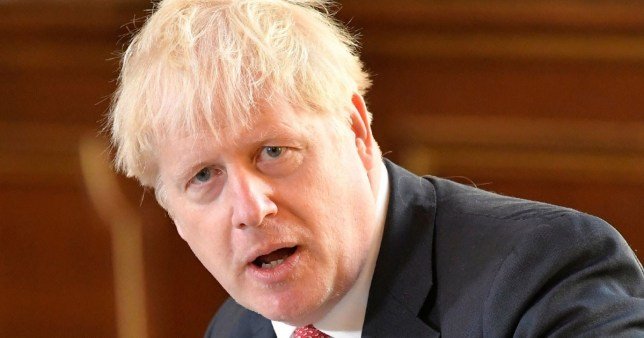 Boris Johnson has been accused of breaking the Government’s own social distancing rules after at least 50 Tory MPs packed into a room ‘cheek by jowl’ to hear him speak.

The Liberal Democrats have demanded an investigation after Mr Johnson addressed the MPs in a committee room on Wednesday night, despite a sign on the door warning only 29 people should be in the room to stop the spread of coronavirus.

Bloomberg reported the prime minister even quipped that he wanted people packed in together in the same way – ‘cheek by jowl’ – in time for Christmas.

People who were at the meeting said attendees initially followed social distancing rules by taking seats that were spaced one metre apart.

However, later arrivals ‘crammed’ together at the back of the room to hear Mr Johnson speak, three witnesses told Bloomberg.

Just 40 minutes after the meeting finished, the prime minister’s office tweeted a warning that gatherings of more than 30 people were banned under social distancing rules.

She said: ‘There is no end to the Tories’ hypocrisy.

‘The prime minister and his ministers have already evaporated the public’s trust in them with their shameless defence of Dominic Cummings, but it appears they have not learned their lesson.’

He said: ‘It is a workplace and social distancing of one metre plus was maintained as per government guidance for other workplaces.

Gatherings of more than 30 people are illegal. Breaking the rules could cost you thousands.If you attend an illegal gathering, you could be fined Â£100, increasing on each offence up to Â£3,200. pic.twitter.com/4QXz0FQ3hL— UK Prime Minister (@10DowningStreet) September 2, 2020

‘Obviously it is important that the democratic process is not interrupted.’

The potential breach comes after Mr Johnson’s chief aide, Dominic Cummings, was accused of breaking lockdown rules with a trip to Durham at the height of the pandemic.

Earlier this week, Defence Secretary Ben Wallace was forced to apologise after he was pictured shaking a man’s hand on his way to a cabinet meeting.

Mr Johnson was also criticised for saying he ‘shook hands with everybody’ while meeting coronavirus patients weeks before he himself tested positive for the disease.