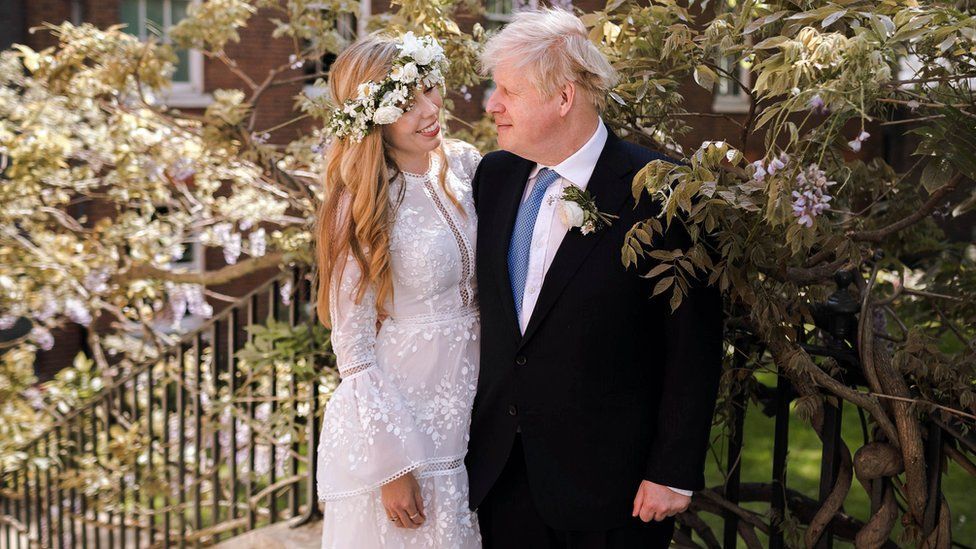 Newlyweds Boris and Carrie Johnson spent two nights away to mark their nuptials, according to Downing Street.

The prime minister and his wife married in secret on Saturday in a small ceremony at Westminster Cathedral.

A No 10 spokesman would not reveal where the couple went on their mini-honeymoon, but confirmed the PM was now "back at work".

Questions arose after the Catholic ceremony, as Mr Johnson has been divorced twice.

Asked by reporters if Mr Johnson was a Catholic or if he considered the wedding a breakthrough for those in the faith, a No 10 spokesman said they were not questions he had asked the PM.

They did, however, confirm that the prime minister had paid for the whole wedding himself.

Mr Johnson was the first prime minister to get married while in office in nearly 200 years, with 30 guests invited to the ceremony at short notice.

Downing Street said the couple would celebrate again with family and friends next summer, with a longer honeymoon also delayed until then.

One of the first roles of the new Mrs Johnson - who has confirmed she will take her husband's surname - will be hosting the spouses of political leaders when they gather in Cornwall for the G7 Summit later this month.

The Times reported that the bride rented three "decoy" dresses to ensure the ceremony remained secret.

The newspaper said that, along with the white dress she wore for the ceremony - designed by Athens-based Christos Costarellos - she hired three other outfits from ecofashion business My Wardrobe HQ without saying she would be wearing one to be married, concerned that a delivery of a white dress to No 10 would arouse suspicion.

Sacha Newall, who co-founded My Wardrobe HQ in 2018, told the paper: "We didn't know what it was for. We were just asked to supply some items.

"Then we saw what happened this weekend. It was all a bit of a surprise."

But amongst the excitement and desire for details, the question of the prime minister's faith - and whether he received any special treatment by the Church - remained.

Father Mark Drew, assistant priest at St Joseph's Church in Penketh, Warrington, said he has previously had to tell Catholic couples going through a divorce they are not able to remarry in the Church.

"It looks to them - rightly or wrongly - as if the Church is applying double standards and I do fear that this decision does make the Church look bad."

No 10 would not comment on the debate, but an archdiocese spokesperson told the Irish Times that Mr and Mrs Johnson were "both parishioners of the Westminster Cathedral parish and baptised Catholics".

They added: "All necessary steps were taken, in both Church and civil law, and all formalities completed before the wedding."