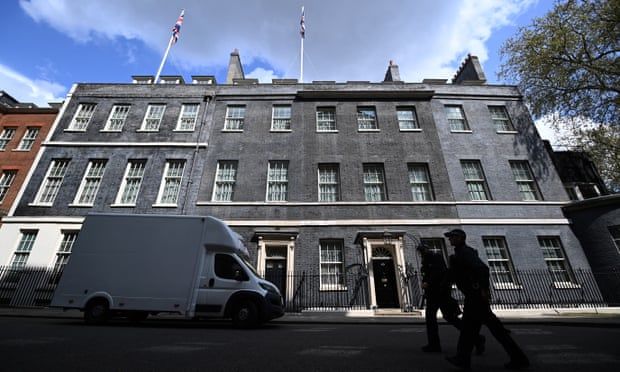 Boris Johnson accused of misleading ethics adviser over No 10 refurb

Funding plea to Tory donor last year appears to contradict PM’s assurance he did not know identity of benefactor
Boris Johnson has been accused of misleading his own ethics adviser, exposing the prime minister to a potential suspension from the House of Commons, as MPs demanded a fresh investigation into his personal donors.

With pressure mounting after a disastrous series of mistakes and scandals, Johnson’s integrity was once again under the spotlight after an official report suggested he gave differing accounts to investigators looking into the redecoration of his Downing Street flat.

Their calls were provoked by a report published on Thursday by the Electoral Commission, which had spent eight months investigating the funding of the costly redecoration. The commission fined the Conservative party £17,800 for serious donation reporting failures relating to the work.

But documents released by the commission also revealed Johnson sent a WhatsApp message to the Tory donor Lord Brownlow in November last year seeking more money for the costly makeover.

In an earlier inquiry into the matter, Johnson had assured Lord Geidt, the independent adviser on ministers’ interests, that he did not know who had given money for the work until it was revealed by the media in February this year.

Though Downing Street denied there was any inconsistency, Labour’s deputy leader Angela Rayner said Johnson “must now explain why he lied to the British public”. She said the prime minister was taking people for fools.

The Labour MP Margaret Hodge has written to the parliamentary standards commissioner, Kathryn Stone, urging her to investigate whether Johnson misled Geidt, who had cleared him of breaching the ministerial code.

In a letter seen by the Guardian, Hodge said it “appears that the prime minister may have lied” to Geidt’s inquiry about when Johnson became aware of the donations. “If these allegations are true, then this would be an egregious case of dishonesty and a breach of the Nolan principles.”

Yvette Cooper, the shadow home secretary, said the discrepancy in accounts was “extremely serious”. “How do standards function if PM doesn’t tell truth to Geidt?” she tweeted.

Geidt is said to be expecting an explanation from Johnson about the potential discrepancy between what he was told and what the Electoral Commission report found.

Should Stone launch an investigation, it would set Conservative MPs up for another clash over the regulation of MPs, with many Tories still wounded from an attempt to change the rules over sanctions for the Tory MP Owen Paterson, who was found to have breached lobbying rules.

Though it would be politically unprecedented, the commissioner’s powers do include recommending the suspension of an MP and – depending on the length of the suspension – a recall petition in their constituency. If 10% of voters there are in favour of a byelection, the MP must face the voters again

The furore over the flat refurbishment has dogged Johnson for months. The money for the work came from the Tory peer, David Brownlow, via his company Huntswood Associates Ltd. It was used to cover the costs of extensive and costly refurbishment changes to the flat above No 11 Downing Street, where Johnson, his wife, Carrie, and their children live.

The commission’s report sets out previously unreported details that suggest Johnson knew about the donation from Brownlow earlier than he had previously told Geidt. In his report, Geidt said the prime minister insisted “he knew nothing about such payments until immediately prior to media reports in February 2021”.

Nevertheless, the commission’s report makes clear that on 23 June 2020, Johnson offered Brownlow the role of chair of the Downing Street Trust role, and on 29 November messaged Brownlow on WhatsApp asking him to authorise further refurbishment works on the flat.

Downing Street claimed there was no inconsistency between the Geidt and Electoral Commission reports, as Johnson only knew that Brownlow was organising donations to pay for the refurbishment works, not that Brownlow was himself “the underlying donor”. Brownlow had “behaved in a confidential manner” after being appointed to head the blind trust in June 2020, Johnson’s spokesperson said.

The spokesperson declined to explain why some payments for the flat, including one of £59,000, were cited in the new report but had not seemingly been declared by Johnson, saying this was “in the most part a matter for” Conservative HQ. They added: “The prime minister has acted in accordance with the rules at all times. He has made any requisite declarations.”

Saying Johnson had full confidence in Geidt, the spokesperson declined to say whether Geidt had seen the messages to Brownlow before writing his report.

In total, Johnson repaid more than £110,000 for flat refurbishments, reported to have included wallpaper costing £840 a roll. Carrie Johnson is reported to have enlisted the sought-after interior designer Lulu Lyttle for the works.

Brownlow was approached to chair the Downing Street Trust, a trust to pay for works to Downing Street using anonymous donations. By June, when lockdown began to ease, the refurbishment was under way.

The Cabinet Office agreed to pay the extra costs from three invoices totalling £52,801, then be reimbursed by the Conservatives on the basis that a trust would be set up later.

Around a month later, on 6 August, the party reimbursed the government. In September, the supplier then invoiced the Cabinet Office for a further £12,967, which was forwarded first to Brownlow and then to Conservative central headquarters (CCHQ).

The following month, Brownlow confirmed in a crucial paper trail email that he would be making a £15,000 donation and “£52,801.72 to cover payments the party has made on behalf of the soon-to-be-formed ‘Downing Street Trust’ of which I am chairman”. On the same day, 19 October, he paid £12,967 to the supplier for the invoice received in September.

When a junior party staffer raised questions about the £52,801 which was treated as “funds for reimbursement” rather than a donation, they were told by a senior fundraising officer: “Don’t worry.”

Brownlow made two more payments directly to the supplier, bringing the total sum to £112,549. The following month, Johnson paid back the cash to the supplier, which then returned the funds it had received from Brownlow and the Cabinet Office.

How Johnson footed the bill remains unknown. The commission said: “Any payments between the prime minister and the supplier are outside the scope of our investigation.”
#Boris Johnson  #Johnson
Add Comment