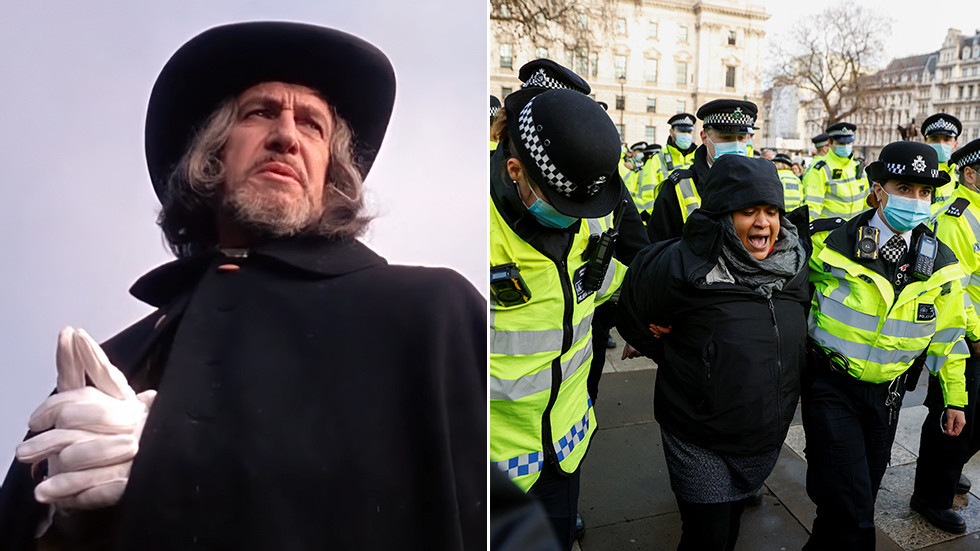 Back to the 1640s: Witch-hunt against 'Covid denialists' in UK is just a continuation of previous campaigns against dissenters

The targeting of public figures who speak out against lockdowns and other Covid-orthodoxies has intensified in Britain, and there are clear connections with previous power-structure-protecting campaigns used to silence heretics.

The 1968 historical horror film ‘Witchfinder General’, which tells the story of 17th century witch-hunter Matthew Hopkins, who terrorised the countryside of Parliament-held eastern England during the English Civil War, is a harrowing watch. Its brilliant young director Michael Reeves, unable to sleep, died from an overdose of barbiturates (thought to be accidental) just a few months after its release.

While the film may well give you nightmares, I do recommend you watch it. Because it helps us understand better what is happening in Britain today. We have gone hurtling back at warp speed to the witch-hunt frenzy of the 1640s. Shutting our eyes to what is going on around us is simply not an option, because then things will only get worse. History tells us that the only way witch-hunts, which are inimical to free societies, end is if enough people stand up to them.

In one memorable scene in ‘Witchfinder’, Hopkins (played by the great Vincent Price) tells the captured ‘witches’, who have been tortured to obtain a confession, that the ‘due process’ of the law will be applied. “You will each be tied in a prescribed fashion and cast into the moat. Should you then sink, we will know your confessions are false... If, on the other hand, you are seen to swim or float, then your confessions of witchcraft are proved without a doubt, and you will be withdrawn and hanged from the neck until you are dead.”

If you fail the swimming test, you die – and if you pass it, you also die. To be accused of being a witch is to be guilty. Evidence? Who needs that, when you are acting for the ‘good’ of society?

And so it is today, with the 21st-century equivalents of Matthew Hopkins, now repositioned – after years persecuting opponents of bombing Syria, anti-war supporters of Jeremy Corbyn, and anyone further to the left than David Miliband or further to the right than David Cameron – to chase after ‘Covid-denialists’, ‘conspiracy theorists‘ and ‘anti-vaxxers‘.

These ‘extreme centrist’ fundamentalists have the same arrogance, the same obsession with hounding heretics, and the same disdain for genuine due process. They may not go after ‘non-believers’ on horseback as Hopkins did in the 1640s, but they do it in the 21st-century ways of smearing, defaming, and ridiculing on social media, and in their vile ad hominem hatchet pieces which fellow witch-hunters make sure are well circulated. They hope that after seeing what happens to their targets, others who might be thinking of speaking out stay silent. And usually it works.

Don’t think having a knighthood or social standing can save you from the witch-hunt.

Look what happened to Sir Desmond Swayne, one of the very few MPs brave enough to speak out against lockdown. He was called a witch for suggesting, back in November, that Covid figures “appear to have been manipulated,” and through the classic ‘guilt by association’ witch-hunter’s technique of giving interviews to people/groups who had the ‘wrong’ views on other issues.

Angela Rayner, the Labour Party’s deputy leader, was absolutely outraged that Swayne had expressed a counter-hegemonic opinion and tweeted that she had written to the Conservative Party chair saying “urgent action” had to be taken against Sir Desmond. Swayne was then attacked for going on a radio show where, previously, ‘far-right’ people had also been interviewed. Again, guilt by the most tenuous association.

Keir Starmer’s Labour Party is right at the head of the power-structure-protecting witch-hunt, which is rather ironic given that Starmer is a former human rights lawyer. Human rights for people accused of being ‘conspiracy theorists’? No, they don‘t matter, just like human rights for those accused of witchcraft.

Labour seems obsessed about clamping down on ‘dangerous disinformation’ and those who promote it – which is again rather ironic, given that it was a Labour prime minister, Tony Blair, who told us Iraq had weapons of mass destruction which could be assembled and launched within 45 minutes. That was disinformation that led to a war in which hundreds of thousands of people lost their lives.

Yet, most of the witch-hunters who today tell us that they are only concerned with the ’truth’, and ’public safety’, not only acted as cheerleaders for that fraudulent war, they also witch-hunted opponents of it at the time. If you didn’t want to invade Iraq in 2003 you were labelled a ’Saddam apologist’ in the same way you were called an ’Assad apologist’ if you spoke out about bombing Syria ten years later. The targets of the witch-hunt may change, but the wording doesn’t – and that‘s the giveaway. The epithet ‘denier’ is a regular charge.

One individual who you’ll usually find in a prominent position at the head of an establishment-endorsed witch-hunt is Nick Cohen, a columnist on the Observer who also contributes to Private Eye, a power-structure-protecting ’satirical’ magazine which punches downwards and not up. Nick’s modus operandi is to pen attack-dog pieces on anyone, or anything, which threatens the cultural and economic dominance of the ‘extreme centre’. He’s gone after the anti-war left, the ‘Faragist right’, Jeremy Corbyn supporters, Donald Trump supporters, Brexiteers, opponents of Western military intervention in Syria, Russian media, David Icke, ‘5G cranks’ and now ‘Covid denialists’. Yet while obsessing about ‘conspiracy theorists’ Cohen, a strong supporter of the Iraq War, routinely peddles one of his own – that everything that goes wrong in the world is the fault of the ‘far-left’ and the ‘far right‘, with Russia and the ‘evil Putin’ never far away.

Like other witch-hunters he’s very keen on branding people who dare to express the ‘wrong’ views as ‘deniers’. In a 2014 piece on ‘climate change deniers‘ he wrote, belligerently: “And please, can I have no emails from bed-wetting kidults blubbing that you can't call us ‘global warming deniers’ because ‘denier’ makes us sound like ‘Holocaust deniers’, and that means you are comparing us to Nazis? The evidence for man-made global warming is as final as the evidence of Auschwitz. No other word will do.”

Got that? No other word will do. If Nick says you’re a ‘global warming denier’ then a ‘global-warming denier’ you are, even if you accept global warming is taking place but are sceptical about it being man-made. Nick’s word is final, like Matthew Hopkins’. Whether you ‘sink’ or ’swim’, you’ll have the same fate.

How did we get here? How did we allow public debate to be destroyed in such a way by such terrible authoritarians? I’m old enough to remember a media landscape where people weren’t terrified of expressing the ‘wrong’ views for fear of being witch-hunted. Where there was genuinely free and open discussion. When our democracy was much more vibrant.

Today in Britain, the political climate is as stifling as it was in the 1640s – the last time we lived under such grim “you can’t say that, you can’t do that” tyranny. How we can rectify matters – and call time on the 21st-century successors of Matthew Hopkins – is what I will be discussing in my next op-ed.