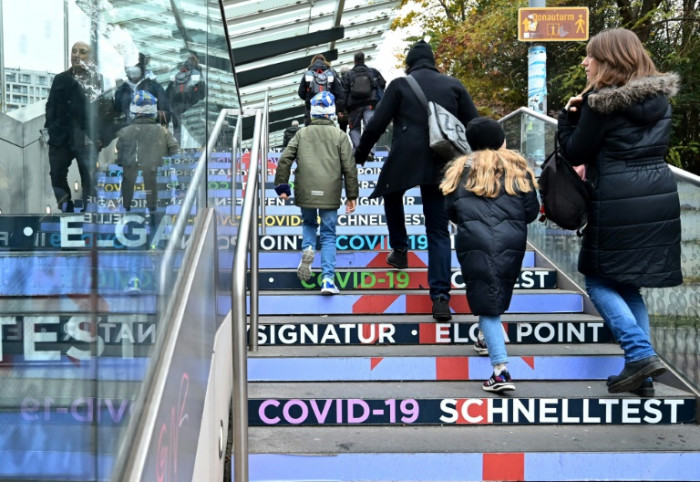 Austria became the first EU country on Monday to impose a lockdown on the unvaccinated and the first to start inoculating children as young as five, as the virus strengthens its grip on the continent.

Surging infection rates have placed Western Europe once again at the heart of the global epidemic and governments are being forced to take action, the Netherlands already announcing the region's first partial lockdown of the winter.

Austria has inoculated about 65% of its nine million people, below the EU average of 67%.

Daily new infection rates have been hovering at around 12,000 in recent weeks, up from roughly 2,000 a day in September.

But the restrictions on the unvaccinated have caused some resentment, with hundreds gathering in Vienna on Sunday to protest.

"This restricts my life, my freedom. It’s time that more people spoke up," protester Sabine, a 49-year-old energy consultant, told AFP at the rally, calling the move "discrimination".

As part of efforts to increase vaccination coverage, authorities in Vienna have also become the first in the EU to start vaccinating children between the ages of five and 11.

Cartoons of ninja turtles and tigers adorned coronavirus vaccination booths on Monday to welcome children at a convention complex serving as a vaccine clinic.

One of the first into the colourful booths on Monday was eight-year-old Pia Schwarzl.

She told AFP the jab had hurt "a little" but that she was looking forward to "staying at home and playing" for the day.

Her father, 41-year-old Gerald Schwarzl, said he had decided to have Pia and her five-year-old brother Theo vaccinated so that they "don't get seriously sick".

"We believe they will be protected just like they are with other vaccinations that they've had," he said.

The city authorities said some 10,000 appointments had been made for children and they had the capacity to jab 200 youngsters a day.

But Vienna's Mayor Michael Ludwig said the situation was "serious" and that the city had the right to pursue a more "determined path".

'Want everyone to feel safe'

Austria's government hopes its measures can stem the virus and take the pressure off struggling intensive care units.

It also wants to drive up the "shamefully low" rate of fully vaccinated residents.

The interior ministry has promised extra patrols to implement the lockdown.

But the measure has been widely criticised as unenforceable and unlikely on its own to reduce contacts by the amount necessary to curb the contagion.

Debates are already being aired between ministers about possible further measures, such as a night-time curfew for all.

At one of Vienna's famous Christmas markets, stallholders were hoping the new measures would prevent a repeat of last year when the markets were closed to combat the second wave.

Daniel Stocker, the manager of the market in front of the capital's City Hall, said people were "willingly" complying with the requirement to have either been vaccinated or recovered from the virus.

"We want everyone to feel safe," he says.