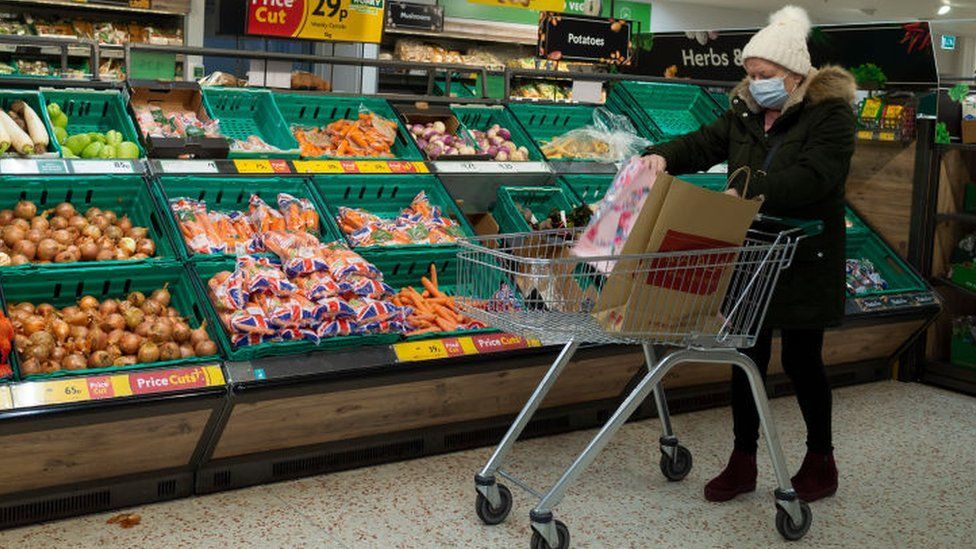 Asda and Morrisons cut prices as supermarkets fight for customers

Morrisons and Asda are cutting prices as supermarkets face a fierce battle for customers with the soaring cost of living hitting households' finances.
Both supermarkets have been losing customers to discounters such as Aldi and Lidl as price pressures grow.

Morrisons said it would offer an average 13% price cut on more than 500 goods including eggs, beef and rice.

Meanwhile, Asda announced it had "dropped and locked in" prices on some products until the end of the year.

The cost of living is rising at its fastest rate in 30 years in part due to soaring food prices.

Morrisons, which is the UK's fourth-largest supermarket after Tesco, Sainsbury's and Asda, said the cuts would cover refrigerated, frozen and store cupboard food and affect around 6% of its total sales volume.

"We know that our customers are under real financial pressure at the moment and we want to play our part in helping them when it comes to the cost of grocery shopping," said boss David Potts.

Items being discounted include cereal, cooking sauces, chicken and sausages as well as flour, bread and ham.

Meanwhile, Asda said more than 100 products covered by its "dropped and locked" promise ranged from some fresh fruit and vegetables to fresh meat and frozen food.

The supermarket said prices would drop by 12% on average.

"We know that household budgets are being squeezed by an increasing cost of living and we are committed to doing everything we can to support our customers, colleagues and communities in these exceptionally tough times," said Mohsin Issa, co-owner of Asda.

The cost of living squeeze is starting to bite and shoppers are on the hunt for value in the supermarket aisles.

Recent industry data shows more people are ditching the big brands in favour of own-label products to save money.

They've also been turning to the discounters, Aldi and Lidl. After a tough pandemic, they've been growing market share.

Tesco and Sainsbury's have Aldi price-matching campaigns and have been performing better than Morrisons and Asda.

Now these two are fighting back. They need to. Morrisons and Asda have traditionally served budget conscious shoppers and can't afford to haemorrhage customers to the discounters.

Last month, Asda launched its Just Essentials range promising an expanded line of low-cost products in all its stores from May.

In February, the grocer said it would offer a wider range of low-cost goods in its stores after being criticised by food poverty campaigner and chef Jack Monroe.

Last week, the UK's largest supermarket chain, Tesco, said its profits last year more than trebled, but said its performance this year would be affected by the need to keep prices down.

Both Asda and Morrisons are losing out as customers turn to discounters Aldi and Lidl, to cut their costs, according to research firm Kantar.

Kantar's head of retail Fraser McKevitt said: "We're really starting to see the switch from the pandemic being the dominant factor driving our shopping behaviour towards the growing impact of inflation, as the cost of living becomes the bigger issue on consumers' minds."

In March, one food boss told the BBC food price inflation could rise as a high as 15% this year as a result of the war in Ukraine.

Ronald Kers, the boss of food firm 2 Sisters, blamed the rising prices of wheat and natural gas, which is used to heat greenhouses and to make fertiliser.
Add Comment