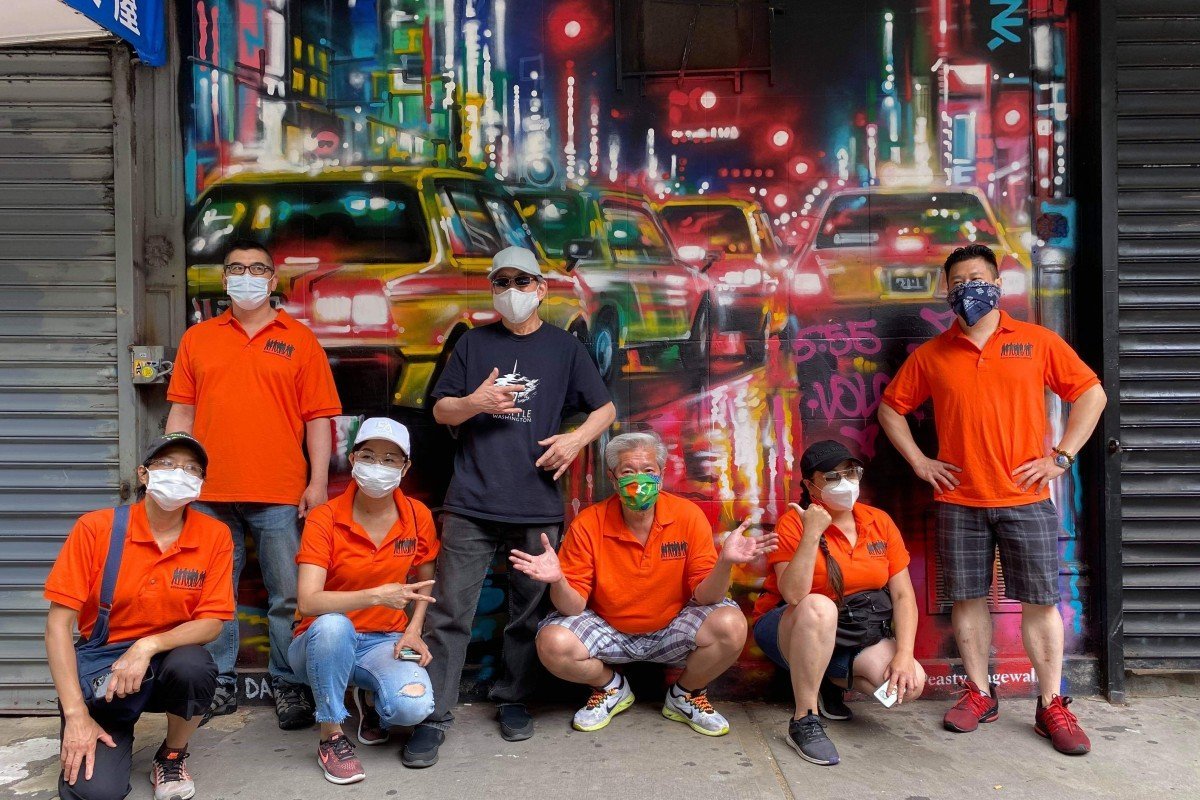 In New York and San Francisco, Chinatown residents have formed neighbourhood patrols in response to attacks they say are inspired by the pandemic and rhetoric by US President Donald Trump.

Chinese-American neighbourhood patrols in New York and California are bracing for a spike in anti-Asian harassment and possible violence in the days leading up to the November 3 US presidential elections and what could be a turbulent aftermath, community activists say.

While Chinese-Americans have faced racism throughout America’s history, researchers and activists assert that Sinophobia has surged as a result of US President Donald Trump’s inflammatory language – particularly in the wake of the coronavirus pandemic, which Trump and other officials in his administration have repeatedly tied to China.

Since March, when the first US outbreaks of the pandemic began to spread, the Stop AAPI [short for Asian-Americans and Pacific Islanders] Hate reporting centre has recorded more than 2,700 incidents of discrimination, verbal abuse and physical attacks in 47 states and Washington.

In an interview, Russell Jeung, the Stop AAPI Hate chair and an Asian-American Studies professor at San Francisco State University, said that many of the rising incidents could be directly correlated to incendiary rhetoric from the Trump administration. 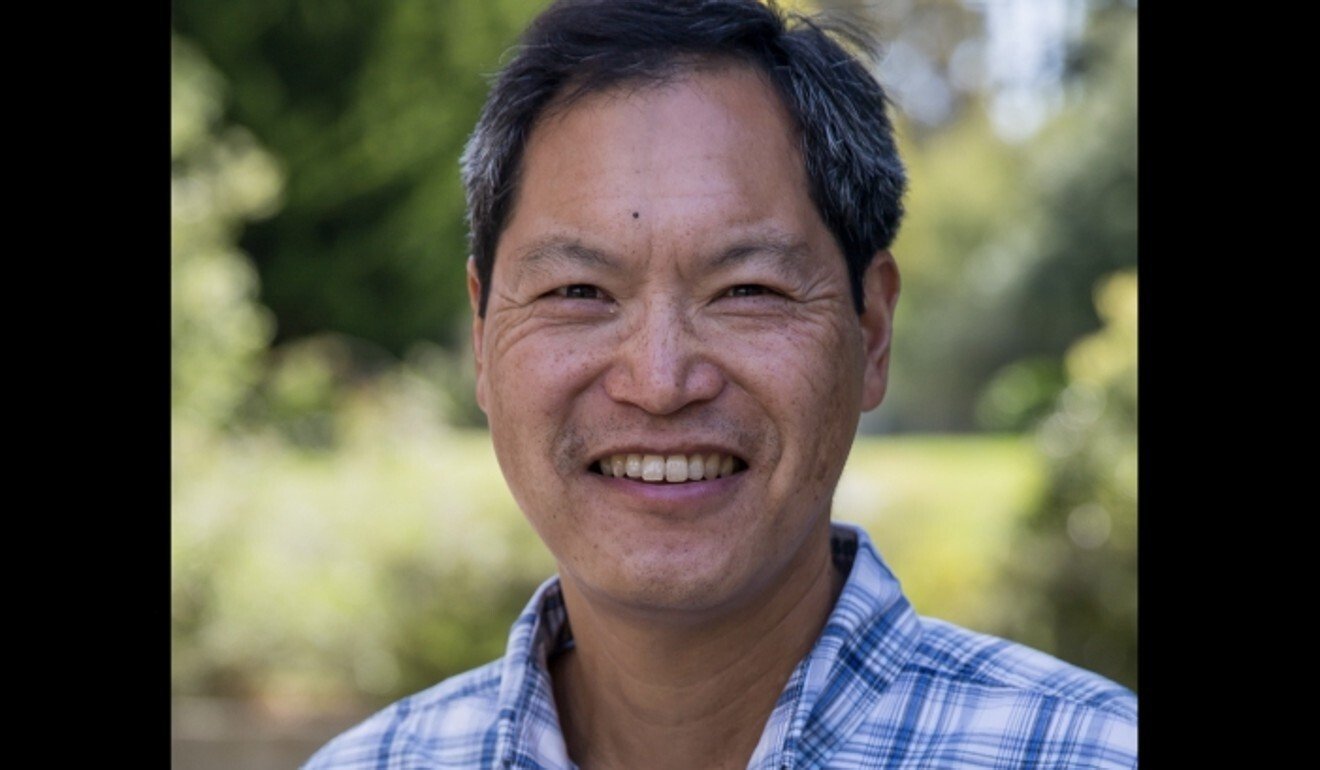 Russell Jeung, chair of Stop AAPI Hate, which has recorded more than 2,700 incidents of discrimination, verbal abuse and physical attacks since March.

“The current administration exacerbated the situation greatly by insisting on using the term ‘Chinese virus’ rather than a natural virus,” he said. “That racialised the disease … it spreads quickly, and hate speech then leads to hate violence.”

Nearly one-third of reported incidents through August included rhetoric specifically mentioning China. In one incident outside a hospital in Boston, for example, a man shouted accusations that the Chinese were “killing everyone”.

In another incident, in Pennsylvania’s Dickson Country, an Asian resident was told that the “pandemic wouldn’t have happened if you’d stayed in your country where you belong” and accused of bringing Covid-19 “on purpose”.

“Our self-reported incidents are just the tip of the iceberg,” Jeung added, noting that some conservative estimates suggest that as many as 1,000 racist incidents against Asians take place each day in California alone. “It’s actually a really high number.”

‘I had to do something’

Among those who have seen the impact of Trump’s rhetoric on America’s streets is Karlin Chan, a community activist and lifelong resident of New York City’s sprawling Chinatown.

“At the beginning [of the pandemic], people would make snide little remarks under their breath, and you’d see it in their body language,” he said. “But when the lockdown went into effect and the streets were devoid of people, that’s when the harassment began. Not so much physical, but a lot of verbal harassment.” 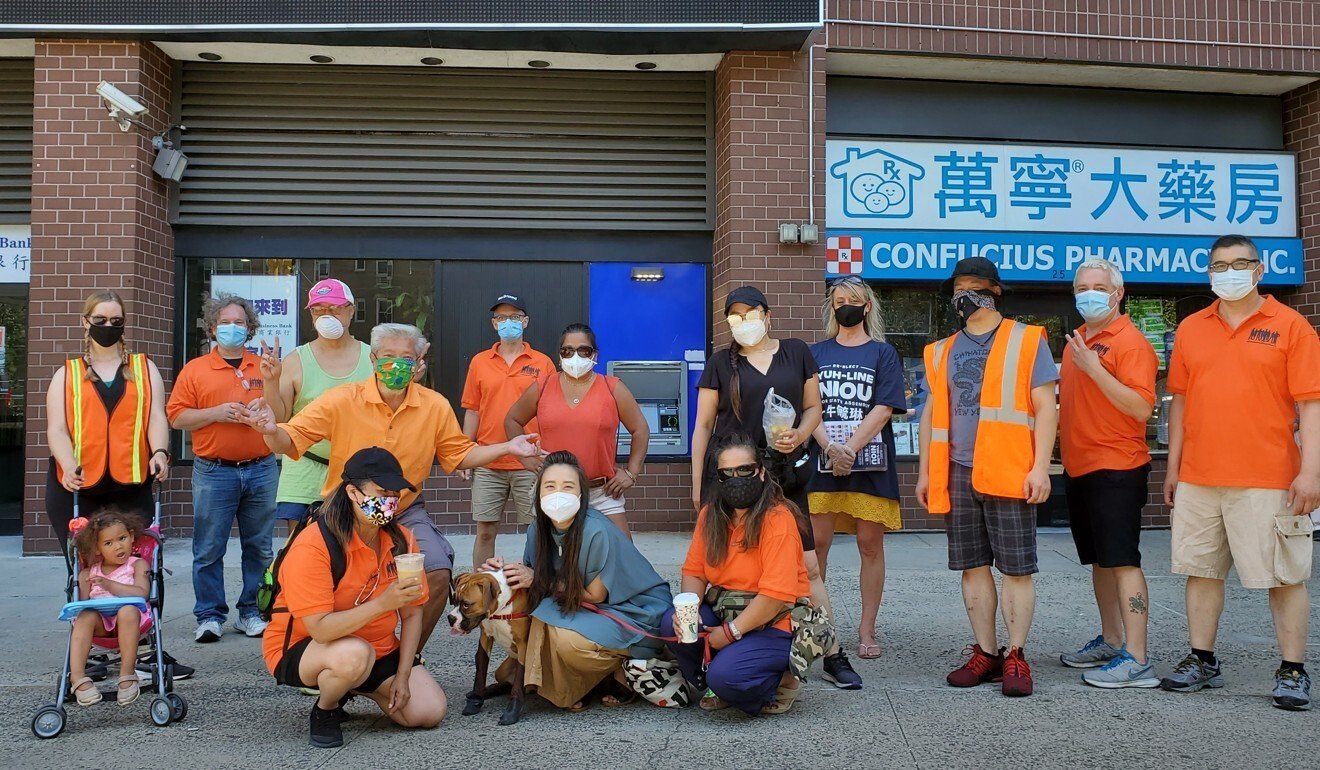 Karlin Chan said he organised block watches in Manhattan’s Chinatown because “people were even afraid to leave their houses”.

Among the incidents, Chan said, were repeated barrages of racist slurs and insults on subway passengers riding between Manhattan’s Chinatown and another in nearby Queens. In another – which he called a “crime of opportunity” amid the lockdown – a local laundromat was robbed.

Not all the reported incidents, Chan said, were verified. Some cases, such as a woman who was reportedly robbed twice in one day, are “hard to believe”. Other incidents took place outside the immediate area, such as an acid attack on an Asian woman in Brooklyn’s Sunset Park.

In another attack in September, a promising Japanese jazz musician was set upon by eight assailants at a subway station on West 135th Street in upper Manhattan.

While the police did not classify the incident as a hate crime, the victim told authorities and journalists he remembers being called “Chinese” in the assault, which left him with multiple broken bones.

The harassment, Chan recalled, quickly created an atmosphere of fear among Chinatown residents, particularly women and the elderly.

“Even incidents that we couldn’t verify, or that weren’t around here, spread quickly on social media,” Chan added. “Lots of non-English-speaking people would spread them on WeChat, for example. They wouldn’t know exactly where they happened or what happened, but it spread anyway.”

Asian-Americans, harassed over coronavirus, push back on streets and social media

“People were even afraid to leave their houses and get out there to do shopping and buy food,” he said. “I had to do something about it. I’ve always fought for this neighbourhood … so I started patrolling, trying to keep an eye out and seeing if this harassment is actually going on. And it is.”

As the weeks and months of the pandemic wore on, what began as one or two-man patrols of community activists has evolved into a Chinatown ‘block watch’ with more than 40 volunteer members, complete with orange uniforms.

“What it does is visually assure our residents and business owners, who were sometimes getting robbed, since nobody was there,” Chan explained. “It’s a deterrent.”

In Chan’s view, it’s clear what – and who – drives the rising incidence of racism against the community.

“There’s no civility anymore. It got very bad in the last two and a half years,” he said. “The dialogue coming out of Washington seems to have legitimised racism in this country and promoted it around the world.”

Across the county, residents of San Francisco’s Chinatown – the oldest in North America – have also banded together to protect their community at a difficult time.

At the heart of this effort is Leanna Louie, a China-born immigrant and 11-year veteran of the US Army, where she served as both an enlisted soldier and later as an officer, including a tenure as an executive officer responsible for the day-to-day organisation and training of a company of 120 soldiers.

Together with other residents – including a number of other Asian-American veterans of the US Army, Marine Corps and Navy – Louie helped set up the United Peace Collaborative, a registered non-profit organisation.

Louie said she felt compelled to act after learning of “bad things” happening in the area, particularly the vicious attack on the president of a local family association.

“He was beaten and mugged by three criminals, who took away his Rolex watch. They also beat his friend who tried to help him,” she recalled. “All the while, Chinatown was just watching, scared to get involved.”

This attack, she added, was just part of a larger of wave of incidents of pandemic-inspired racism against Asian-Americans – including those outside the Chinese-American community.

“Things have gotten worse. For one, the president calling it a ‘Chinese’ virus is very problematic, even for people that only look Chinese,” she said. “Japanese people are also getting beat up, and Filipinos are also having problems. If you look Asian, you can be in trouble. People think you’re not human … it’s horrible, disheartening and very concerning.” 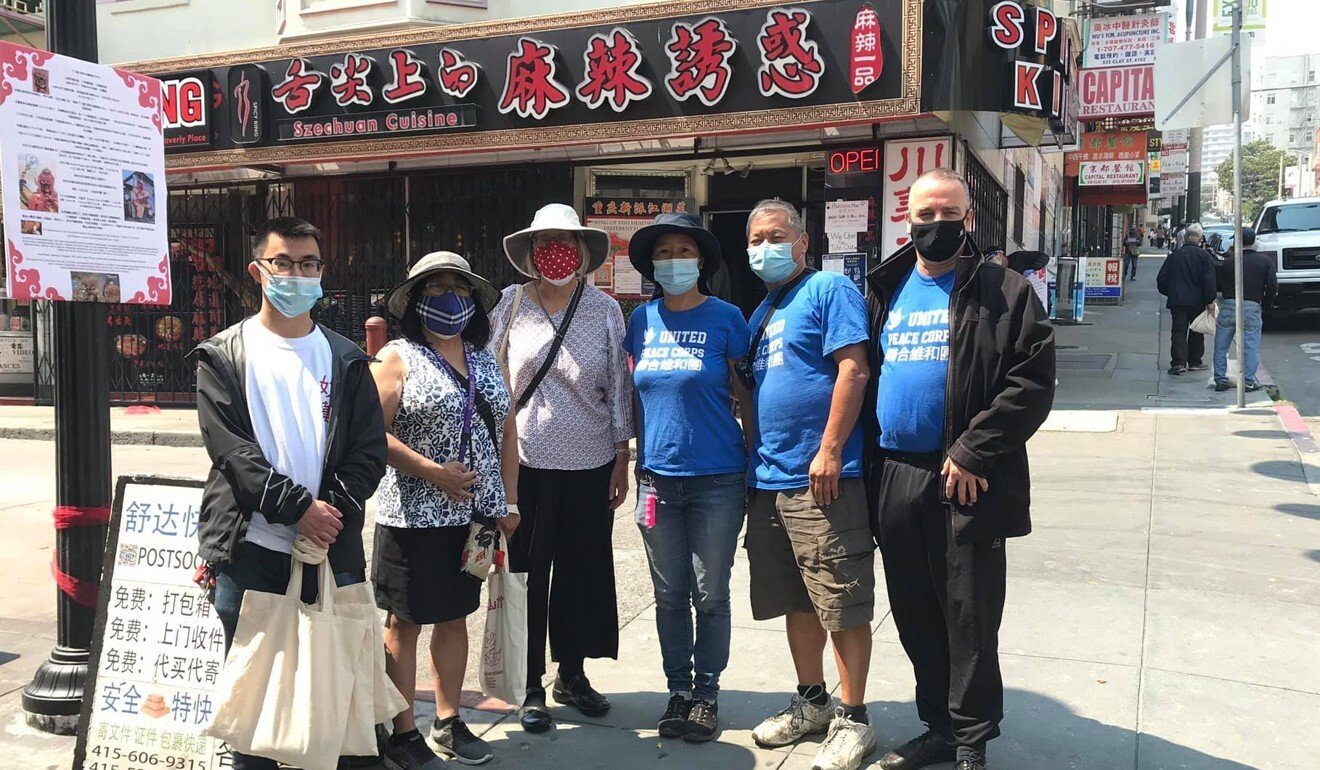 Leanna Louie helped set up a neighbourhood watch in San Francisco’s Chinatown after an attack on the head of a local family association.

In San Francisco, Louie said, the line between outright incidents of racism and of opportunistic crime are often blurred. She said that the UPC’s greatest success came on the night of May 30, amid the unrest that rocked the country following the death of George Floyd in Minneapolis, Minnesota.

Tipped off that looters were heading to Chinatown from downtown, Louie and a handful of UPC volunteers came face to face with a group of over 50 looters, who had already severely beaten one resident. The UPC patrol managed to quickly alert local police, and Louie says that the cellphone footage she provided led to the arrest of four suspects.

“We were tipped that something was going on and we did what we could to stop them,” she said. “If we weren’t there, they could have destroyed the entire Chinatown, all 22 blocks.”

On both coasts, activists say that part of the reason they have had to act is that many local residents – particularly more recent Chinese immigrants – are reluctant to report crimes or harassment to police forces that they don’t trust.

“Nobody calls 911 in Chinatown. They are afraid of miscommunication, and there are a lot of trust issues,” Louie said.

“Of the 120 officers or so officers, only eight of them are bilingual in Chinese languages,” she said. “The population of Chinatown is 34,000 people, many of whom are only Chinese-speaking.”

Similarly, in New York, Karlin Chan said that many residents of Manhattan’s Chinatown are hesitant to deal with police at all, let alone report crimes.

“People don’t want to deal with government and want to stay under the radar,” he said. “People are afraid of retaliation, but also, if you don’t speak English, you have no idea what the police are saying, and they have no idea what you’re trying to tell them.”

“People think it’s more frustrating even than getting mugged,” he added. “So they’re very reluctant.”

Looking ahead, activists and self-organised patrols may prove even more necessary in Chinese-American communities than they have been even during the pandemic. Both the UPC in San Francisco and Karlin Chan’s Blockwatch in New York say they have no plans to end their activities.

Stop AAPI Hate believes that the next few days will be particularly dangerous for the Asian-American community as candidates – including Trump – use anti-Chinese rhetoric in a bid for votes.

“When people China-bash, they also bash Chinese in the US. This won’t go away soon,” Jeung said. “The issue is really urgent now … People are going to blame China even more. We have to be even more vigilant.”

No matter who wins, xenophobia and harassment against Chinese-Americans is unlikely to dissipate in the months following the election.

“We’re really fearful of increased attacks on Asians in America, through January, at least,” Jeung said. “The fact that we have a looming Cold War with China will again see us targeted as the enemy. I don’t think this will go away soon.”

In this setting, he added, it is likely that organizations and local groups will need to work closely together to protect Asian-American communities.

“I see mobilisation on all levels,” he said. “We hold governments and corporations accountable. But in lieu of their failure to respond, Asian-American communities have to mobilise to protect ourselves, public safety, and public health.”