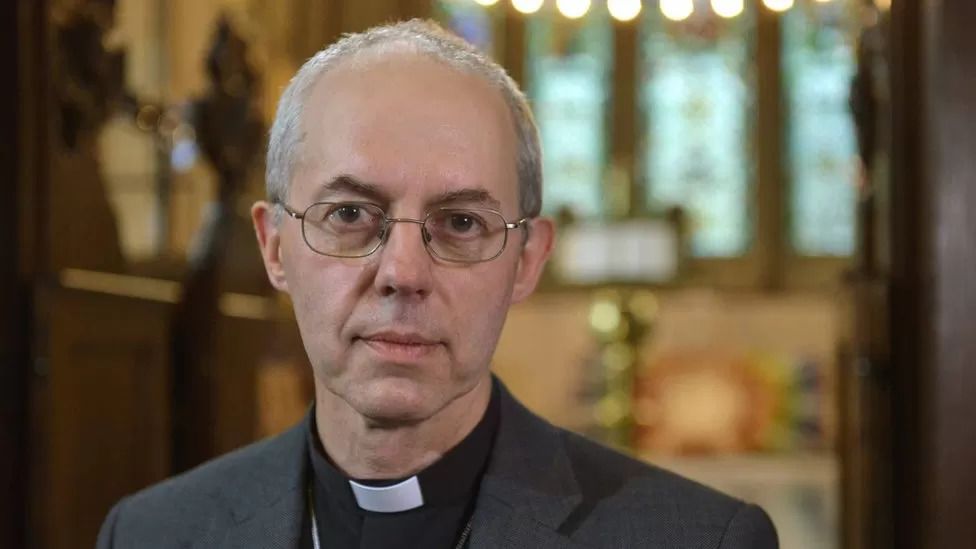 In his first Christmas sermon since the death of Queen Elizabeth II, the Archbishop of Canterbury praised the late monarch's life of service.
The Queen "put her interest after those of the people she served", Justin Welby said.

His sermon also remembered those suffering "immense" hardship in the UK's cost-of-living crisis.

And despite darkness around the world, there is "unconquerable hope" in the birth of Jesus Christ, he said.

The archbishop referenced the "desperate struggles of hospital wards" as well as those who make journeys in small boats to reach the UK, as he delivered his annual Christmas Day message.

Mr Welby said the late Queen "in obedience to the Christ-child lived a life of service and put her interest after those of the people she served."

In his sermon at Canterbury Cathedral, he praised those who have acted with love and service towards others over the past year - including a 10-year-old girl he met volunteering at a food bank in Canterbury, people who have welcomed refugees into their homes, NHS staff and life-boat crews.

The archbishop expressed concern for those struggling with "immense anxiety and hardship" during the UK's cost-of-living crisis.

He said: "In Jesus Christ, God reaches out to each one of us here; to those who like his family have no resources, into the dark cells of prisons, into the desperate struggles of hospital wards, to those on small boats, to the despairing...and says: 'Take me into your heart and life, let me set you free from the darkness that surrounds and fills you, for I too have been there.

"And God says in me there is forgiveness, hope, life and joy, whoever and wherever you are, whatever you have done."

He appealed to South Sudan and Russia to end their respective wars, and said that "the world does watch, does care and will hold rulers responsible for justice".

He said: "Even where the world forgetfully turns a blind eye to injustice and suffering, pays no attention to a war, God is present through Jesus in the world... God does not give up on us."

"We are conscious of darkness" he said as he recalled standing next to a mass grave in a church yard in Bucha, Ukraine in the spring.

"Even in Bucha, among all the horror, the darkness does not overcome the light."

Separately in a joint Christmas message, Wales' Anglican and Catholic archbishops honoured "the memory of a selfless and dedicated Queen".

At Christmas Eve Mass in the Vatican, Pope Francis condemned human "hunger for wealth and power" in what appeared to be a reference to the Ukraine war and other conflicts.

He said "How many wars have we seen!" where the main victims were "the weak and the vulnerable".
#Pope Francis
Add Comment