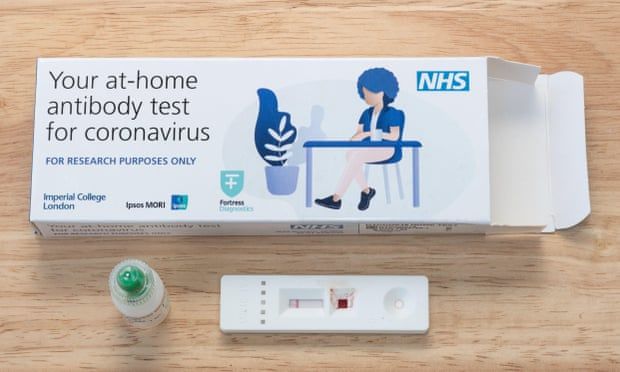 UK scheme to explore post-infection protection could also illuminate reinfection rates and immunity across different variants, say experts
Antibody tests are to be offered widely to the UK public as part of a new programme which a leading scientist said could lead to targeted booster vaccinations for vulnerable people.

Thousands of adults will receive tests each day as part of a government scheme exploring how much natural protection people have after getting coronavirus.

Anyone over the age of 18 will be able to opt in from Tuesday when taking a PCR test, with up to 8,000 recipients having two antibody tests sent to their home if they test positive.

On Sunday, there were 32,253 positive cases recorded in the previous 24 hours, the government said, with a further 49 deaths.

People will be sent two finger-prick antibody tests to complete at home and to send back for analysis. The first must be taken as soon as possible after the positive result, and the second must be taken 28 days later.

Francois Balloux, the director of the UCL Genetics Institute, said the study will provide much-needed data.

“In the whole context of boosters, I am not a big fan of giving boosters to the population irrespective of age and health. I don’t think it essential at this stage,” he said.

He added it was also ethically hard to justify giving boosters to young and healthy people.

“I think providing boosters on the condition on or presence of antibodies is very clever. When people ask me – should I get a booster? – it is reasonable to give boosters to those who do not have sufficient antibodies.”

He added that, however, some people can still be protected from Covid without antibodies.

Balloux said boosters for everyone did not make sense but targeted ones could be rolled out. He added that the new programme would give a good idea of reinfection and provide “key information”.

“At the moment we don’t have an idea of the number of reinfections,” he said.

Dr Muhammad Munir, a virologist from Lancaster University, said the primary aim of giving out antibody tests is to see whether antibodies protect against other variants of the virus.

He said people who request tests should not think they will not be reinfected upon testing positive for antibodies – or have any more protection. “It cannot tell you that you will not get Covid again, or that you cannot infect people,” he said.

Munir agreed with Balloux that the information collected could be used to help decide who needs boosters, however.

“People would be sampled before it is decided whether or not they need a booster but that is not the primary objective of the research.”
Antibodies for Covid-19 mean you are likely to have some protection from severe disease, but it’s still possible to get and then spread the virus. Antibodies take time to develop. Most people make antibodies within 28 days of being infected or vaccinated, but it can take longer.

The Department of Health and Social Care says it will be the first time antibody tests have been made available to the general public, and the scheme could also provide insight into any groups of people who do not develop an immune response.

The data will be used to inform the ongoing approach to the pandemic and give further insight into the effectiveness of vaccines on new variants.

The announcement comes amid ongoing debate over the rollout of booster jabs in the UK.

Sajid Javid, the health secretary, has said he is “confident” a booster vaccine campaign can start next month, despite reports that experts want more time to consider whether they are needed.
#Coronavirus  #Vaccines  #COVID-19  #vaccine  #Covid
Add Comment