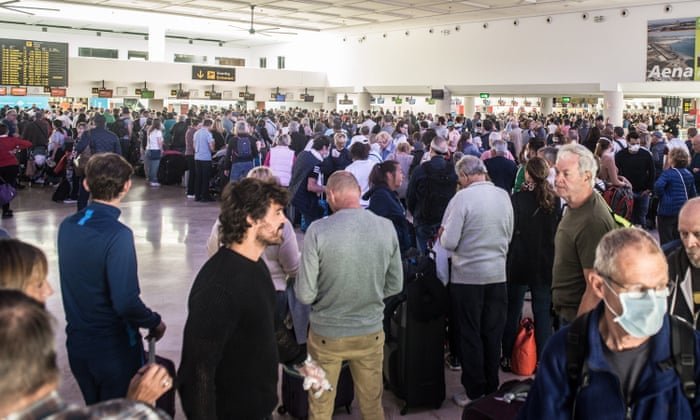 Anger grows among Britons on holiday as lockdowns block returns

Stranded British holidaymakers decry lack of information from Foreign Office and ‘exorbitant’ cost of replacement flights
Thousands of British holidaymakers could find themselves stranded abroad, as flight cancellations, travel restrictions and lockdowns due to the global coronavirus pandemic complicate their journeys home.

As many as 100,000 tourists may still be in Spain, despite a near-total lockdown and government orders that all hotels be shut down within the week. Recent days have seen the epidemic in Spain spiral into one of Europe’s worst, claiming more than 1,000 lives.

Between 80,000 and 90,000 tourists are thought to be in the Canary Islands while another 15,000 are in the Balearic islands, Ángel Víctor Torres, the regional leader of the islands, said on Thursday.

“It doesn’t make sense that anyone would come here for tourism,” he told reporters, noting that emergency measures have forced beaches and pools to close. “There’s no tourism to be done.”

British travellers around the world told the Guardian of arduous days spent trying to return home, their efforts stymied by flight cancellations and scant communication from airlines.

Steve Biggs said his parents, both in their 70s, had just found out their Friday flight with TUI from Tenerife in Spain to London’s Stansted airport had been cancelled. Their only option was to fly into Bournemouth and make the hours-long drive to their home in Bury St Edmunds.

“Mum has heart issues and has upped her medication as she is stressing,” said Biggs. “And that is putting pressure on her heart.” The situation was compounded by a lack of communication from TUI, he added.

A spokesperson for TUI UK said the company was working hard to bring back all of its customers from Tenerife and that it would be in touch with customers directly.

The British embassy in Spain said flights between the UK and Spain continue to operate. the ambassador, Hugh Elliott, said in a video posted online on Thursday: “Tens of thousands of British citizens have successfully returned to the UK in recent days. We are talking to the airlines to ensure options for your return remain open.”

In Peru, hundreds of Britons have been left stranded after the government imposed a state of emergency on Monday, enforcing a 15-day self-quarantine and, days later, a night-time curfew. No flights are allowed to enter or leave Peru without government permission.

Many are furious that the British embassy in Lima has alerted them to commercial flights at “rip-off” prices. Instead, they argued, the Foreign Office (FO) should be organising its own airlift for its grounded citizens.

Luke Martin and Jessica Stafford, both 25, have been stuck in a rented apartment in the city of Cusco for the past week after their flight home was cancelled. The British embassy sent out a communique asking people to register their interest for an Avianca flight costing $3,500 (£3,000) on Wednesday.

“Obviously we want to get home ASAP but £3,000 is too much money for most people to afford at such short notice. No compensation has been offered,” said Martin who, with his partner, had been on a dream trip through South America. The emergency measures brought in by the Peruvian government mean they can only leave the flat one at a time to buy food or medication.

“We are watching flights leave the airport every day with citizens from other countries aboard whilst our government is still claiming that they are trying to get permission from the Peruvian government,” Martin said.

The FO said it was “engaging with a number of international partners and commercial airlines to see how we can help Britons still in Peru best return to the UK”.

“We are working intensively to help all those who wish to leave and actively exploring what further flight options can be made available,” it added on Friday.

The British ambassador to Peru, Kate Harrisson, tweeted: “I fully appreciate that the immediately available commercial offers will not be viable for everyone,” adding that remote working due to the lockdown “makes our ability to operate particularly challenging”.

The veteran Welsh-language campaigners Ffred Ffransis, 71, and his wife Meinir Ffransis, 69, had been on the trip of a lifetime in South America when they were also left stranded in Cusco.

Ffred Ffransis, who has a heart condition, said he was concerned about being stranded in the high altitude of Cusco, which sits at 3,400 metres above sea level. “I planned to be here for a few days rather a few weeks,” he said.

“The (UK) government have been hopeless and it’s a sign of things to come,” he said.

He described the Avianca flight offer as an “absolute swindle”.

In Lima’s Barranco neighbourhood, Sheila Johnston, 67, and her husband Robert Stoodley, 73, waited in their hostel for updates.

“I feel we’re being totally forgotten about,” said Johnston. They had been on a seven-week South American trip and had planned to return on Monday.

“We do consider ourselves to be high risk and I think we deserve more response and support,” said Johnston, who has asthma. Her husband suffers from early-stage Parkinson’s disease.

“The thing that really annoys us is when we read [the British foreign secretary] Dominic Raab implying that people have traveled recklessly and they have to take responsibility for themselves,” added Johnston, a former arts and culture journalist.

“We didn’t travel recklessly. There was no ban on travel when we set out.”

Amid reports of the chaos that greeted Britons trying to get home from Morocco, the British ambassador to Morocco said the embassy was working with officials in Spain to move Britons in northern Morocco into Gibraltar, via Spain’s Ceuta.

“I realise that this is an extremely stressful and upsetting time for you and that you have lived through some very frustrating moments this week,” Thomas Reilly wrote on Twitter. “I am sorry that sometimes our communications have not been good enough.”
Add Comment