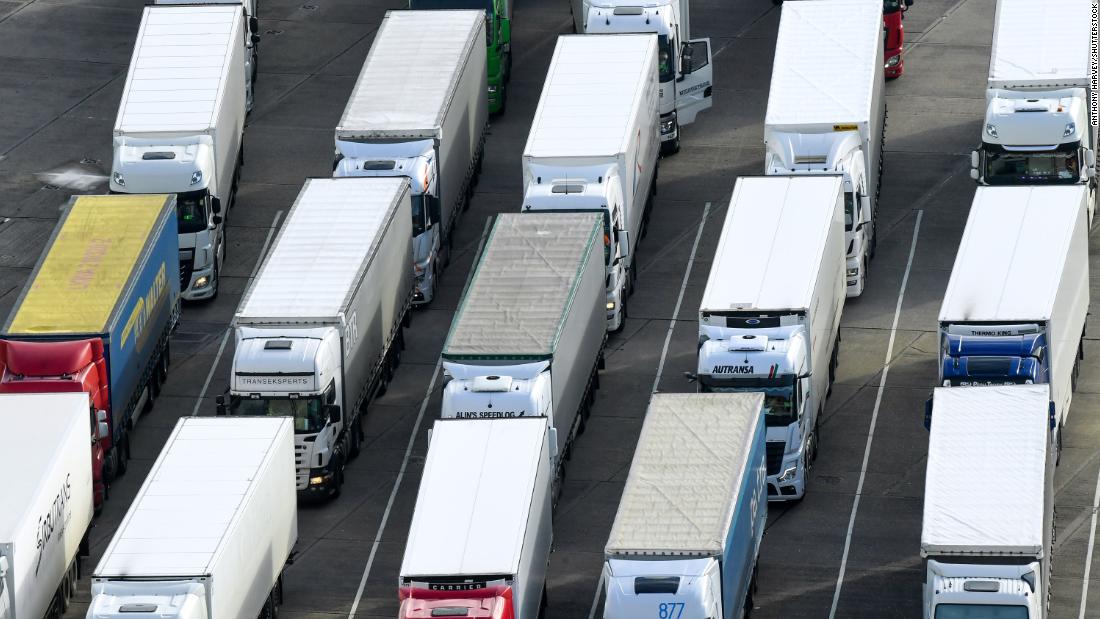 When British Prime Minister Boris Johnson announced his Brexit trade deal on December 24, he said it would enable UK companies "to do even more business" with the European Union.

Britain would be "prosperous and dynamic and contented" after completing its exit from the European Union, Johnson declared, free to strike trade deals around the world while continuing to export seamlessly to the EU market of 450 million consumers.

But it's been 100 days since the United Kingdom split from its single biggest trading partner and Brexit is proving to be disastrous for many British exporters, which have rejected Johnson's description of the issues as "teething problems" and are now asking the government to take urgent action to prevent further losses.

"We are calling on both the UK and EU to get back around the table and produce solutions that reduce trade barriers and give exporters a fighting chance," British Chambers of Commerce co-executive director Hannah Essex said in a statement on Monday.

"The difficulties exporters are facing are not just 'teething problems.' They are structural issues that, if they continue to go unaddressed, could lead to long term, potentially irreversible weakness in the UK export sector," she added.

The deal has been bad for trade. But it's also contributed to recent violence and rising anger in Northern Ireland.

During negotiations on the Brexit deal, the problem of goods moving between Ireland, which is a member of the European Union, and Northern Ireland, which is part of the United Kingdom, proved the most intractable. Honoring the 1998 Good Friday Agreement that ended three decades of sectarian violence meant avoiding the return of a border on the island of Ireland.

Instead, Johnson agreed that Northern Ireland would remain subject to EU market rules and to erect a trade border down the Irish Sea to police them, angering pro-British unionists who object to Northern Ireland being treated differently than the rest of the United Kingdom. Johnson had pledged in 2019 that there would be no checks on goods moving between Britain and Northern Ireland.

Riots and violence in the streets of Belfast this month have stoked fears of a return to Northern Ireland's troubled past and led a spokesperson for the US State Department to warn that the Good Friday Agreement must not "become a casualty of Brexit."

The UK government has not published an assessment of the economic fallout from Brexit, and continues to tout its purported benefits.

A government spokesperson told CNN Business that the Brexit deal "protects high quality jobs and investment right across the UK and ensures that businesses continue to trade effectively and sell to their customers in the European Union."

But a survey of over 1,000 UK business leaders conducted by EY and lobby group London First in late February found that three quarters have experienced disruption to their operating model following the end of the Brexit transition period, and half expect it to continue over the long term.

UK exports to the European Union collapsed 41% in January compared to December, according to the Office for National Statistics, and many companies say that their ability to continue trading with the bloc is at risk due to issues arising from the trade agreement. Businesses that could previously get goods into Europe within hours of an order being placed are now facing lengthy and costly delays due to new customs and food safety checks. 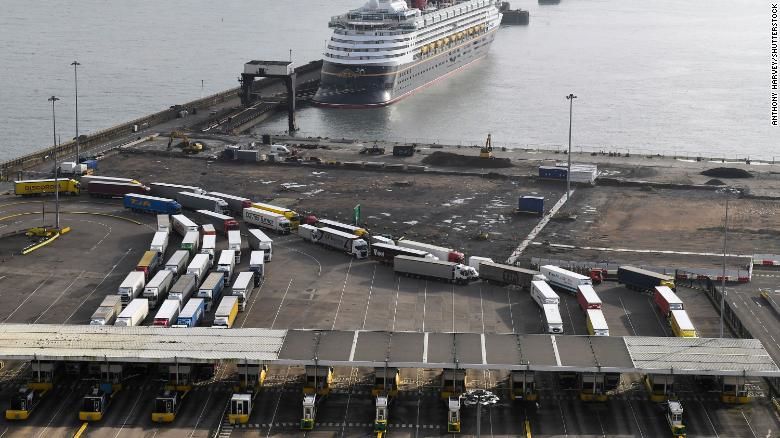 Cargo trucks in Dover heading to the European Union on 5 February 2021.

A British Chambers of Commerce survey published Monday of 2,900 UK exporters found that 41% of firms reported decreased export sales in the first quarter, driven by Brexit and the impact of the coronavirus pandemic.

UK exporters are struggling to adjust to "the sheer volume of paperwork" that they must now tackle, according to Suren Thiru, head of economics at the British Chambers of Commerce.

There is also a lack of clarity around the payment of sales taxes as well as confusion about new rules of origin requirements, with companies reporting very little accessible advice from the UK government on these issues, he told CNN Business. Rules of origin determine where goods, including raw materials and component parts, originate and whether they should face tariffs.

"The fact is, companies trading with the EU did not need to know or understand customs until now. And there isn't enough capacity in the [customs] industry to provide the required support," said Anna Jerzewska, the founder of international trade consultancy Trade & Borders.

While larger companies can absorb new costs, small businesses have been particularly hard hit. A survey of 132 exporters by the Federation of Small Businesses in March found that 23% have temporarily stopped sales to the European Union and five have stopped permanently.

"Smaller traders are struggling, and considering whether exports are worth the effort anymore," the organization's national chairman Mike Cherry said in a statement last month.

Can the deal be fixed?

On Monday, a group of lawmakers, business leaders and economists announced an independent commission to scrutinize Britain's trade deals with Europe and the rest of the world.

The UK Trade and Business Commission, which counts Virgin chairman Peter Norris among its organizers, will make recommendations to government on how to improve these deals.

"We will be looking in detail at the impact of these deals, particularly upon the small businesses that are bearing the brunt of new red tape at our borders," Conservative member of parliament Roger Gale, who sits on the commission, said in a statement. "This is about setting ideology aside and finding a pragmatic, evidence-based way forward," he added.

The situation is particularly urgent for food producers, which have seen exports all but wiped out by the new trading arrangements. As of January 1, all plant and animal products entering the European Union require an export health certificate (EHC) that must be stamped by a government-certified vet.

That has prevented the Cheshire Cheese Company from selling to online shoppers in the European Union because the cost of a certificate is many times its average sales price of £25 ($34) to £50 ($69) per order.

UK food and drink exports collapsed in January, driven by a 76% decline in sales to the European Union compared to the same month last year, according to the Food and Drink Federation. Exports of salmon tumbled 98%, beef slid 92% and animal feed declined 80%. Whisky exports fell 63%.

"The solution is to swallow our pride and strike a veterinary agreement," according to L. Alan Winters, founding director of the UK Trade Policy Observatory at the University of Sussex. "Without it we are going to see little chance of animal products picking up," he added.

There are several other areas that also need attention.

For example, mutual recognition of professional qualifications, such as for doctors, accountants and architects, must still be agreed to on a sector by sector basis. That has not yet happened and it's a "major issue" facing businesses, said Thiru.

Johnson's Brexit deal made no provision for financial services, an industry that accounts for almost 11% of government tax revenue and 1.1 million jobs, according to PwC and the Office for National Statistics.

Prospects for an agreement that would grant Britain the same market access rights as some other non-EU countries look slim, and that could further undermine London's position as Europe's top financial city.

Since the referendum, international financial services firms have migrated almost £1.3 trillion ($1.8 trillion) worth of assets and relocated 7,600 jobs from Britain to the European Union, according to data tracked by EY. Amsterdam has already overtaken London as Europe's top share trading center.

"The days of significant swathes of asset and job relocation announcements appear to have passed and will likely be replaced by the slower yet ongoing movement of people and assets to Europe for compliance purposes," Omar Ali, a financial services managing partner at EY, said in a report last month.

Leaving the EU single market means the end of frictionless trade and higher costs for UK companies, even once they have adjusted to the new way of doing business.

"It's important to recognize that there are some teething troubles, but there are also troubles to come as the long-term consequences of making commerce more difficult come home to roost," said Winters.

That will knock foreign direct investment into the United Kingdom over time because companies wanting to serve the European market will no longer choose to base themselves in Britain, he added.

The new trading relationship is expected to lead to a long-run loss of output in Britain of around 4% compared to remaining in the European Union, according to the UK Office for Budget Responsibility, which produces economic forecasts for the government. Exports and imports will be around 15% lower in the long run.

According to Jerzewska, the trade expert, the main consequence will be the gradual shift of supply chains as EU producers find alternative suppliers. "Businesses follow the path of least resistance and the new barriers to trade can make the UK suppliers less competitive on the EU market," she said.