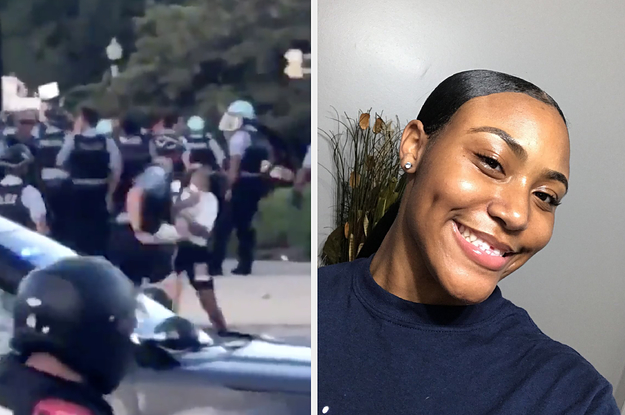 Miracle Boyd said she was already leaving the protest to go home and eat when she saw police beating and macing people. So she started filming them, and that's when an officer punched her.

A Chicago police officer was caught on tape punching an 18-year-old woman in the face, causing her to lose several teeth, during a protest organized by Black and Indigenous youth on Friday night.

The woman, Miracle Boyd, is a member of the Chicago social activist group GoodKids MadCity, which tweeted a video of the incident.

Boyd told BuzzFeed News that she had finished delivering a speech to a group of protesters in Grant Park and was leaving to go home and eat when she heard the loud bangs of fireworks being set off. She headed in the direction of the sound and started recording a livestream on Facebook.

.@chicagosmayor we now have the video of Miracle being sucker punched by CPD! They don’t keep us safe! While they’re attacking a 2020 CPS graduates downtown, children were being shot tonight! A pregnant Womxn was shot & a 14 & 15y/o! You need to #DefundCPD now! pic.twitter.com/gYT4CL5HJ9

Boyd said her mouth hurt "tremendously" after being attacked.

"I felt that my tooth was gone and I felt like I was going fucking crazy," she said, especially because she was already conscious that she had a gap between her two front teeth. "This happened in like five minutes - from me saying I'm leaving to me getting my teeth knocked out."

All she did was shout at them as she recorded, she said, and even then it was an officer she wasn't addressing who assaulted her.

A photo of Boyd that GoodKids MadCity tweeted showed her crying with a bleeding mouth, and some of her teeth missing and broken.

WE ARE SO FUCKING ANGRY!!! OUR MEMBER MIRACLE WAS BEATEN UP BY THE POLICE TONIGHT AND THEY STOLE HER PHONE!!!
.@chicagosmayor A RECENT CPS GRADUATE WAS ATTACKED BY CPD! SHE DIDNT DO ANYTHING WRONG! THIS IS HOW YOU TREAT BLACK GIRLS!?
Justice for Miracle!!!#DefundCPD pic.twitter.com/F8ZONH5ZWi

Boyd said she has been involved in activism for the past three years, from protesting gun violence to advocating for more funding for schools in Black and brown neighborhoods in Chicago.

She graduated from high school last month, and had been offered an internship with state Sen. Robert Peters' office just last week, Peters said in a tweet.

The photo of her after the attack has been widely shared online, and many expressed outrage over what happened.

g they knocked a child’s fucking teeth out. over a STATUE. an INANIMATE OBJECT. CRAFTED AFTER A MURDERER. ON LAND HE STOLE.

Miracle, a 2020 CPS grad, National Honor Society and leader in the community, was not violent, yet was punched in the face by CPD. She lost teeth. This is what they're like in schools too. #Justice4Miracle #CopsOutCPS

I am angered and saddened by actions Chicago Police took last night in response to a protest at the Columbus statue in Grant Park.

I am especially upset by an officer’s attack on Miracle Boyd, a recent Chicago Public Schools graduate and a leader with GoodKids MadCity,

A verified GoFundMe to support the cost of Boyd's medical expenses has raised more than $80,000 so far. Boyd said she's grateful for the help, but she doesn't want the focus to be on her.

"I don't want this to be about me because this is a fight we're all fighting and I'm not doing this alone," she said. "There is seriously things wrong within the Black and brown community that needs to change and I'm going to do everything in power to make sure my people are good."

Witnesses reported that protesters, some of whom were trying to take down the Christopher Columbus statue, were pepper-sprayed and beaten with wooden batons by police. At least a dozen people were arrested, according to NBC Chicago.

There’s not really a good video of everything that happened yesterday cops was pepper spraying like crazy people couldn’t breathe, blood everywhere from folks being crushed on the head by wooden batons.

Folks being arrested, Jumped on and bikes stolen by cops. Over a statue

This was the bloodiest protest I’ve ever been to. People had gushing head wounds and the police just kept charging in and spraying everyone. To protect a statue of a murderer. The connected brutality & logic of Columbus’ colonialism and modern policing were on full display https://t.co/WDWWICkeSH

CPD has beat people at the #DecolonizeZhigaagoong #DefundCPD protest, but folks on the ground have the Columbus statue surrounded. Someone said they saw someone bloodied, & saw one arrest so far. Watch/share livestream at @BLMChi. If you can make it there, please do. https://t.co/zmCXch8FKy

Video also showed protesters being pushed off bikes and thrown to the ground by police.

Chicago police told BuzzFeed News that they have opened an investigation into the incident involving Boyd.

"The Chicago Police Department (CPD) strives to treat all individuals our officers encounter with respect," they said. "We do not tolerate misconduct of any kind and if any wrongdoing is discovered, officers will be held accountable."

The officer has not been publicly identified. The department told CNN that 18 officers were injured after being attacked with rocks and fireworks.

Chicago Mayor Lori Lightfoot said Saturday that she had spoken to the director of the Civilian Office of Police Accountability to address complaints from protesters, and acknowledged "several reports of excessive force by the police" on Friday night.

Lightfoot's office did not immediately respond to a request for comment.