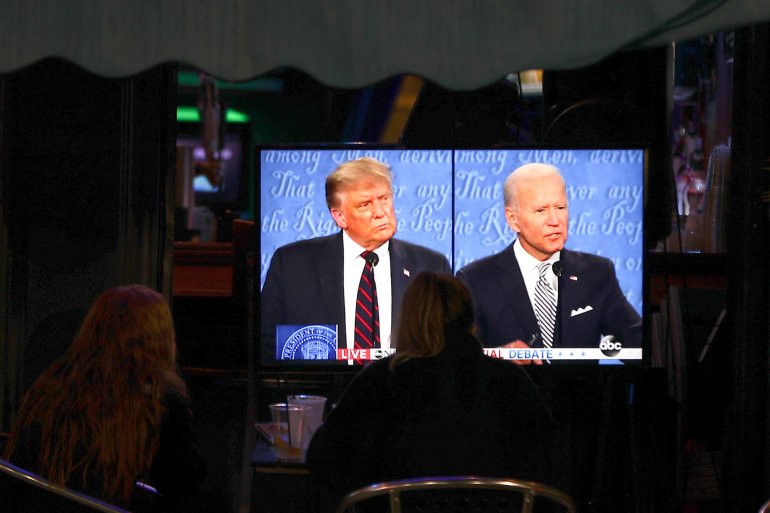 America is cracking up, the first presidential debate proved it

The chaos that ricocheted across television screens last night was testament to the sad spectacle that is America today.
If you did not watch what could only charitably be described as a “debate” between the two US presidential candidates last night, I can assure you that you made a wise decision.

The lunacy on display was the product of the presence of Donald Trump and Donald Trump alone. I am not going to engage in false equivalency and suggest that the Democratic challenger, Joe Biden, was, somehow, equally responsible for the chaos that ricocheted across television screens.

Trump proved, once more, that he is a pitiful excuse for a president. Calmness, thoughtfulness, maturity and rationality are anathema to Trump. Every disgraceful measure of this disgraceful president was on parade for a hellish evening.

Trump shouted obscenities. He lied. He thundered. He deflected. He smirked. He, incredibly, played, again and again, the victim of a fictitious media cabal and an equally fictitious attempted coup d’état.

This at a time when more than 200,000 Americans have died avoidable deaths, falling victim to a COVID-19 outbreak compounded by a near-criminally incompetent president who once insisted that the lethal virus would magically disappear by Easter.

Still, there were two halting moments that stood out – neon bright. First, Trump refused, yet again, to reject or condemn unequivocally white supremacy. Instead, he defended far-right vigilantism.

Second, Trump refused, yet again, to tell his militant supporters to stop hurting and killing Americans for exercising their right to vote or to protest.

Instead, he told his legion of rabid, gun-toting fascist militias to “stand back and stand by”. The overt, unvarnished message was as unmistakable as it was reprehensible: be prepared, on my orders, to intimidate, threaten or harm your fellow citizens – whom I swore to protect and defend – to preserve my interests.

On CNN, the same, largely monochromatic bunch of know-it-all-all-the-time pundits who, prior to the “debate,” hyped the “epic” battle with hyperbole usually reserved for a Super Bowl, almost universally expressed horror at the “s***show” they had just witnessed.

No one was surprised by Trump’s unhinged performance, save the token Republican shill who suggested before the “debate” that it was unlikely Biden could withstand the withering attack that Trump was about to unleash.

Indeed, his chums agreed with him on this score: Trump was going to go after Biden relentlessly and, in effect, bash him like a human pinata. The president was, no doubt, primed to hurl a torrent of personal attacks, insults and epithets and, in so doing, put Biden routinely on the defensive.

Turns out, Trump behaved as expected. They yearned for a “s*** show” and they got one.

But he went too far, too often, the know-it-all-all-the-time pundits said, sadly.

Beyond the grating hypocrisy, the cable news networks trotted out the standard “debate” tropes with exasperating predictability.

An effervescent CNN personality assembled a group of socially-distanced, undecided voters from that notoriously fickle swing-state, Ohio. The gaggle of “I’m still on the fence” gnomes were treated with cloying deference and respect that they should never be afforded by anyone, at any time, for any reason.

As I wrote in an Al Jazeera opinion column earlier this month, if you are an “undecided” voter in the face of Trump’s soul-and-synapse-shattering, nearly four-year-long cavalcade of craziness, perjury, and criminality then, my goodness, you have either been in a self-induced coma or some form of witness-protection programme.

At the time of this writing, Trump has been in office more than 32,000 hours. The effervescent CNN host did not bother to ask the “undecided” gnomes why a one-and-half hour “debate” would help them make up their irresponsible minds when the previous 32,000 hours or more had not done the trick.

Finally, the Trump-Biden debate would be, we were told ad nauseam, a possible “inflection” point that could reframe the presidential election and its outcome.

If, like me, you do not suffer from short-term memory loss, you will remember the latest in a litany of these corporate-media-manufactured “inflection” points was Trump nominating yet another evangelical extremist to the US Supreme Court.

This week, that “inflection” point was replaced by another, unexpected “inflection” point after the New York Times reported on a trove of Trump’s tax returns. The newspaper revealed that Trump has paid little or no federal income taxes for years. Oh well, so long Amy Coney Barrett.

I suspect the shameful travesty that occurred last night will not be a vaunted “inflection” point, either.

Whoever wins, America is cracking up – and that is not debatable.
#Donald Trump  #COVID-19  #Joe Biden  #Covid

Oh ya 226 days ago
Gee i see whoever wrote this BS story does not even have the guts to put their name to it. Why did yoy not show the photos of the wire coming out of bidens left sleeve and the one by his tie. I guess you could not put your name on the story because your head exploded watching biden not answer the questions
View all comments (1)Add comment