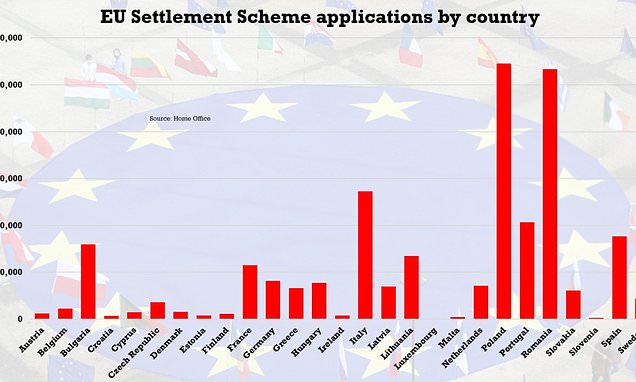 More than 58,000 applications were made to the EU Settlement Scheme in the month after the deadline passed, figures show. There are limited grounds for submitting late.

Almost 60,000 EU citizens missed the deadline to apply to live and work in the UK after Brexit, raising fears over their future in Britain.

More than 58,000 applications were made to the EU Settlement Scheme in the month after the deadline passed, official Home Office figures reveal.

EU citizens and their families were asked to apply to the Home Office by June 30 in order to carry on living and working in the UK after freedom of movement ended following the Brexit transition period.

According to provisional Home Office figures, 58,200 applications were received after the deadline up to the end of July.

While the Government has not set a cut off for making applications, there are limited reasonable grounds for submitting late applications.

They include parents, guardians or councils failing to apply on behalf of a child; those with serious medical conditions preventing them from applying in time; or 'compelling or compassionate reasons' in light of the coronavirus pandemic.

It means that many could face an anxious wait to see if they are able to stay under the terms of the scheme.

More than six million applications (6,015,400) were submitted between the launch of the scheme in March 2019 and the closing date of June 30 2021, and more than five million have already been given permanent or temporary leave to remain.

Poles, Romanians and Italians led the way in terms of applications to stay, with 1,091,500, 1,067,200 and 545,600 applications respectively. They were followed by Portuguese, Spanish and Bulgarian nationals. 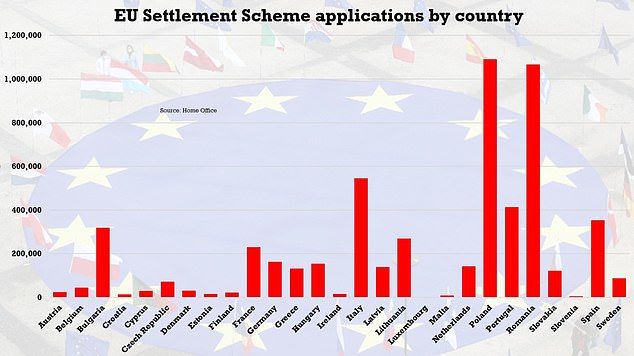 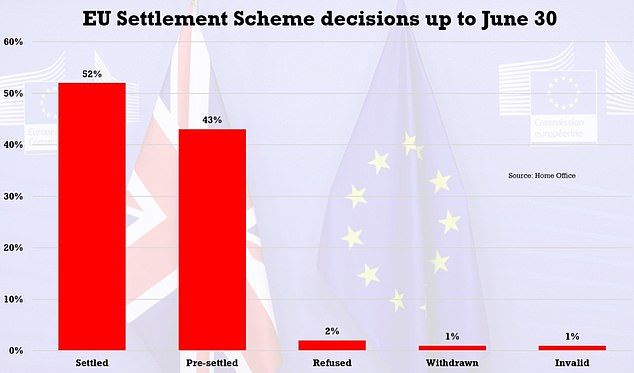 More than 2.8 million of those (2,846,700) were granted settled status, allowing them permanent leave to remain.

A further 2.3 million (2,329,400) were granted pre-settled status, meaning they need to reapply after living in the country for five years to gain permanent residence.

The Home Office said 8 per cent of the applications were from 'repeat applicants' (464,000) - suggesting an estimated 5.5 million people had applied to the scheme before the deadline.

Some 109,400 applications were refused, 80,800 were withdrawn or void, and 79,800 were deemed invalid - where the Home Office decides someone is not eligible to apply or has failed to provide sufficient proof of residence.

The applications received after June 30 will include a mix of late submissions, those from family members, and requests to move from pre-settled to settled status, the Government department said.

It is not known how many people in the UK are eligible for the scheme but could remain in the country undocumented.

Anyone who is yet to apply effectively loses their lawful immigration status after the deadline. This could prevent them getting a new job or moving house until their status is confirmed under the scheme.

Campaigners have previously called for the law to be changed to automatically protect the rights of EU citizens and their families continuing to live in the UK to make sure they do not face discrimination or lose access to services like healthcare.

There are limited reasonable grounds for submitting late applications, including where parents, guardians or councils have failed to apply on behalf of a child; those with serious medical conditions preventing them from applying in time; or 'compelling or compassionate reasons' in light of the coronavirus pandemic.

The Government insisted that those who applied by the deadline but have yet to receive a decision will have their existing rights protected, subject to the outcome of the application and any appeal.

However, those who do not apply and continue to live in the UK without being able to prove their immigration status have been warned they could face enforcement action.