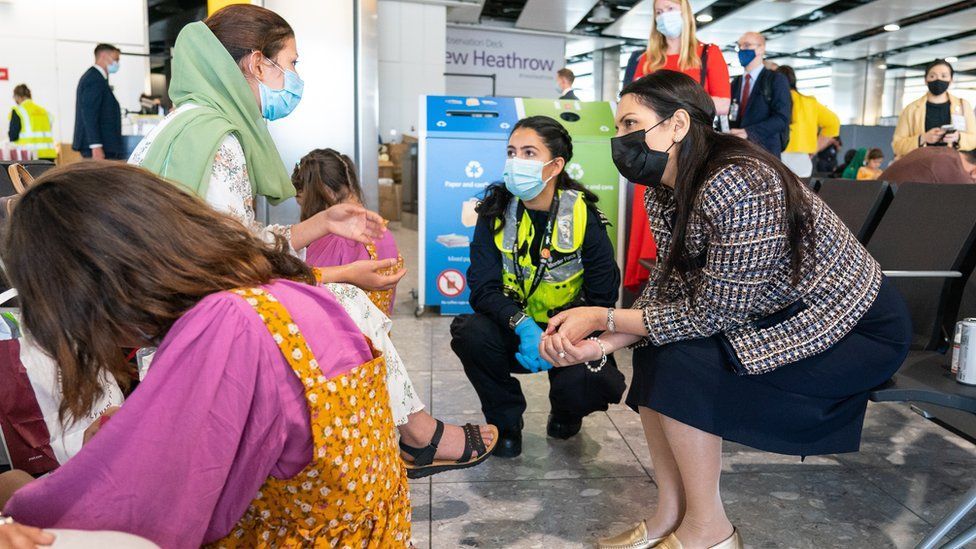 Ministers say 8,000 Afghans who worked with British forces in Afghanistan have come to the UK. Where will they live?

The government is talking to councils about how many could be resettled in their areas and says it wants a fair distribution across the UK.

The Home Office is seeking "firm offers of support" from councils able to show they have a specific home or homes available for an Afghan family.

But many councils no longer own any houses.

Others have decided it would be unfair to offer them to Afghans ahead of local people who are on the housing waiting list.

In those areas, councils are relying on encouraging private landlords to offer suitable accommodation.

For some, that may be easier than others.

But looking further ahead, it is not yet clear what will be required from local authorities to resettle the 20,000 Afghans the government has agreed to relocate over the next five years.

Ashford Borough Council in Kent already had experience of resettling Syrian refugees in a government programme which ran from 2015.

The council's leader Gerry Clarkson said that when the authority saw the situation unfolding in Afghanistan, it knew it could act quickly: "We've got our team already in place to look after the Syrians, we've got a resettlement officer so we sprang into action. We've had a family here for five weeks already."

It intends to take up to 10 families.

In Glasgow, the city council is also asking social housing providers to see if they have any suitable available accommodation.

Walsall Council in the West Midlands has taken in 69 evacuees so far and says it hopes to house up to 120.

Mike Bird, the council leader, told BBC Radio 4's World at One that it hadn't necessarily been easy.

"It's an extremely difficult task. What we have to bear in mind is some of these families coming into the UK have children and obviously those children need to be educated," he said.

"With children going back to school, and the pressure on school places, that in itself is something the government don't seem to be taking into account.

"We've got the whole of the UK that should be considered. If only one [some] councils are coming forward......then the government have got to step in and make sure it does happen."

A BBC analysis of the scheme to resettle Syrian refugees which ran from 2015 until 2021 showed that Scotland, Wales and areas of Northern England took in more people for the size of the population than in many areas in the East and South of England.

In recent years, under a government dispersal scheme, more asylum seekers have also been housed in the North of England, particularly in areas where there is a ready supply of cheaper housing.

A source in local government has suggested that there needs to be clearer data on the impact that other migration schemes are having on areas.

Some councils have decided that they won't resettle any Afghans.

In Norfolk, councils have agreed among themselves that not all authorities would take in Afghans, just three councils in Greater Norwich which they believed were best placed to offer to support new arrivals.

Alan Waters, the leader of Norwich City Council, said there was an Afghan community already in the Greater Norwich area and that it was closer to the facilities and services that people would need

"Wonderful as Norfolk countryside is, actually there are some rather remote parts and that will leave people feeling isolated."

A spokesperson for Norfolk County Council said: "It's about making sure Afghans come to places where there is the right infrastructure for them, for example is there a halal butcher nearby or a mosque?

"We are not talking about temporary accommodation. We want to help them build a home and set up a new life."