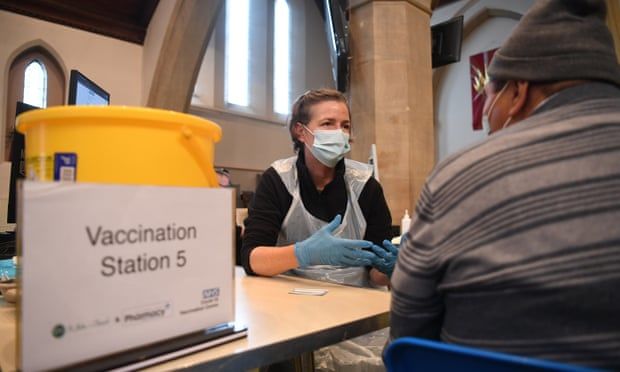 UK ministers have been warned they cannot wait for new research on the Omicron variant and must act now to prevent a potentially “very significant wave of infections” that risks overwhelming the NHS.

A 75 further cases of the variant have been identified in England, the UK Health Security Agency (UKHSA) said on Friday night, bringing the total number of UK confirmed cases to 134. The head of the agency, Dr Jenny Harries, said: “We have started to see cases where there are no links to travel, suggesting that we have a small amount of community transmission.”

The Guardian understands the government has been privately urged by some of its own scientific advisers to tell people to work from home until Christmas if they can, when more will be known about the dangers posed by the new variant.

Growing concern about the spread of the variant was reflected at the latest meeting of the Sage committee, details of which were released on Friday. The minutes show experts saying there is no time to wait for more data on the Omicron variant. “Even if measures are introduced immediately, there may not be time to fully ascertain whether they are sufficient before decisions are needed on further action,” the documents say.

“The situation could develop quickly over the coming weeks and decision-makers may need to act while there is still a high level of uncertainty including considering the potential need for stringent response measures.”

However, on Friday, during a visit to Oswestry in Shropshire before an upcoming byelection, Boris Johnson said that Christmas this year should go ahead as “normally as possible” and reiterated that people did not need to cancel plans for parties and nativity plays.

Sage’s warning came as ministers gave GPs in England the green light to provide less care to millions of patients for the next four months so they can join the “national mission” to urgently deliver Covid booster jabs.

Family doctors will spend less time monitoring people with conditions such as diabetes and heart problems, do fewer health checks on the over-75s and stop performing minor surgery until April.

A Department of Health and Social Care (DHSC) source made clear the government sees the accelerated vaccination campaign, combined with border measures, as its main weapons against Omicron. “Stepping up the boosters is the key thing: buy as much time as we can with the measures at the border to slow the incursion, and then make good use of that time to understand the variant.” 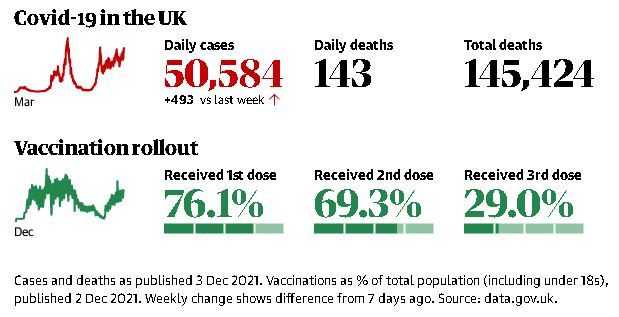 Ministers are keeping Covid measures under constant review, but it is understood fresh restrictions at the border – such as adding more countries to the red list – are considered more likely than domestic changes such as the reimposition of working from home guidance.

The Sage experts praised scientists in South Africa for swiftly identifying and sharing details of the highly mutated Omicron variant in November, a move that prompted a string of travel bans and a global research effort to understand how dangerous the variant may be.

According to the minutes, it is “highly likely” Omicron will escape immunity to some extent, given the large number of reinfections already seen in South Africa, and a raft of mutations that affect every known site that neutralising antibodies bind to.

The scientists expect protection against infection to be hit harder than protection against severe disease. But even if vaccines hold up well against severe illness, any significant drop in the prevention of infection could drive a “very large wave” of disease that requires “very stringent response measures to avoid unsustainable pressure on the NHS”, the experts say.

“It is important to be prepared for a potentially very significant wave of infections with associated hospitalisations now, ahead of data being available,” the minutes add.

The warning comes as the latest figures from the Office for National Statistics (ONS) reveal that infection levels have risen in the UK, echoing trends seen in recent daily case numbers. The ONS survey, which is based on swabs collected from randomly selected households, found in the week ending 27 November an estimated 1.65% of the population in England had a Covid infection, equating to about one in 60 people. In Northern Ireland and Wales, the rate stands at one in 45, and at one in 65 in Scotland. The figures represent a rise in all nations except Wales, where the trend was uncertain. None of the cases were confirmed as Omicron, which was first reported to the World Health Organization (WHO) on 24 November.

Adam Finn, a professor of paediatrics at the University of Bristol and a member of the Joint Committee on Vaccination and Immunisation (JCVI), urged people to work from home where possible until more was known about the risk Omicron posed. The European Centre for Disease Prevention and Control believes the variant could become dominant on the continent within months.

“The honest truth is that the booster programme, which I think will work, is not going to work soon enough if there is a big wave here soon,” said Finn. “It takes time to get them into people and it takes time for them to make an immune response.”

“We need to buy time. If in three weeks it’s died out, then fine, we can all relax, but right now is the time when you could prevent there being a big wave,” he added. “The more people can work from home now the better, until we are more definite about what’s going to happen.” Sage scientists estimate that more than a third of people’s contacts occur in the workplace and that home working can have a significant impact on transmission.

Prof Anthony Harnden, the deputy chair of the JCVI, said while boosters would give the majority of people their best chance of fighting Omicron, there remained a small proportion, but large numbers, of unvaccinated adults who would be “at very high risk” if Omicron proved to be highly transmissible. “We should explore every measure to reach out to these unvaccinated adults,” he said.

No 10 on Friday ruled out making vaccines compulsory, as has happened in Austria and is being considered in Germany. A spokesperson for the prime minister told reporters: “We’ve set out our policy on this and we’ve said it’s not something that we would look to introduce. You’re aware of the changes we made in terms of social care settings and for NHS workers, given the importance of protecting the most vulnerable in our society. But there’s no plans above and beyond that in that regard.”

Finn believes mandatory vaccination of the general public could cause more harm than good in the UK, but favours an approach used in South Africa, where trusted individuals go door-to-door to talk through people’s concerns about having a Covid jab. “They are literally going to people’s houses and talking to them, one by one, and I think that’s what you’ve got to do, and it has to be the right person doing it,” he said. “We know who’s not had the shots and you can have a real impact if you get the communication right.”