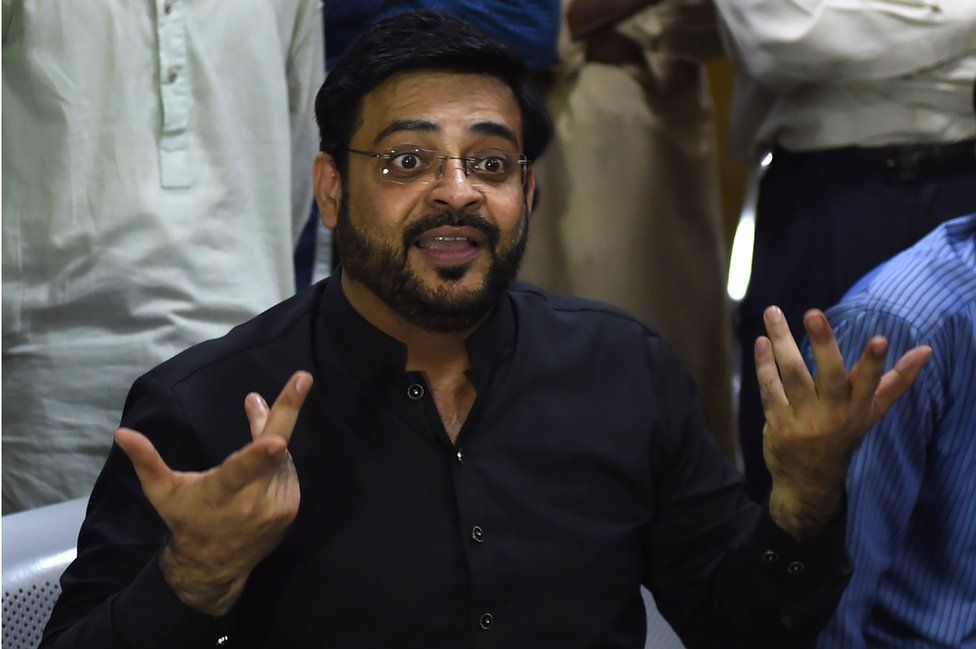 One of Pakistan's most prominent and contentious TV hosts, Aamir Liaquat Hussain, has died aged 50 after being found unconscious at home in Karachi.

The anchor was taken to hospital but pronounced dead on arrival. A post mortem exam is being carried out.

His career was dogged by controversy - he gave babies to childless couples on TV and was banned for hate speech.

The outspoken anchor's personal life was public fodder too, often fuelled by his activities on social media.

In the last chapter of his life, he married for a third time but it ended publicly and acrimoniously within months. His 18-year-old bride Dania Shah filed for divorce in May, accusing him of domestic abuse and being a drug addict.

Hussain released a video calling the marriage a "fiasco" and dismissing the allegations as fake news - but he also referred to being depressed by the things said about him on social media after all he had done for Pakistan and vowed to leave the country. 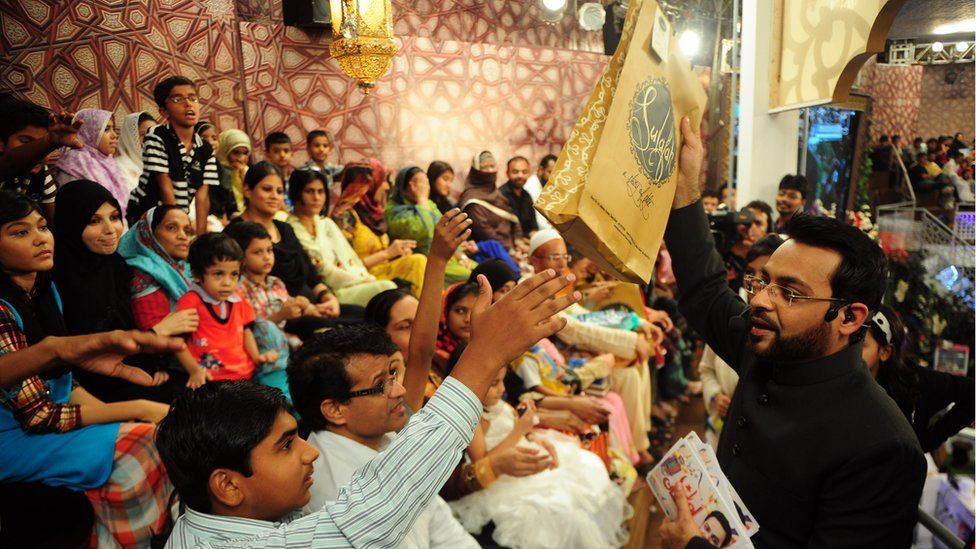 Aamir Liaquat Hussain was known for his TV giveaways

Aamir Liaquat Hussain, who worked for many of Pakistan's leading media houses over his career, was undoubtedly popular with a section of the population but many others found him highly divisive.

An eloquent speaker and a great showman who guaranteed ratings, his broadcasts were well scripted, and included religious sermons - as well as frequent abuse.

There were regular complaints from those whom the televangelist named and shamed on his shows. He would accuse people of acts such as blasphemy, treachery or fornication.

In September 2008, he dedicated an entire programme to exploring the beliefs of the Ahmadis, a sect who identify themselves as Muslim and follow the teachings of the Koran but are regarded by orthodox Muslims as heretical.

In it, two scholars said that anyone who associated with false prophets was "worthy of murder". Within 24 hours of the broadcast, a prominent member of the Ahmadi community was shot dead in the small town of Mirpur Khas in Sindh province.

The outspoken anchor will also be remembered for sexist remarks about liberal women in Pakistan - often artists, authors or human rights activists.

Quiz shows and product giveaways - cars, motorbikes and household electronics - were a big feature of his shows, and in 2013, even abandoned babies.

He insisted at the time that the move was aimed at giving infants a chance of a better life and was not simply an attempt to boost his ratings.

"We were already top of the ratings before we gave away a baby. We took these children from the garbage, from the trash, and delivered them to the needy people," Hussain said on his website, where he described himself as "truly a legend".

Symbol of hypocrisy and division

Aamir Liaquat Hussain was a truly larger-than-life figure who dominated the public consciousness here for two decades - both as an entertainment icon and the definitive symbol of modern Pakistani society's hypocrisy and divisions.

He found himself in the right place at the right time, at the intersection of religion, politics and showbiz. The televangelist was a game show host, a politician, an aspiring actor, a model and a brand ambassador. He also had his own clothing label.

His antics on his game shows evoked admiration and disgust in equal measure. He'd hand out prizes but was equally at ease delivering religious fatwas and issuing sometimes inciteful, sometimes false statements against journalists and others. Expletive-laden monologues were mixed with sermons on Islamic values on his programme on Geo TV, arguably the most popular religious show in Pakistan's TV history.

News of his death spread like wildfire - besides initial shock, the reaction was as divided as it had been to him while he was alive. Alongside condolences from political leaders, there was an outpouring of grief from thousands of his followers. But many Pakistanis aren't ready to refrain from speaking ill of the dead, and reminded others of his controversial statements and lurid past.

The TV host was a member of parliament from 2002 until 2008, when he was expelled by the MQM party. He served as the minister of state for religious affairs from 2004 to 2007 under then president Pervez Musharraf.

As a politician, he was involved in several rows. On one occasion, he was held hostage by students angry at his work criticising suicide bombings.

On another occasion, he declared British-Indian novelist Salman Rushdi as "worthy of death" - comments that eventually forced him to resign from parliament.

In 2018 he turned back to politics again, joining the Pakistan Tehrik-e-Insaf (PTI) party and became a member of the National Assembly again the following year.