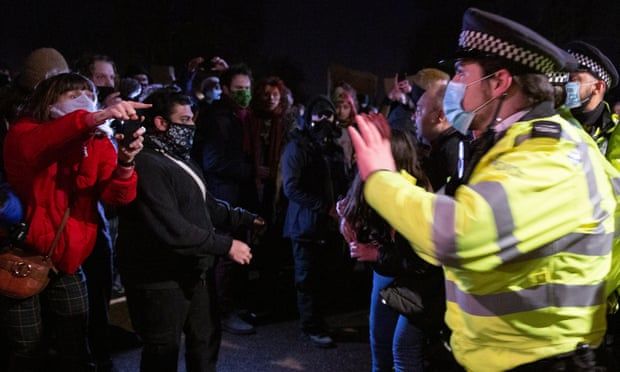 Organisers from Reclaim These Streets, which cancelled a planned short, socially distanced vigil after police said they could be fined tens of thousands of pounds, said the report had failed to investigate how the cancellation of the event had led to more anger and the greater likelihood of public disorder.

The home secretary, Priti Patel, ordered the report after widespread anger at images of officers pinning women to the floor at the vigil in Clapham Common, south London, on Saturday 13 March.

The report from Her Majesty’s Inspectorate of Constabulary and Fire & Rescue Services (HMICFRS) published on Tuesday concluded that officers had acted “appropriately”, stating they “did their best to peacefully disperse the crowd; police officers remained calm and professional when subjected to abuse; and police officers did not act inappropriately or in a heavy-handed manner”.

But Jessica Leigh, one of the original vigil’s organisers said policing of the event had further eroded women’s confidence in the police.

“There is no attempt in this report to address the issue that women now have less trust in the police than they did before the vigil,” she said. “It is a missed opportunity to recognise the damage done by the police’s decision to push for the event to be cancelled, and exacerbated by their actions while policing the event.”

She accused the report of framing organisers as “silly little girls who didn’t know how to organise an event”, despite the fact that two were elected councillors with experience of event organisation.

Estelle du Boulay, the director of Rights of Women, said she was “appalled by the scenes of police brutality” at the Clapham vigil.

She pointed to the report’s finding that there “was a degree of confusion as to the correct legal position”, saying this revealed an apparent lack of understanding of human rights obligations.

“How the review can therefore conclude that the police acted “appropriately” raises serious questions around the credibility of the review,” she said. “It’s conclusion will do nothing to improve women’s confidence in policing and will further deepen the widespread distrust in accountability mechanisms in relation to the police.

Reclaim These Streets said local police had initially been willing to work together when they proposed a peaceful and short vigil, but then said they had to ban the event because of coronavirus restrictions. The group took the police to the high court for an emergency hearing, but after their challenge failed they cancelled the event citing the police’s “lack of constructive engagement”.

Many chose to attend the event despite police warnings. As night fell police began forcibly removing protesters and there was further anger as some officers were seen trampling on flowers that had been left on Clapham Common bandstand.

One attendee said the report did not reflect her experience. “The police were really very aggressively asking people to leave and telling them they would be arrested if they didn’t. It really wasn’t a polite chat,” said Becky Gardiner, a lecturer at Goldsmiths, University of London.

Mandu Reid, the leader of the Women’s Equality party said: “This exoneration of the police only adds fuel to claims that the force has a huge problem with institutional misogyny and sexism and that officers can and will act with impunity.”

Jess Southgate, the chief executive of Agenda, the alliance for women and girls at risk called for police to be trained to recognise and respond to victims of trauma, rather than “retraumatising them through arrests”.
#Priti Patel  #Coronavirus
Add Comment