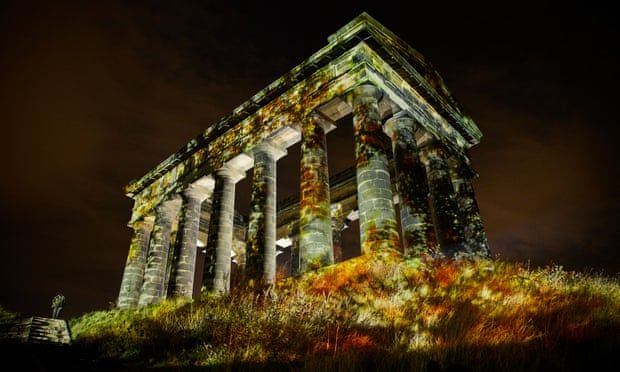 ‘A chariot in the sky’: Lumiere festival of light in Durham honours Covid dead

One of the most peculiar monuments in the UK is about to get a little stranger when it is spectacularly lit up to be seen from as far as 20 miles away and accompanied by a blasting soundtrack including music by the 12th century mystic Hildegard of Bingen.

Penshaw Monument is a 20-metre replica of the ancient Greek temple of Hephaestus built by the Victorians on a hill near Sunderland.

It was intended to commemorate John Lambton, the first earl of Durham, a Whig politician whose nickname was Radical Jack. This weekend it elegantly commemorates the victims of Covid-19 as part of Lumiere in Durham, the UK’s largest light festival.

The work, A Telling of Light, is by artists Elaine Buckholtz and Ian Winters and is a huge technical challenge involving about 140,000 separate points of light, in tribute to the UK death toll from coronavirus. 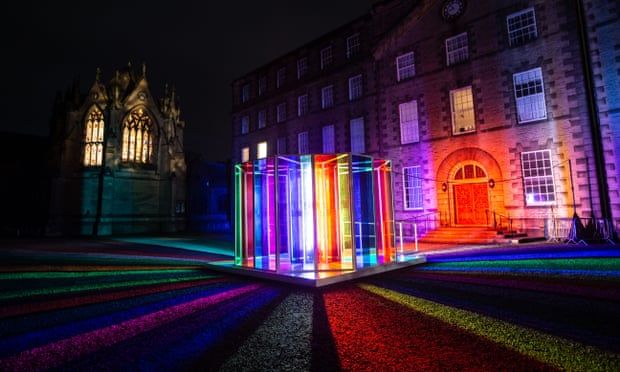 Hymn To The Big Wheel by Liz West at Ushaw Historic House.

The light show is accompanied by monastic music watched from a field near to the monument, a National Trust property on the border of County Durham.

The soundtrack includes music written by Hildegard, considered one of the first identifiable composers in the history of western music who spent most of her life in a hilltop monastery in the Rhineland.

Buckholtz said they were offering visitors a place to mourn but also to be inspired. “Sometimes it looks like a chariot in the sky. It feels like it’s not reachable, but it’s there. For me it speaks to the relationship between life and death.”

She said the intention had been to create a sublime, communal experience. “No one has been able to mourn together. Everyone has been separate. A lot of people haven’t even had a funeral so we wanted to create a place for people to be together and honour their losses.”

Lumiere has been staged in Durham every two years since 2009. It returns on Thursday with 37 works including, for the first time, six dotted across the county.

One is Penshaw. Others include Solitude by Finnish artist Kari Kola at Finchale Priory, a place which was essentially a holiday retreat for the medieval monks of Durham. In Seaham marina car park Tim Etchells will delight or infuriate onlookers with a large LED text sculpture that reads “GO WITH THE FLOW/SWIM AGAINST THE TIDE”. 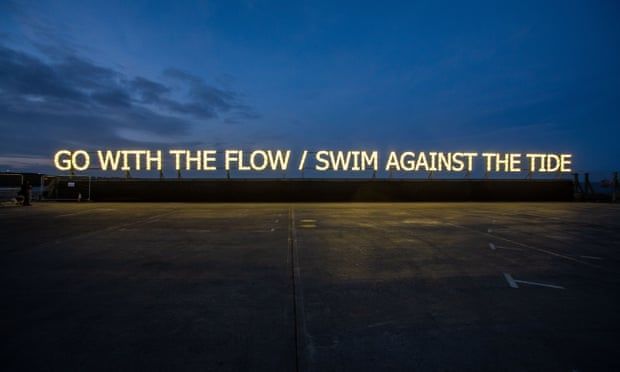 With Against by Tim Etchells at Seaham Marina.

The festival is enormously popular even if it is a huge logistical challenge for organisers and organisations in Durham itself. Pedestrians without a ticket will not be able to get in to the centre and everywhere there are signs telling motorists to expect delays.

This year there has been divine help with Durham Cathedral moving its evensong to an earlier time to accommodate a vast, beautiful Mexican Day of the Dead-inspired work projected on to its facade.

Elsewhere, visitors to the city who need a free ticket – all 160,000 of which were snapped up straight away – might see small pairs of illuminated magpies (two for joy) dotted around the city on lamp-posts and signs; or a disconcerting cluster of enormous hinged desk lamps on the waterside at Framwellgate.

“Everyone who looks at them says: ‘I want one,’” said Helen Marriage, director of Artichoke, which puts on Lumiere.

Marriage said Lumiere succeeded in exhibiting challenging work to audiences who might not automatically think of going to a gallery. “The community does feel like they own it. If we were to say we’re not doing it any more I think it would be like saying Christmas isn’t coming any more. People expect it now.” 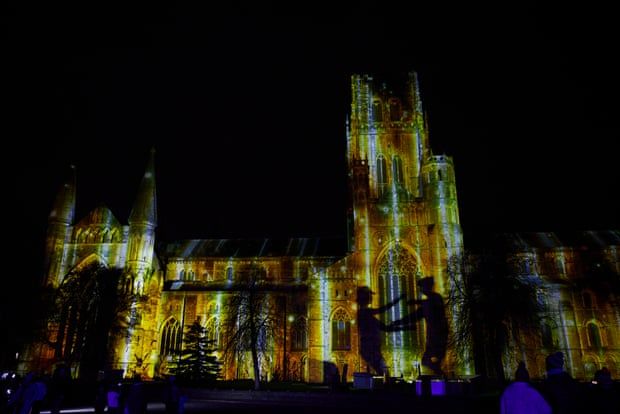 “In our hearts blind hope” by artist Palma Studios, projected onto the facade of Durham Cathedral. The projected piece is inspired by Dia de los Muertos, the Mexican day of the dead, gathering to remember family members and friends who have died.

Increased security measures have been introduced including bag searches, armed police and steel barriers. The UK terror alert level has been lifted to “severe” after the explosion outside a hospital in Liverpool.

The festival costs about £3m but the economic boost to the region is huge. It will also help County Durham’s bid to be the UK city of culture in 2025.

Marriage said that at times it felt like a wonderful social experiment. “Can you take a city and put art into its daily life? One thing I’m preoccupied by is who owns public space? Is it only ever for shopping and work and traffic. My contention is that we can do so much more with it and we can bring people together.”

Marriage said the lockdowns and everything moving online over the last year had made her worry it might be the death of Lumiere. “Actually I think the reverse is true. People are so desperate for real experiences … I think there will be a resurgence in things people do together.”