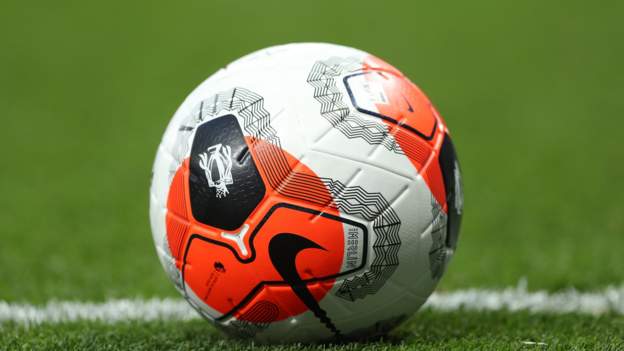 Forty-two Premier League players and staff tested positive for Covid-19 in the past week - the most recorded in the league over a seven-day period.

It is the highest number since 40 cases were reported in January.

Previously, the most positive tests returned in a week this season was 16 from 16-22 August, when there were 3,060 tests.

On Thursday, following the introduction of new coronavirus rules in England, the Premier League told clubs to return to emergency measures, including social distancing and wearing masks.

A league statement on Monday said the frequency of lateral flow and PCR tests for players and staff would increase.

The statement added: "We will continue to work closely with the government, local authorities and supporter groups, while being responsive to any future changes to national or local guidance."

From Wednesday, fans will need to show proof of double vaccination or a negative test to attend sporting events with crowds of more than 10,000 people in England. This includes Premier League games.

Tottenham's Europa Conference League match against Rennes was called off on Thursday because of the outbreak that resulted in the Brighton postponement.

Also on Thursday, a number of Leicester players did not travel to Italy for their Europa League group game against Napoli because of positive Covid-19 tests.

Late on Monday, the Premier League confirmed United's game at Brentford was postponed after the Old Trafford club expressed safety concerns following the closure of their training ground for 24 hours to reduce the risk of transmission.

Aston Villa boss Steven Gerrard confirmed "a couple of staff members and a couple of players" have tested positive but insisted the "vast majority" were negative.

He said Tuesday's game against Norwich is not in doubt and Canaries boss Dean Smith said one of his players was isolating but the rest of the squad had tested negative on Sunday.

In the Championship, Sheffield United's match against QPR on Monday is off because of an outbreak in the QPR squad.

What are Premier League managers saying about Covid-19?

Before the postponement, Brentford boss Thomas Frank echoed Arsenal's Mikel Arteta in calling for greater clarity from the Premier League over fixture changes because of Covid-19.

Manchester City manager Pep Guardiola said he encourages his players to get a vaccine booster, adding: "We speak with the players every day to say be careful. Stay healthy, wear masks, social distance."

Conversely, Burnley manager Sean Dyche revealed that he does not "preach to the players" on vaccines, but Norwich's Smith described the Canaries as "highly vaccinated".

Dyche added: "We certainly have players who don't have the full vaccination. Everyone has a choice, personally I have all three as I think it's right to do so."

What are the rules for fans at Premier League games?

The government's introduction of 'Plan B' on Wednesday to fight the spread of the Omicron variant means it will be mandatory for fans to show proof of double vaccination or a negative test to attend sporting events with crowds of more than 10,000 people in England.

Premier League clubs have conducted spot checks on fans so far this season, with Brighton, Chelsea and Tottenham among those to make Covid passes mandatory.

Brighton play Wolves in the Premier League on Wednesday and Seagulls chief executive Paul Barber said he hoped that, as long as fans followed new measures, there would be no return of restrictions on numbers attending games.

Barber said Brighton supporters would have to complete a pre-match online declaration and "ideally" wear masks inside the stadium.

"It seems a small price to pay for keeping each other safe, protecting the NHS and hopefully keeping the stadium open with a full capacity," Barber added.

"The government do expect us to carry out more random checking than what we've previously done so there is every chance it will take longer to get in."