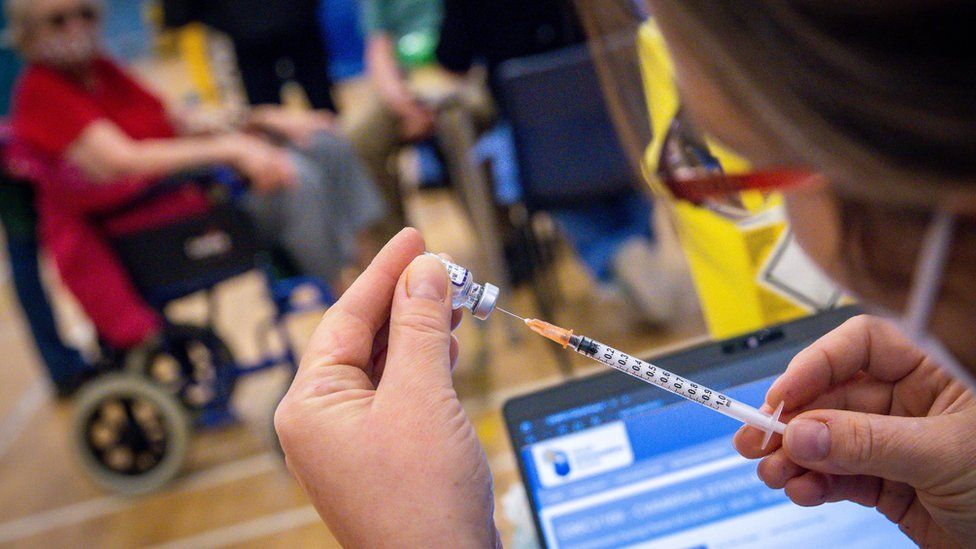 The UK Health Security Agency has confirmed cases in Chelmsford, Essex, and in Nottingham.

Humza Yousaf said it was a "stark reminder that we must not drop our guard".

He said the Scottish government would do "everything we can to minimise the risk of spreading infection".

First Minister Nicola Sturgeon tweeted that "we all have a part to play in beating this new threat".

UK Health Secretary Sajid Javid said earlier the cases were linked to travel in southern Africa and they and their households were self-isolating while more tests and contact tracing took place.

Following a meeting with Mr Javid and the other devolved administrations, Mr Yousaf said Scotland had agreed to align with new UK travel restrictions.

Fully vaccinated arrivals will need to take a PCR test within two days and to self-isolate until a negative result is received.

"No cases have yet been detected in Scotland, but the fact this new variant is on our doorstep is clearly a worry and we should act as though it is already here," he said.

Four more African countries - Angola, Mozambique, Zambia and Malawi - will be added to Scotland's red list of high risk countries from 04:00 on Sunday.

The new Omicron variant was first reported to the World Health Organization from South Africa on Wednesday and has also been identified in Botswana, Belgium, Hong Kong and Israel.

It has been described as highly mutated, and there is preliminary evidence it increases the chances of reinfection, although a fuller understanding of its risks could take several weeks.

Countries around the world are introducing travel bans and restrictions on southern African countries in an effort to contain Omicron's spread.

All people arriving in Scotland who have visited a red list country in the previous 10 days must now go into managed quarantine and take two PCR tests during their isolation.

All contacts of suspected Omicron cases must self-isolate for 10 days, regardless of their vaccination status.

"We're concerned, of course we are," Mr Yousaf told BBC Scotland. "But we shouldn't panic. It's right to take precautionary measures.

"If there's one thing for certain we know about the virus is you have to act quickly, decisively, in the face of a new variant, so that's what we're doing, but we're working with other global partners to learn as much as we possibly can.

"We are accelerating our booster campaign because we know just how effective the vaccine is against the dominant strain [Delta]."

Mr Yousaf said people in Scotland had "been amazing in doing everything possible to get cases down, to protect ourselves, each other and the NHS, and in taking up the offer of a vaccine".

He said: "We must now redouble our efforts to follow the basic rules that have served us well so far in the pandemic - wear a face covering on public transport and in all indoor settings for food and retail; open windows especially if you have people visiting at home; keep washing your hands regularly and thoroughly.

"Work from home where possible, take regular lateral flow tests and behave sensibly. If you have symptoms, self-isolate and take a test."

He also urged people to get vaccinated and for those over 40 to book a booster jab six months after their second dose.

Prime Minister Boris Johnson told a news briefing the UK government would make masks mandatory in shops and on public transport in England.

There will be no change to rules on face coverings in Scotland, where masks have continued to be required in indoor public settings.