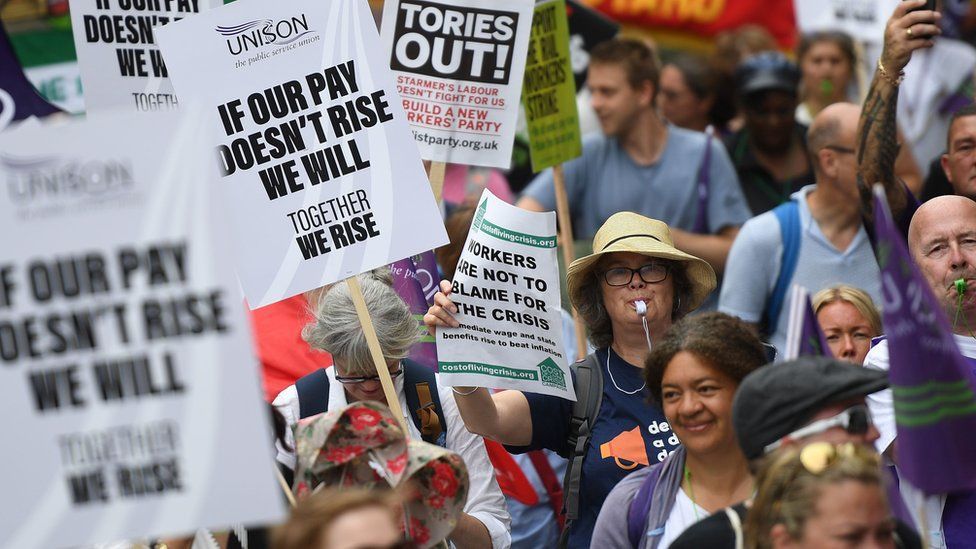 Workers take to London's streets amid cost of living crisis

Thousands of protesters have taken to the streets of London to demand action from the government on the cost of living crisis.

Workers marched to Parliament to call for better pay and conditions as part of the event organised by the Trades Union Congress (TUC).

The union has called for a "decent pay rise for public sector workers" and a £15 minimum wage.

A Treasury spokesman said it had "stepped in to ease the burden".

The spokesman added that the government was "helping eight million of the most vulnerable British families through at least £1,200 of direct payments this year - and giving every household £400 to help pay their energy bills".

Protesters set off from Portland Place and headed towards Parliament Square at about 12:00 BST as part of the We Demand Better march.

The TUC said its research suggested workers have lost almost £20,000 since 2008 because pay has not kept pace with inflation.

"We want government to listen - workers are not the cause of inflation, they are suffering the impact of inflation," she said.

Ben Robinson, 25, who works for a housing charity in Brixton, south London, was at the protest.

He said some residents faced a choice "between feeding their own kids, not themselves, their own kids, and paying rent and heating, and that is just not a choice that anyone should have to face". 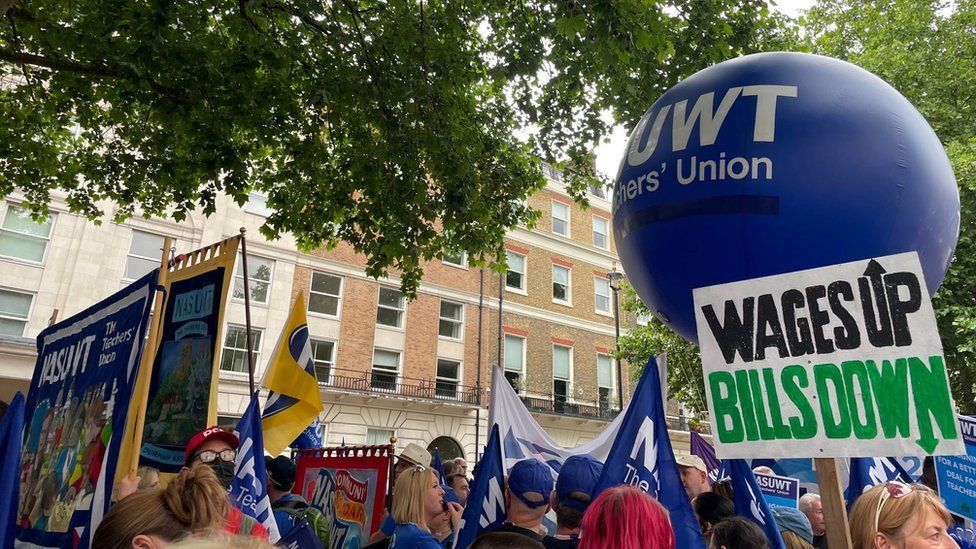 Members of NASUWT, the Teachers' Union, were among those who attended the march and called for the profession to receive a "pay uplift and an urgent rebalancing of workload".

The union said that with living expenses surging ahead of wages, the value of teachers' pay had fallen by 19% over the last 12 years.

Teacher Stephen Brown said he was attending the march because many of those in his profession were now leaving - piling on the pressure for those who stay in classrooms.

"We've had a pay freeze for the past few years... teachers are leaving the profession because they are struggling so much, they just think it's not worth it," he said.

The Department for Education (DfE) said it was "incredibly grateful for the continued efforts of teachers and school leaders in supporting pupils" and work was ongoing to "deliver pay increases and pay awards for new and experienced teachers".

A Treasury spokesman added: "As part of our £37bn support package we're also saving the typical employee over £330 a year through the imminent National Insurance tax cut, are allowing universal credit claimants to keep £1,000 more of what they earn and have made the biggest cut to all fuel duty rates ever."