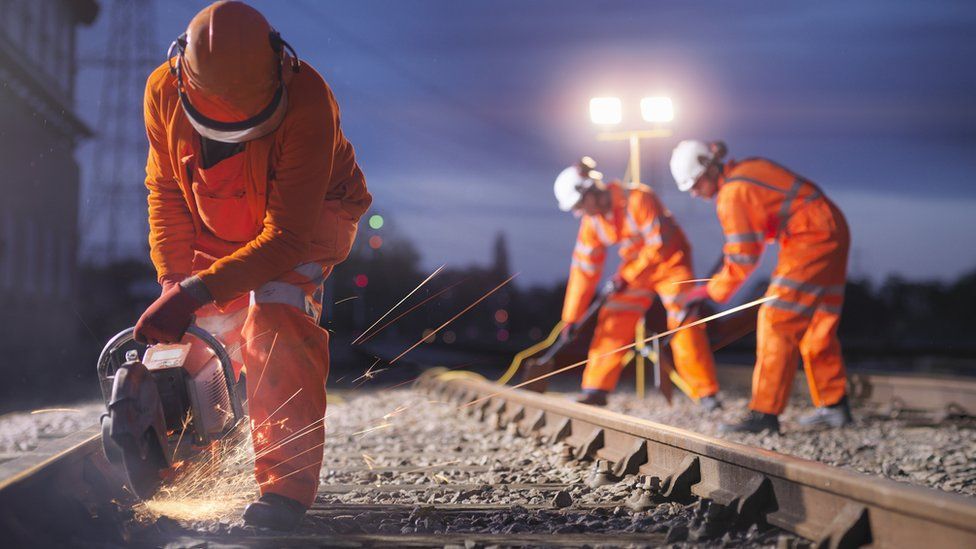 Will there be a national rail strike?

Contingency plans are being worked on to keep some passenger and freight services running if railway unions launch summer strike action.

A strike ballot of 40,000 members of the National Union of Rail, Maritime and Transport Workers (RMT) closes on Tuesday.

Those being balloted work for 15 train operating companies and Network Rail.

The union has claimed a national rail strike could be the biggest "in modern history" and bring the country "to a standstill".

It comes as the RMT announced it intends to ballot members in Scotland for strike action, following what it describes as a "derisory" 2.2% pay offer by ScotRail.

The network is already being hit by a driver shortage resulting from a pay dispute between ScotRail and the Aslef union. A temporary timetable is to be introduced next week, when weekday services will be cut by a third.

What impact would a strike have?

The ballot results are likely to be known on Wednesday.

But we might not know immediately what will happen next, and whether any strike would cover the whole country.

Dates are unlikely to be confirmed on the day, although it's possible action could begin as soon as late June.

A nationwide strike involving people who work for the 15 train companies, in roles such as guards, and for Network Rail, which maintains the railway and carries out vital functions including signalling, would cause significant disruption.

One rail industry source estimated only about 20% of passenger services could run on affected days. Another pointed out it could vary between operators, depending on the staffing model they used.

But the unusual factor in this situation is the involvement of Network Rail. Its workers have not taken part in a national strike since 1994.

If signallers walked out, that would affect both passenger services and the movement of goods by train, including bulk consignments of fuel, and some food.

Rail makes up a relatively small proportion of all freight, but this has been increasing because of the lorry driver shortage, and environmental considerations.

During a strike, the system could handle a much smaller number of trains. An industry source said key signalling centres could be manned by managers and supervisors. But they could not cover the same shift patterns - for example, at night, when a lot of freight trains would usually run.

Potential problems could include disruption to supplies of material to a small number of power stations, and containers piling up at some ports which have rail links.

The government and businesses are working on plans to deal with this scenario.

Not all products could be transported by road instead, so a system of prioritisation would be needed.

Why is the ballot happening?

The RMT union says it's over pay, conditions and planned job cuts.

It says members working for train companies have been subject to "pay freezes, threats to jobs and attacks on their terms and conditions".

Network Rail plans to shed 2,500 maintenance jobs as it tries to make £2bn of savings over the next two years.

The RMT's General Secretary Mick Lynch says the jobs are safety critical, and cutting them will make accidents more likely.

Network Rail has said it would not consider any changes that would make the railways less safe. It argues modernisation is needed, making rotas more flexible and teams more multi-skilled. The track operator also said it was "disappointed" the union had launched its strike ballot, adding that it hadn't yet tabled any firm proposals.

The clash between unions and those running the railways comes as the industry is under pressure to cut costs, following the catastrophic financial impact of the pandemic.

The government poured in £16bn of taxpayers' money to keep services running as passenger numbers plummeted, at one point reaching a 150-year low.

Now, more working from home means different transport use patterns, especially for commuters. Weekday rail usage has only recovered to about three quarters of what it was before Covid arrived. 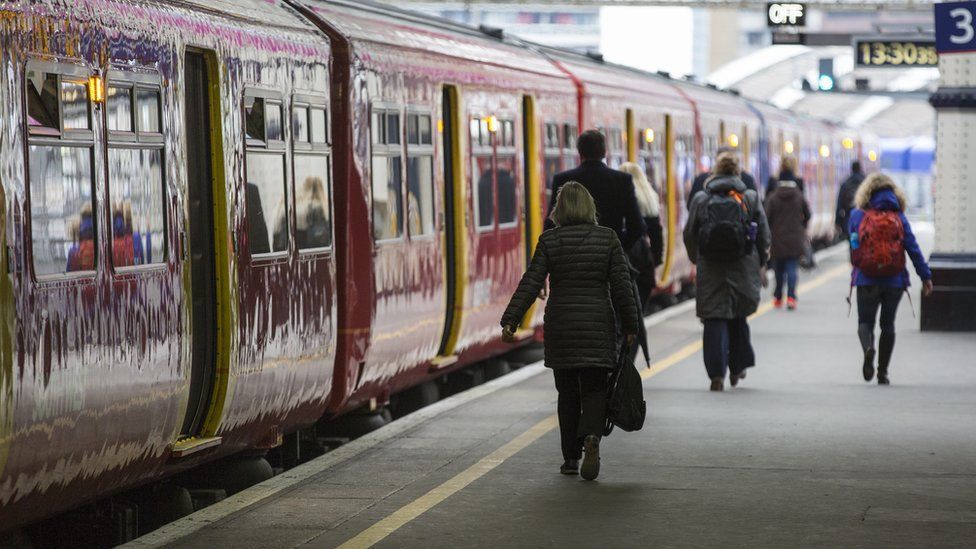 Passenger numbers on weekdays are still lagging below pre-pandemic levels

The Department for Transport says a "fair deal for staff, passengers and taxpayers" is needed.

A spokesman said emergency funding for the railway had been "merely financial life support", and "significant change soon" was needed to secure its future.

The Rail Delivery Group (RDG) represents train companies. Its view is that the railway needs to adapt to changed travel patterns.

It believes the RMT ballot is premature, as does the government, and says a strike would put the industry's recovery at risk.

An RDG spokesman said all operators wanted to offer their staff a pay rise and were "acutely aware of the cost of living pressures being felt by workers and families across the UK".

However, they said, "as an industry we have to change our ways of working and improve productivity to help pay our own way", instead of asking passengers to pay even higher fares or "asking taxpayers to shoulder more of the burden".

One option on the table as part of modernisation plans is to close hundreds of rail ticket offices. The Rail Delivery Group says no decisions have yet been taken, and that companies want to work with unions on how to address changes. 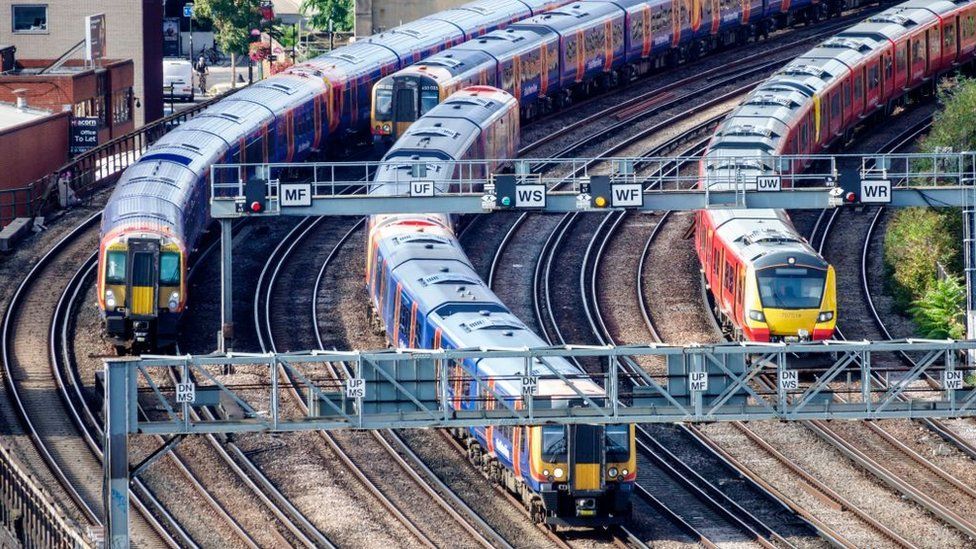 He added: "Passengers have always been opposed to ticket office closures and the public does not want a de-humanised, AI-controlled, dystopian network, that severely disadvantages disabled people, the elderly and women travelling alone at night."

Another union, the Transport Salaried Staffs' Association (TSSA) is also in dispute with Network Rail and train companies over pay and conditions.

So far it has not launched a ballot, but has warned a nationwide strike co-ordinated with other unions is a possibility.

Its General Secretary, Manuel Cortes, has warned of a "summer of discontent" if the Department for Transport, train companies and Network Rail don't propose pay increases "which at least match inflation".

Network Rail's regional managing director Tim Shoveller said: "We know how important a pay increase is for our people and we want to give a pay rise. As a public body, it is important that any pay increase is one the taxpayer and passengers can afford."

"We continue to talk with our trades unions to find solutions on pay, and will do everything we can to avoid damaging industrial action which would harm the industry's recovery from the pandemic, cost millions of pounds and undermine our ability to afford the pay increases we want to make."