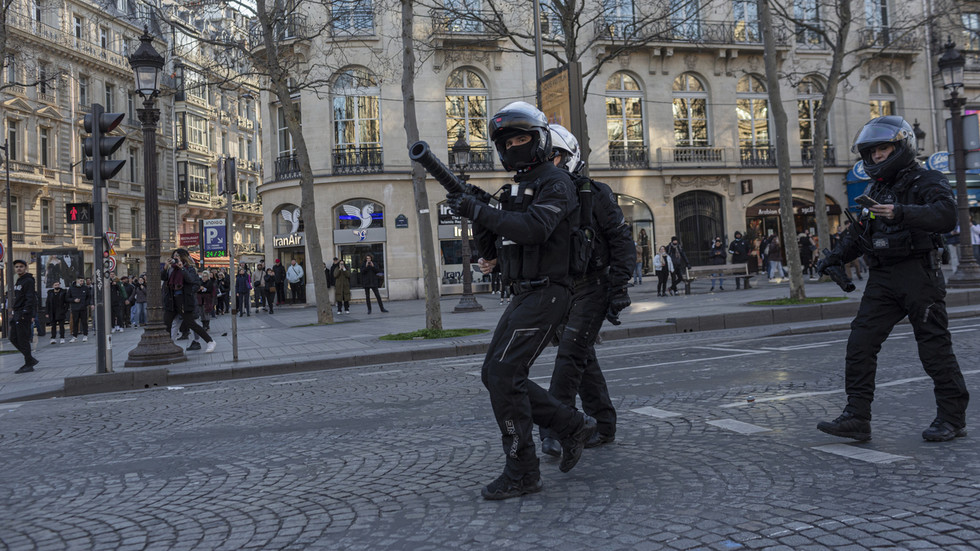 The situation with Canada-inspired trucker protests is particularly delicate in France because of the upcoming election
The ‘Freedom Convoy’ has well and truly arrived in Europe. Inspired by the protests in Canada, those opposed to mask mandates and Covid passports have descended on Paris and caused a day of disruption on Saturday, resulting in tear gas being fired and over 50 arrests. The protesters now plan to move on to Brussels for an even larger Europe-wide demonstration.

Unlike in Canada, the authorities in France, which encounter regular protests, were more prepared. The French police made it clear that those found to be blocking roads would be fined 4,500 euro, and over 7,000 officers were deployed to strategic toll booths to prevent the truckers from entering the city. But this did not deter those determined to protest against President Emmanuel Macron’s Covid rules, which were brought into force in January. Indeed, convoys travelled from as far as Toulouse, Le Mans, Nice, and other cities, to converge on Paris.

Although the French police claimed that they had prevented at least 500 vehicles from entering the city and had handed out 300 fines, around 3,000 vehicles of the ‘Freedom Convoy’ managed to make it into the centre of Paris and block the Champs Elysees.

But in the grand scheme of things, what does this all mean? There can be no doubt that a sizeable portion of Europeans are frustrated by the restrictive Covid policies of their governments, and some are prepared to act. The situation, however, is politically more delicate in France than anywhere else, as the presidential election is due to take place in April.

That alone helps explain why President Macron has been relatively restrained in his denunciation of the protests, merely admitting that there was “fatigue” linked to the Covid outbreak and calling “for the utmost calm.” This represents a sharp change in tack from Macron, who only last month said that he wanted to “p**s off” those who refused the vaccination and were opposed to his Covid passport scheme. It seems now that he is getting his wish, he probably regrets his previous bravado.

Macron’s somewhat subdued response is because he knows that he cannot afford for the situation to escalate so near to the presidential election. Language matters in politics and Macron understands that he needs every vote to secure a second term in the Elysee. Moreover, the last thing the French president wants is a resurgence of something similar to the Yellow Vest campaign, which brought Paris to a standstill and blighted his presidency in 2018 and 2019.

Yet on the other hand, this is precisely what his opponents, who are trailing him in the polls, need to happen. Marine Le Pen, for example, has said that she “understood” the protesters’ goals and pondered whether it was the beginning of “another form” of the Yellow Vest demonstrations. Therefore, for Macron at least, the stakes are too high for grandstanding and robust denunciations of the current protests.

Whereas Macron has been somewhat restrained, this has not been the case with the media, which is eager to accuse the ‘freedom convoys’ of being part of some global far right plot. Indeed, in Canada the truckers have been painted as “white supremacists” by politicians and the media, and Canadian PM Justin Trudeau accused the truckers of “hate, abuse and racism.” Unsurprisingly, the US media is also indulging in these far right conspiracy theories, which has been augmented by the fact that their bogeyman, former President Donald Trump, has voiced his support for the Canadian truckers.

Anyway, back to Europe. From Paris, the protesters will move north to the heart of the European Union, Brussels. On Monday, they plan to meet with truckers across Europe who intend to bring the Belgian capital to a standstill and disrupt the European District, which houses the European Parliament, the European Commission, and the European Council.

The Belgian government is clearly taking the threat seriously and has increased border checks. In addition, the Mayor of Brussels Philippe Close has announced that he and Belgian ministers have banned the ‘Freedom Convoy’ because no application had been made to the city authorities to allow the protest to take place.

I have had some personal experience of how the Brussels authorities react to unauthorised street protests, and it is not pretty. Back in 2007, UKIP held a protest in Brussels against the proposed EU Constitution with an inflatable bulldozer. The authorities claimed we had not made the correct application and our inflatable was slashed, bringing our protest to an abrupt end.

The truckers, however, do not seem to be deterred and are determined to continue with their protest in the Belgian capital. For example, one Flemish supporter wrote on a Telegram group called Belgian Convoy, “they can’t stop us … go on and fight for your freedom. Screw this s**tty government, banned or not.” Moreover, the authorities will find that removing a thirty ton truck will be more difficult than an inflatable bulldozer.

So now all eyes turn to Brussels for the Valentine’s Day protest. I am pretty sure from past experience of the Belgian authorities that love will not be in the air. No one is really sure how and where these protests will end, or how it will affect the French presidential race. But Macron’s subdued response, which was devoid of his usual swagger, shows that he needs the protests to end as quickly as possible and that he cannot afford an escalation. What is for sure, however, is that these protests have the potential of disrupting daily life in the capitals and irritating the hell out of the authorities and the politicians. If anyone is really listening, only time will tell, and we will no doubt find out when the French go to the polls in April.
#Donald Trump  #Covid
Add Comment