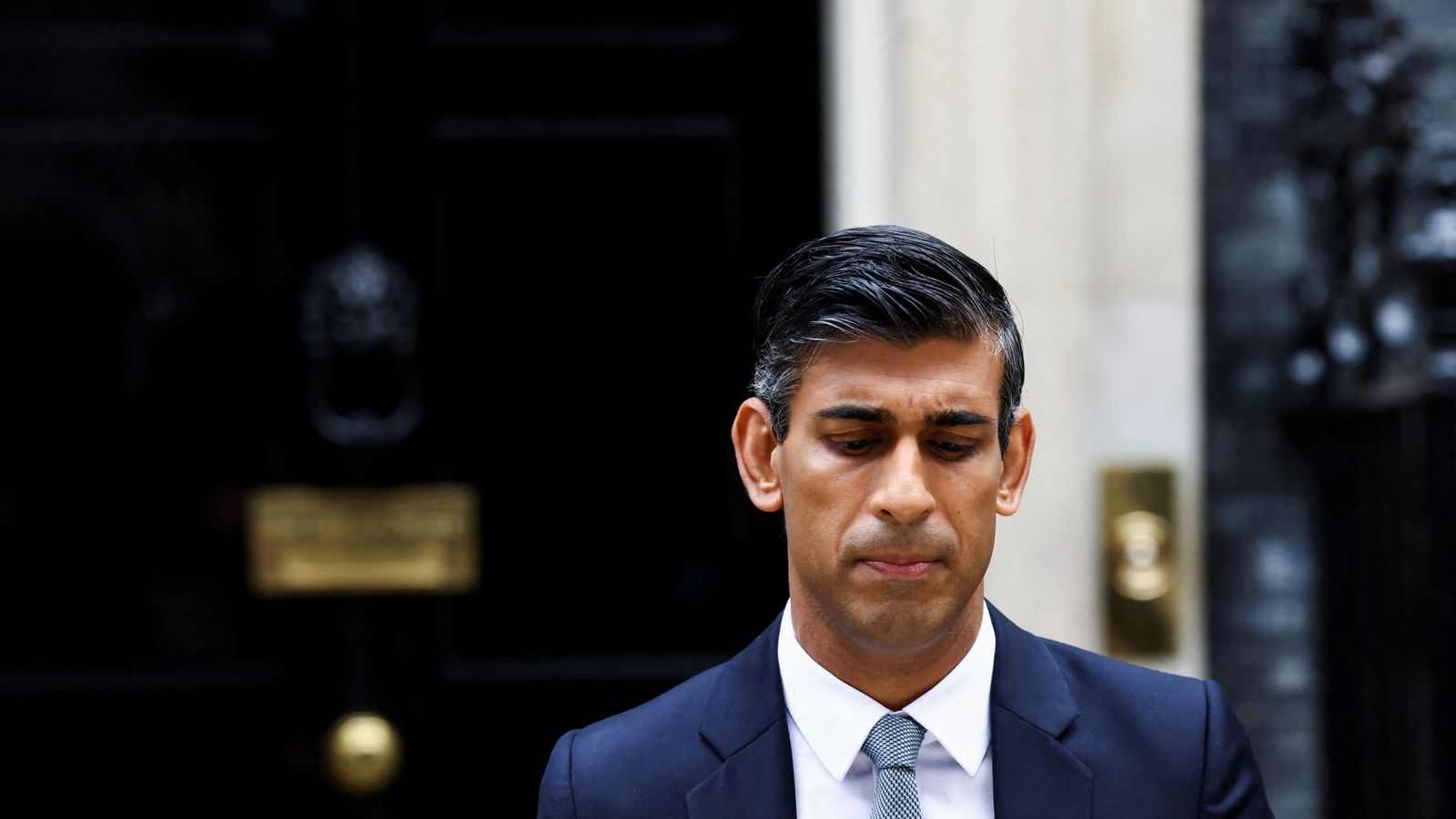 Why is Rishi Sunak casting such a sombre mood? It's more about politics than economics

Much of the damage from Liz Truss's mini budget has now been erased - so is the UK really facing what the new prime minister describes as a "profound economic crisis"?

Rishi Sunak says we are facing a "profound economic crisis". Big words, not to mention depressing. But do they really stack up?

Is the UK really facing something unique? Can he really blame much of it (as was implicit in his speech) on his predecessor? Or is something else going on?

Let's start at the start.

There is no doubt that the UK is facing tough economic times right now. We are quite plausibly in the teeth of a recession. Look at measures like the purchasing manager's index from S&P Global - a measure of how businesses are faring right now - and it is contraction territory. This is a recession warning, and no mistake. 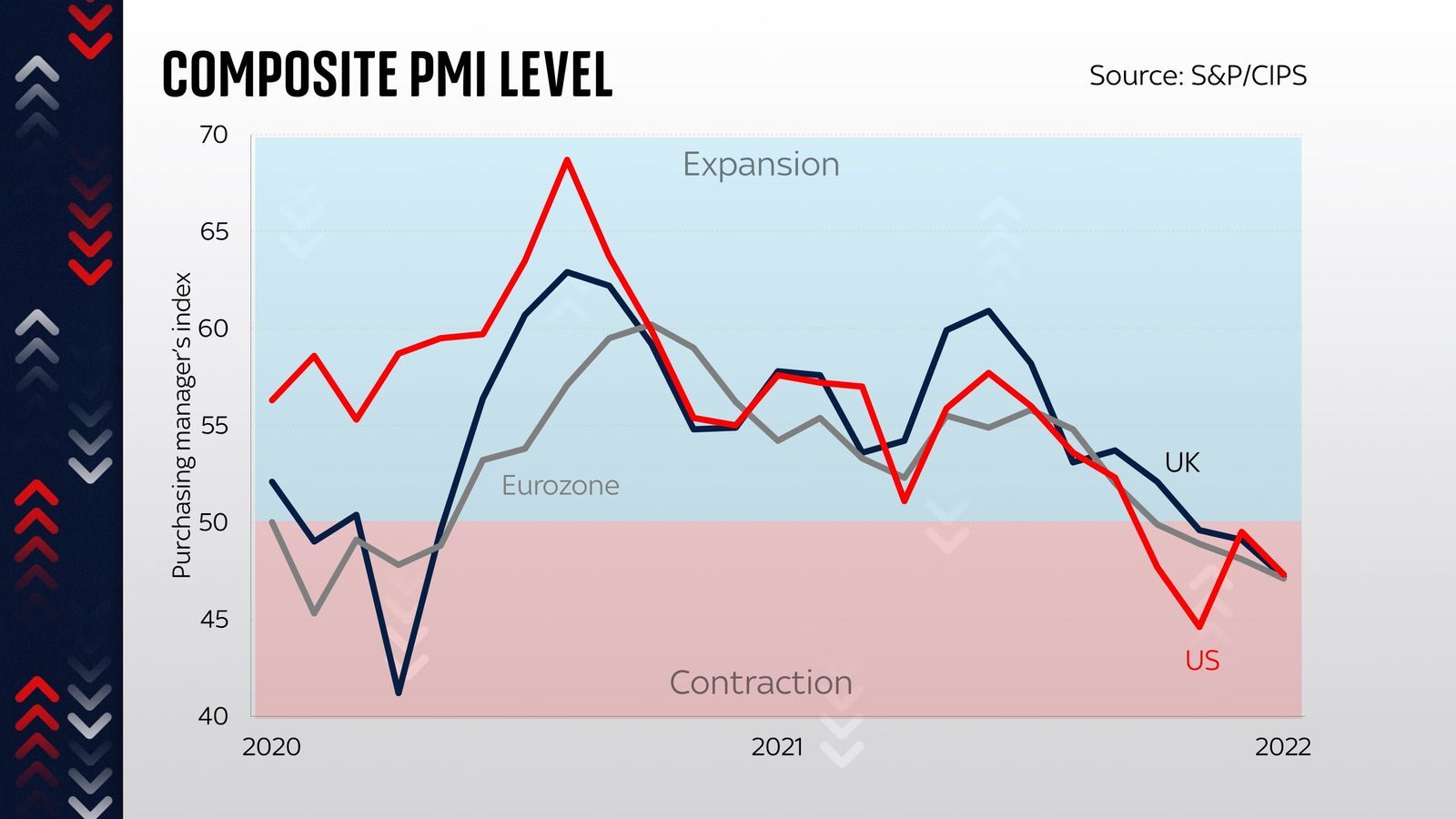 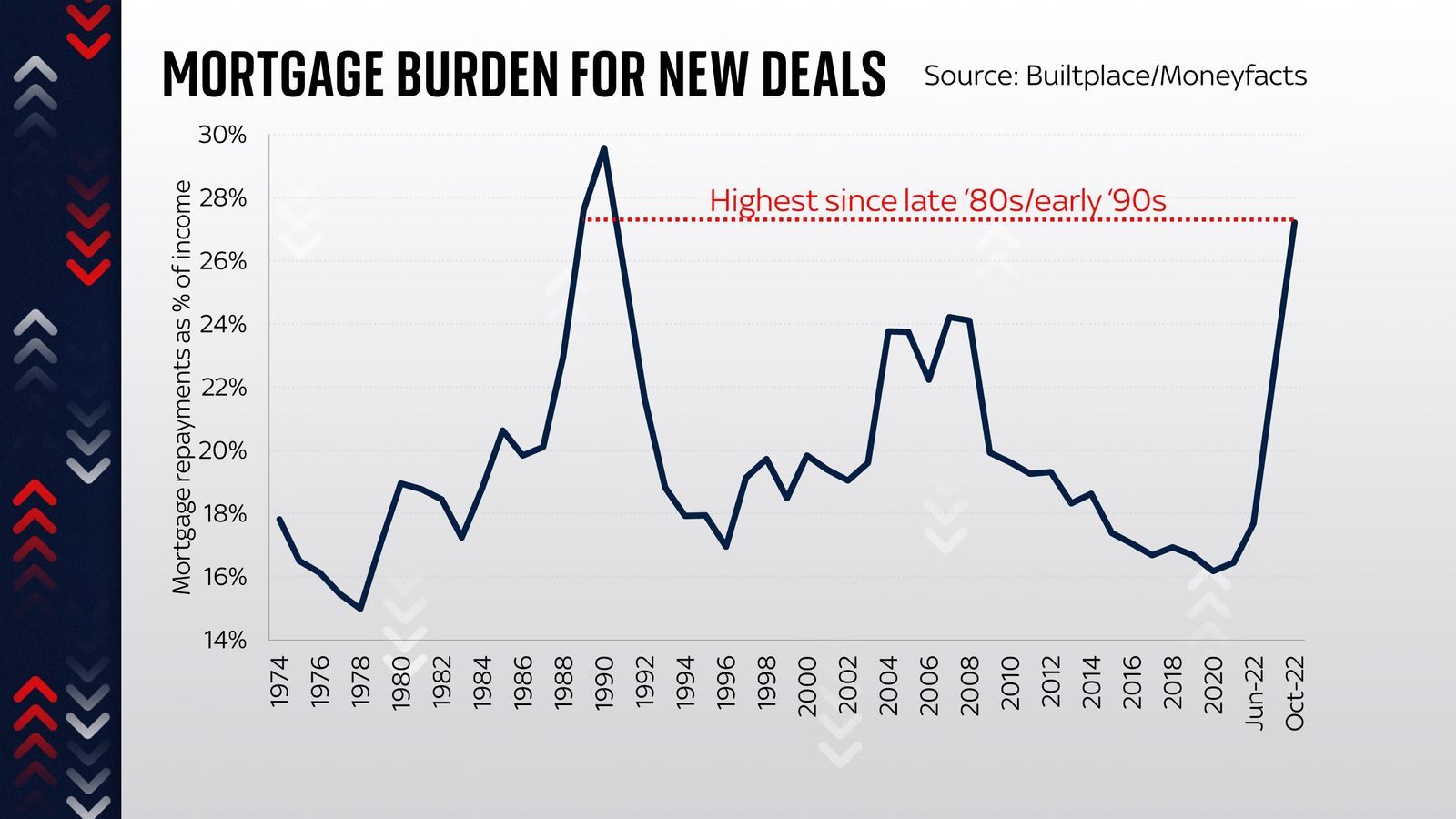 And there are certainly some factors which will make this a grim year or two for households. For one thing, mortgage costs are rising, and rising fast. The average two-year fixed rate mortgage is currently up above 6%, a level which implies the highest repayments as a percentage of household incomes since the late 1980s or early 1990s. This is clearly not good news.

And it's a similar story for energy bills. Even after you account for the energy price guarantee introduced by Liz Truss, the amount the average household spends on energy this winter will still be the highest we've seen since at least the 1950s. Again, not good news - and note that since the scheme has been shortened from two years to six months, it's quite plausible the costs are even greater next year. 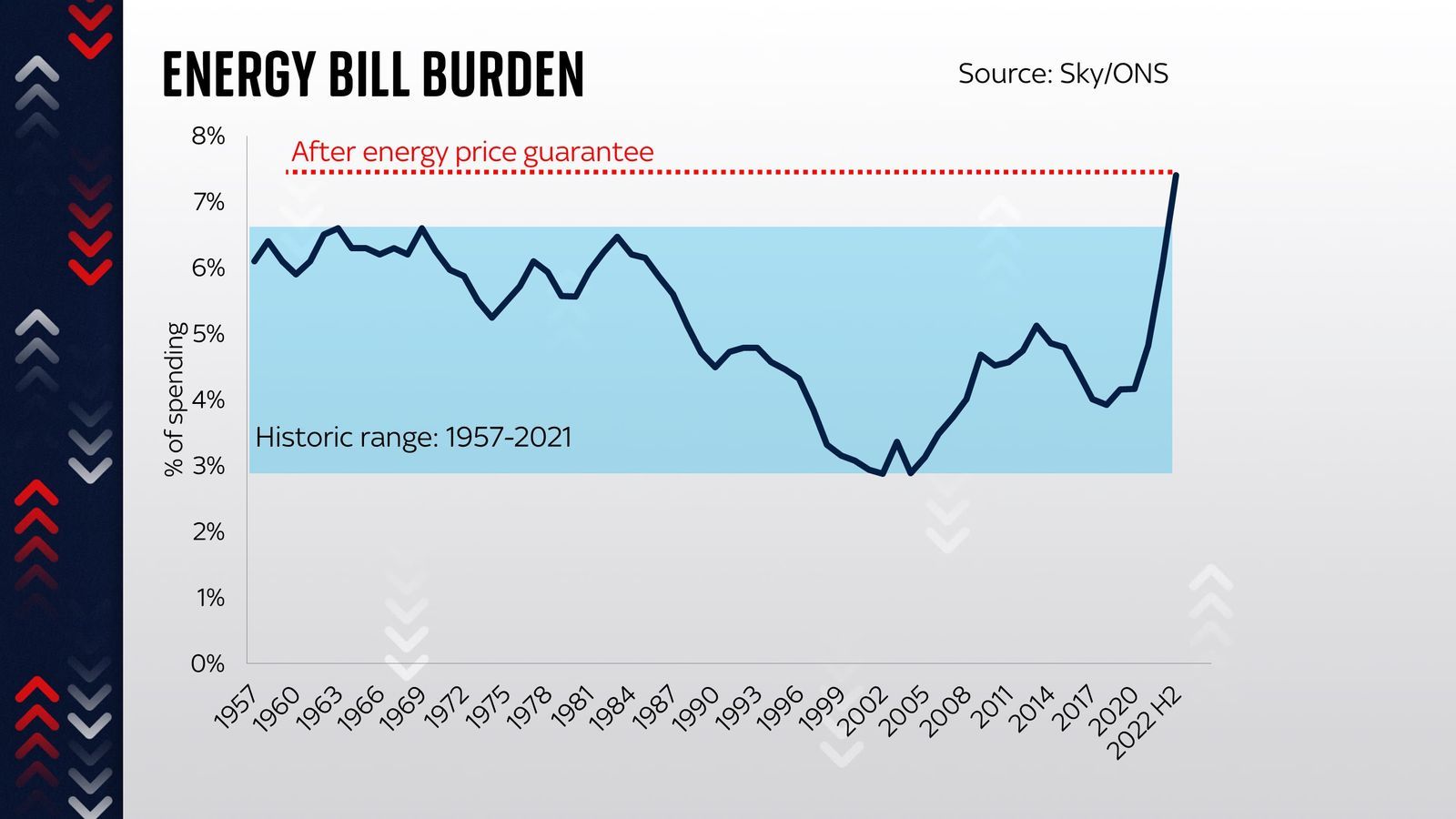 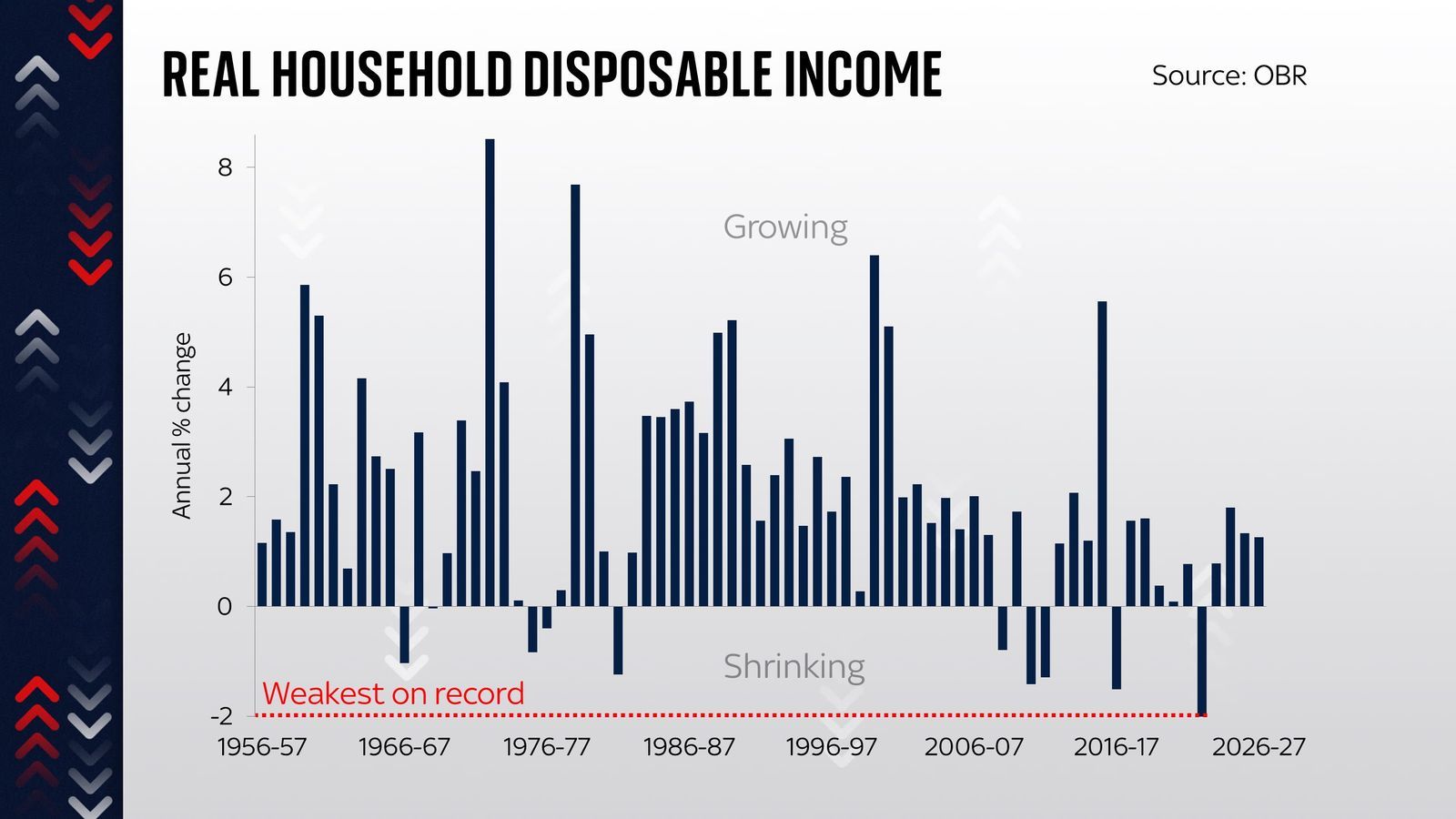 Put it all together and any measure of our collective standard of living suggests an astonishing fall this year. We are all going to be much poorer, relative to what we typically want to spend our money on. And that, in large part, is down to the impact of higher energy prices, which creep into every part of our lives.

But these are not the only issues facing the government.

One problem which no previous prime minister has been able to address successfully is Britain's productivity malaise. Output per hour is perhaps the single most important yardstick of our economic wellbeing and it has essentially flatlined since the financial crisis, making (and this is not an exaggeration) everything worse: our incomes, our quality of life, the level of taxes and national debt. 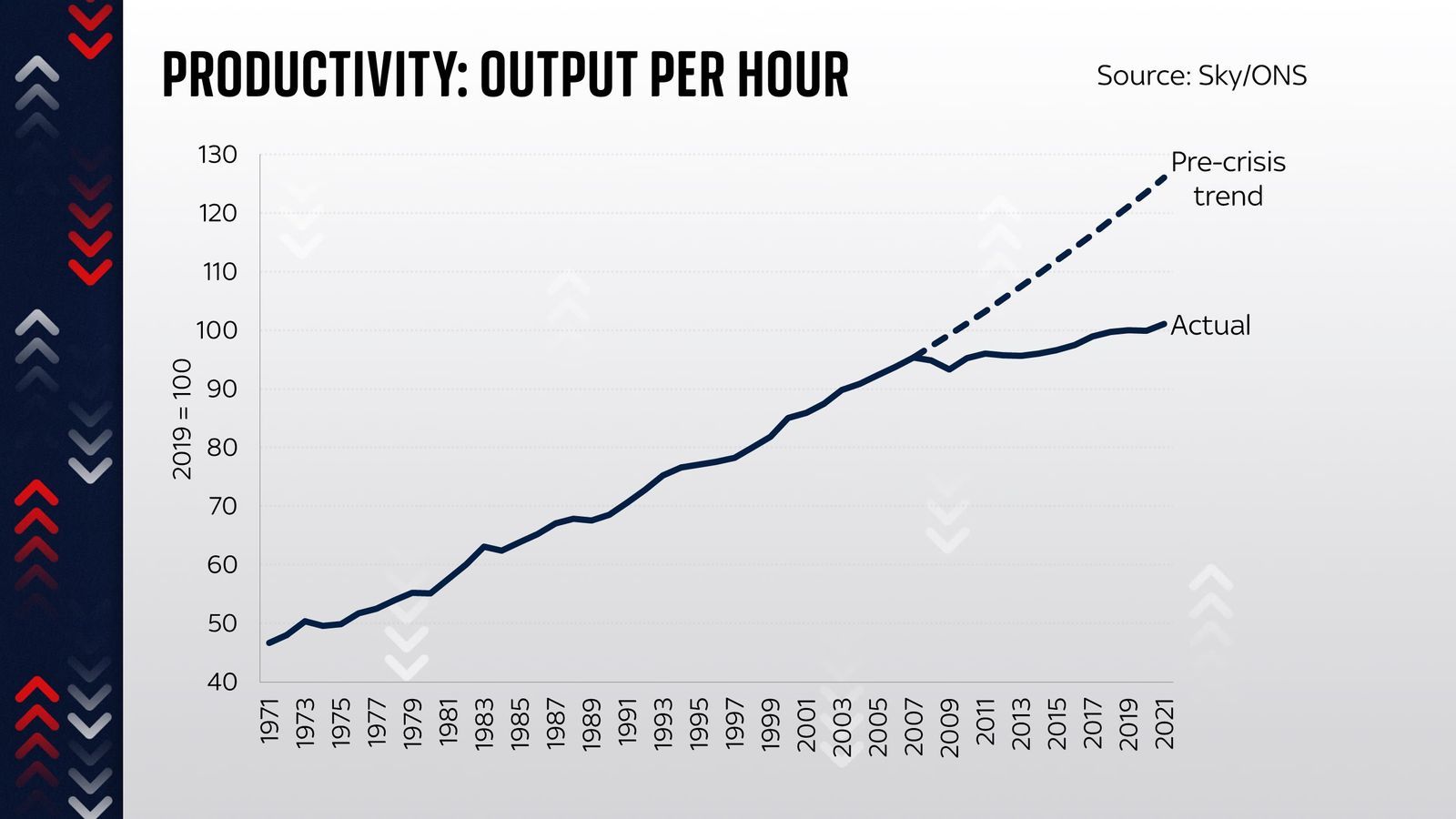 And this is before you consider the deeper issues facing the global economy right now. Most glaringly we seem to be in the early stages of a new Cold War, which could result in the creation of trading blocs rather than a fully globalised world. And this prognosis is, frankly, more optimistic than many. This will have enormous economic implications.

But here's the thing. None of these challenges are necessarily Britain's alone. The UK is not the only major economy facing a potential recession: others in Europe will probably have even deeper contractions this winter. Disappointing productivity is something many developed economies struggle with. Interest rates are rising everywhere (even if the UK's recent increase in borrowing costs outpaced other nations).

Many of the current problems pre-date Liz Truss

Nor is it especially fair to blame all these problems on Liz Truss: they pretty much all pre-date her. And here's the really interesting thing: the spike in government bond yields which followed her and Kwasi Kwarteng's mini-budget has now been almost completely erased.

Those gilt yields are now nearly back to where they were before. So too are expectations for Bank of England interest rates next year. This is an extraordinary turnaround - a consequence of the fact that the Truss government is no more.

But it means that actually much of the damage has now been erased. It's worth pondering this for a moment. Remember: that rise in gilt yields as international investors looked askance at the UK pushed up the potential cost of borrowing both for households and for governments. It meant that if the government carried on having to issue debt at those kinds of interest rates then its debt interest bill would have been a lot higher. The IFS calculated the ongoing cost at about £10 billion a year. That's a big deal.

But now that the "credibility premium" on government debt is shrinking, that problem is no longer, well, a problem. It may soon have disappeared altogether.

Which raises a question: why did Rishi Sunak try to cast such a sombre mood on the steps of Downing Street? My suspicion is that it's about 60% politics and about 40% economics.

The politics first: if he can convince the public (and his MPs) that things are grim, it means less resistance for the inevitable cuts. Much as Covid united the party, perhaps, he thinks, the threat of economic contagion could do something similar.

If he can persuade the public that the bad news he's meting out is down to Liz Truss rather than his own policies as chancellor (most of these problems were problems when he was in Downing Street and had responsibility for doing something about them) then, well, that would obviously suit him. Even if it's not entirely accurate.

Sunak's warnings are only 40% economics

The 40% economics is intriguing, because there's a virtuous circle here. If he can deploy phrases like "profound economic crisis" and "difficult decisions" he can persuade markets that he's really serious about cutting debt, which in turn should push down gilt yields even lower. Which means the hole in the public finances suddenly gets smaller too.

Talking tough could actually mean he doesn't have to act quite so tough in the coming austerity mini-budget or whatever we'll call it.

Not that much of this will be detectable when the fiscal statement lands. We are clearly in for some tough cuts for the economy. But most of the challenges they are intended to address were baked in long before Liz Truss ever reached Downing Street.