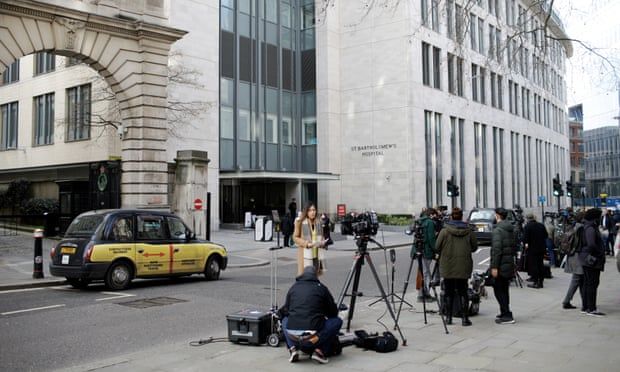 Why has Prince Philip been transferred to St Bartholomew's hospital?

It is not known if his earlier admission to King Edward VII’s hospital in central London was as a result of this condition, or unrelated. The only details previously given were that he was treated for a non-Covid-19-related infection and was responding to medication.

But his transfer may indicate that his heart condition now necessitates more specialist treatment than is possibly available at the King Edward VII, the hospital of choice for senior royals.

Philip was given a stent in 2011 for a blocked coronary artery after being admitted to Papworth hospital in Cambridgeshire over the Christmas period after having chest pains.

The minimally invasive procedure involves pushing a balloon into the artery and blowing it up to remove the blockage. The duke remained in hospital for a short while for observation.

St Bartholomew’s hospital is Britain’s oldest hospital, and will celebrate its 900th anniversary in 2023. It is part of the Barts Health NHS trust in the City of London.

It is a centre of excellence in cardiac care, and, according to the NHS website, has Europe’s largest specialised cardiovascular centre. Barts Heart Centre is based in the hospital’s state-of-the-art King George V building.

It has 10 theatres, and 10 cath labs, where tests and procedures including ablation, angiograms, angioplasty and implantation of pacemakers are carried out. In total it has more than 300 general, cardiac and critical care beds.

The NHS has said that the centre aspires to perform more heart surgery, MRI and CT scans than any other service in the world, and boosts survival rates well above the national average.

In January 2020, the service was rated No 1 for cardiac arrest survival rates in London.

The website adds: “We serve our local communities across London and Essex, but also treat people from the rest of the UK. Our patients come first and we provide the highest standards of care in truly world-class facilities.

“Our multidisciplinary teams aim to give you the best possible care, in comfortable surroundings, with access to the very latest investigations and treatments. You’ll be in good hands – our survival rates are well above the national average.”
#COVID-19  #Covid
Add Comment